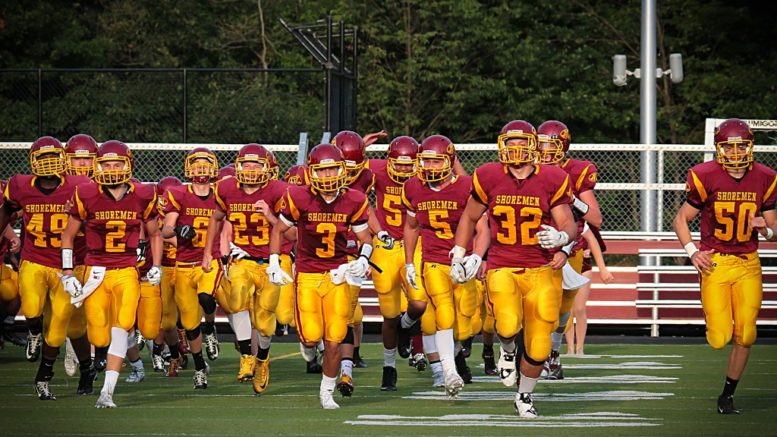 This game recap is brought to you by Setta Trophy Inc, “Celebrating Champions for over 40 Years” visit them at www.settatrophy.com

Avon Lake- The Avon Lake Shoremen came into tonight’s game with plenty at stake and an opponent very capable of squashing their playoff hopes. On a crisp night at Avon Lake Memorial Stadium, the Shoremen took care of their business with a 49-28 victory over a feisty bunch of Eagles of North Olmsted.

Sr. QB Mark Pappas completed 18 of 25 passes for 325 yards and 3 TD’s, to lead the offensive explosion that amassed 536 yards of total offense. Sr. RB Tyler Nelson did his part with 21 carries for 186 yards and 3 TD’s for Avon Lake, who will now await the final OHSAA computer rankings on Sunday.

North Olmsted opened the scoring 3 minutes into the game with a very quick 3 play 68 yard drive, aided by a 63 yard run by Sr. RB Christopher Jones, who had a fabulous night with 18 carries for 123 yards and a score and also caught 1 pass for 32 yards and another score. Moments later Avon Lake tied the score with a 35 yard pass play from Pappas to Sr. WR Toy Carson, who caught 4 balls for 116. Sr. Jason Sullivan caught a 10 yard pass from Pappas and Avon Lake led 14-7 after 1 quarter.

In the second quarter, after the teams traded punts, Pappas connected with Jr. Caleb Burr on a perfectly thrown 32 yard pass to make the score 21-7. The Eagles came right back as Jones scored on a 22 yard run to close the gap, 21-14. Carson scored again for the Shoremen on the ensuing possession from 8 yards out, and after a pass from North Olmsted QB Brandon Maximovich to Jones right before the half, it was 28-21 at the break. Maximovich had a great night in a losing effort going 16-26, 240 yards and 2 TD’s.

It was the Tyler Nelson show in the second half, he scored 3 times with TD runs of 63, 12 and 12. North Olmsted’s only second half points came on a 54 yard pass from Maximovich to Sr. Joshua Hufstetler, who pitched in with 3 catches on the night for 91 yards and one score.

North Olmsted ends their season with a disappointing 2-8 record but their future is bright. They are the epitome of team play and what they had to withstand this year by having to play all of their games away from home are a tribute to their dedication. Avon Lake finishes the regular season  at 7-3 and will sit intently to find out if or who their next opponent will be in the Division II playoffs.