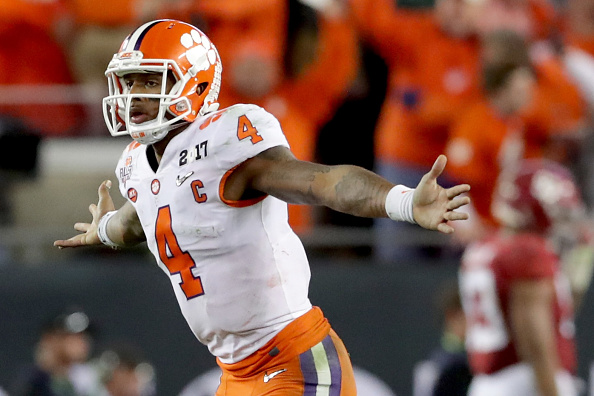 It may have been presented in a joking manner, but yet another possible high draft pick is trying to sell the Dallas Cowboys to trade with the Browns to draft him, and this time even gave the Browns an interesting package in return.

The player taking center stage this time is Clemson Tigers quarterback DeShaun Watson, who was presented with the Davey O’Brien National Quarterback Award in Fort Worth, Texas, on Monday.

It was at that time that Watson, who some say the Browns will take with their second first round pick (12th overall) and some say the team will take him umber one overall, stating Dallas should make a deal with the Browns to draft him with the first pick.

Watson pitched his trade to Cowboys coach Jason Garrett, stating that Dallas should trade quarterbacks Dak Prescott and Tony Romo to the Browns so the Cowboys could snag him with the top pick.

“The Browns do need a quarterback,” Watson said, drawing laughter from the crowd. “You can trade both of them [Prescott and Romo]. I’m sitting right there. They [the Browns] need two [quarterbacks]. They need two.”

“I like being in Fort Worth, Texas, and I promise you I’ll be back here,” Watson said.

“And I told coach Garrett, ‘If I’m back here, you have to draft me.’ I know a lot of Cowboys fans, Tony Romo is healthy, Dak, I’m a huge fan, love that man, he’s been successful, but hey, I did my part, you have to do your part. I’ll see you at the Combine so we’ll talk more about that.”

What Browns Meltdown Made the NFL’s List of One of the ‘Biggest Collapses in NFL History’?
Browns receive a few Compensatory Picks for 2017 NFL Draft