Amanda Nunes Shocks The World At UFC 200, Defeats Miesha Tate In The First Round To Become The New UFC Women’s Bantamweight Champion 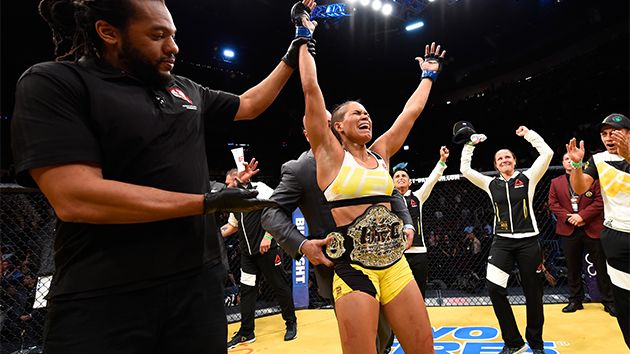 Wow, what a night.

In a truly shocking turn of events, Amanda Nunes has claimed the UFC Women’s Bantamweight Title after submitting Miesha Tate with a rear-naked choke in the first round. What’s even crazier is that the Bantamweight Title can’t seem to find a home, as Nunes is the fourth woman to hold the belt in the last year.

With that being said, UFC 200 was pretty interesting. Brock Lesnar defeated Mark Hunt in a fight that featured Brock’s impressive takedown ability. It was obvious that Lesnar wanted nothing to do with Hunt’s hands, who have been known to be deadly his whole career.

Jose Aldo made Frankie “The Answer” Edgar look like he had no answer. Besides a pretty good showing in the first round, Edgar was just not able to get anything going and as a result, Jose Aldo is the Interim UFC Featherweight Champion.

Daniel Cormier showed off his wrestling abilities to defeat Anderson Silva decisively and Cain Velasquez took out Travis Browne in the first round with his tenacity.

So, some questions to ask after UFC 200:

These are very interesting questions, which hopefully can be answered soon enough.