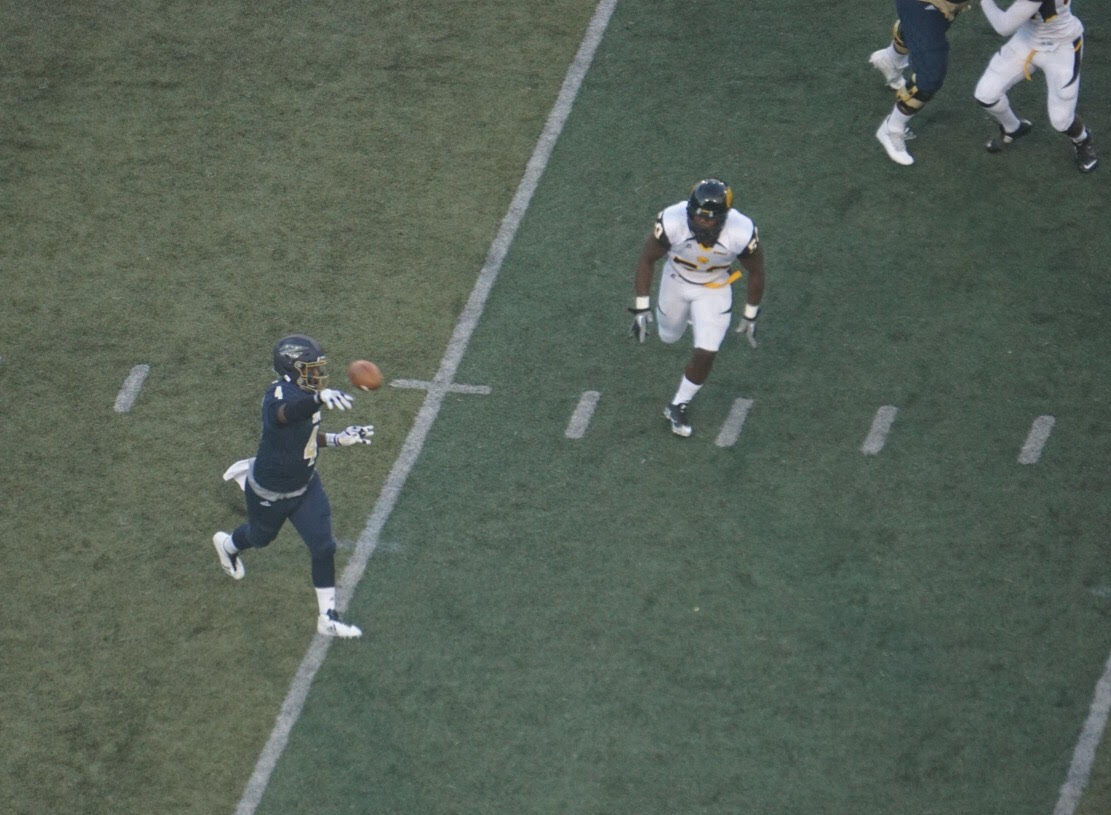 AKRON, Ohio– After taking a beating from Penn State in their first game of the year, Akron came home to host Arkansas-Pine Bluff determined to get a win in their home opener, and they were successful, bouncing back in a big way by beating the Golden Lions, 52-3.

Akron looked to establish their dominance in the trenches early on with senior running back Warren Ball taking the bulk of the carries on offense. Ball finished his night with 146 yards and three TDs on 20 carries before ultimately getting pulled in the mid-third quarter in a blow-out game.

“That’s how we’re going to win. Run the ball and play good defense,” Terry Bowden said after the game.

Ball ran the ball three times for 41 yards on the Zips opening drive, capping it off with a 12-yard TD run to put the Zips up, 7-0.

The Zips first drive was a sign of what their offense would look like the rest of the game. Bowden emphasized what they wanted to do as a team.

“We set the tempo,” he said. “Three and out on defense, drive down the field and score.”

Favorable field position assisted the Zips in the first quarter, as the Golden Lions couldn’t get anything going on offense, resulting in short fields for the Zips offense.

Warren Ball continued to make his presence felt in the first half, breaking through a hole in the Golden Lions defense for a 32 yard gain, his longest rush on the night. After the game Ball mentioned how his focus was on staying patient. “Trying to be patient, my running back coach preaches to let those guys up front do their jobs.. it was a great team win. Credit to the offensive line,” he said.

After last week’s game against Penn State where he struggled mightily, passing for only 71 yards, Thomas Woodson doubled that in just the first half against Arkansas-Pine Bluff Saturday evening as he picked apart the Golden Lions defense passing for 166 yards and a TD on 15-of-21 completions in a little over two quarters as he was pulled in the third along with Ball and replaced by backup Kato Nelson.

The Zips defense, led by defending MAC defensive player of the year Ulysees Gilbert III, did a great job of forcing the Golden Lions into multiple three and outs, giving the Zips offense a short field for the majority of the first half. Following the game, Gilbert talked about his goals for this year after such a fantastic 2016 season.

“I want to a better leader and take on a bigger role,” he said. “I want to lead this team to a MAC championship and a bowl game.”

One of the many short fields the defense rewarded the offense with ended in a 15-yard TD pass from Woodson to A.J. Conley on 3rd and 12 putting Akron up 14-0 with 6:28 left in the first quarter.

A big theme in the game was how quickly Akron’s offense was able to score, with each of their three TD drives in the first half taking less than 3 minutes.

With no success offensively to this point, the Golden Lions felt pressure to get something going in the second quarter, so they chose to run a fake punt on 4th and 12. This didn’t come as a surprise the Zips as they held the Golden Lions a yard short and received the ball back on downs.

For the first time, the Zips drive stalled out and they had to settle for a 34-yard field goal by third team All-MAC kicker Tom O’Leary. During the first play of the Golden Lions next drive, preseason MAC player of the year Ulysees Gilbert III recorded his first career interception as he picked off a pass from Arkansas-Pine Bluff QB Brandon Duncan and took it to the house for six points, putting the Zips up 24-0 with a little over 13 minutes left in the second quarter.

Golden Lions QB Brandon Duncan showed what he can do with his legs as he ran for 13 yards putting Arkansas-Pine Bluff in field goal range. After over throwing receivers on second and third down, the Golden Lions had to settle for a 25 yard field goal, finally getting points on the board. Heading into the half the Zips led 31-3.

Akron’s offensive play style changed a little bit in the second half, but their game plan was the same: feed Warren Ball the ball.

“In the second half I wanted to run the ball down their throat,” Coach Bowden said.

The Zips put together their longest drive of the game as they went 13 plays, 65 yards in 5:38. The drive resulted in an eight-yard TD scamper by Warren Ball, giving him his third of the game.  This is the first time an Akron running back has had three TDs in a game since Connor Hunter did so in 2015.

The Golden Lions started to see some success on their first drive of the second half, but after going for it once again on fourth down and not succeeding, a come-back seamed bleak to say the least.

Akron focused on running the ball and burning the clock as they continued to punish the Golden Lions defense on the ground. Van Edwards scored on a 12-yard run with 1:44 left in the third to put the Zips up 45-3. The Zips added one more late TD to make it a final of 52-3.

Arkansas-Pine Bluffs offense didn’t sniff much of the red zone all game, realistically never giving them a chance to put up any points in this game.

Akron came to play in front of their home crowd of 17,464 and they redeemed their loss to Penn State last week in a big way.

Tra’Von Chapman showed up big time for the Zips as he hauled in five passes for 55 yards.

Thomas Woodson’s performance compared to last week could best be described as night and day as he was able to spread the ball around the field with seven different receivers catching a pass on Saturday.

Golden Lions QB Brandon Duncan on the other hand had a rough day as he finished the day with 105 yards passing and two interceptions on 12-0f–23 completions.

Akron hosts Iowa State in a big game next weekend hoping to make it two in a row, while Arkansas-Pine Bluff travels to take on Arkansas State.