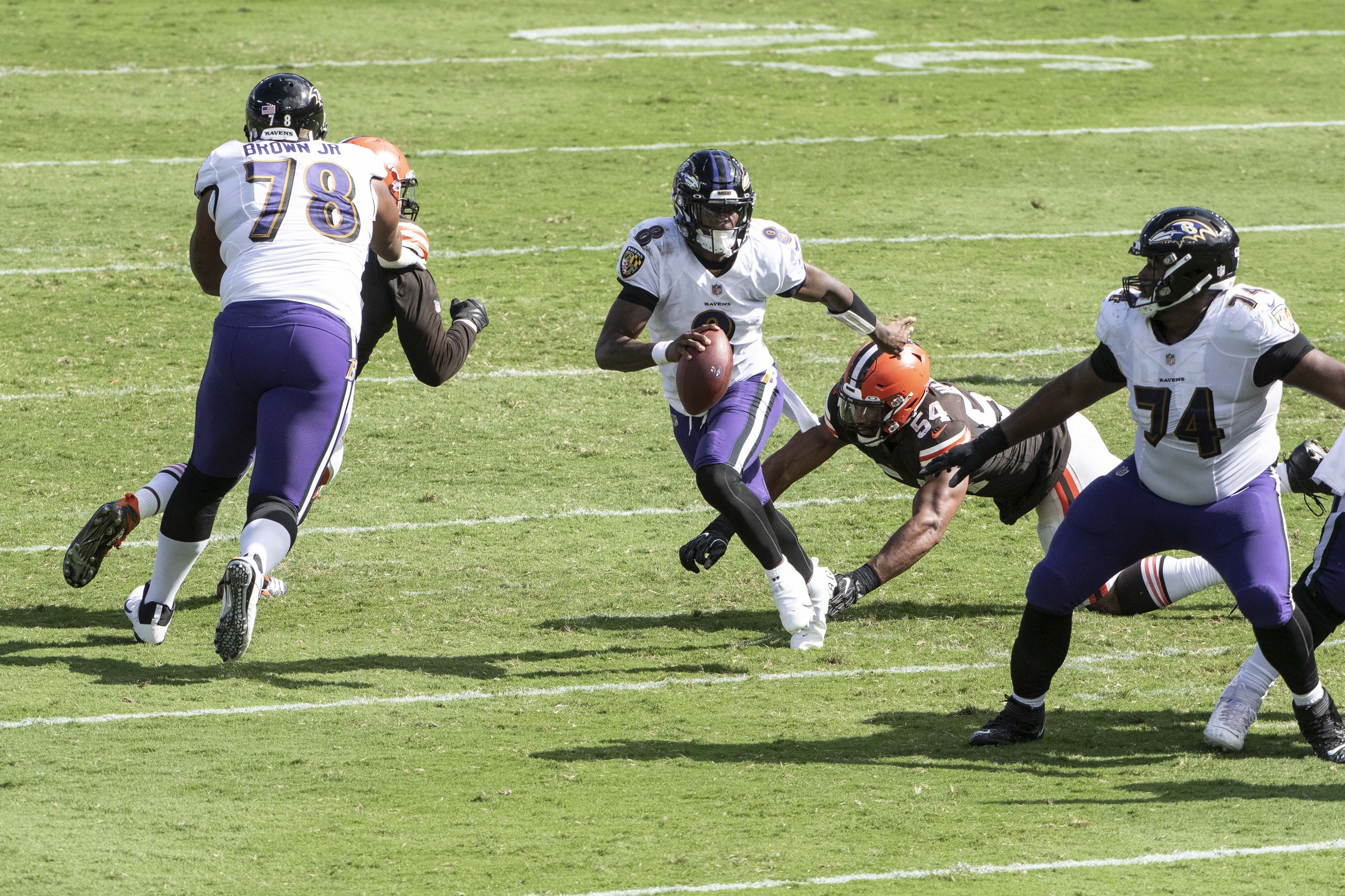 Cleveland Browns new head coach Kevin Stefanski would lead his team into action for the first time Sunday against the Baltimore Ravens. The offseason adjustments that were forced to be made to prevent the spread of Covid-19 became evident early in this game. As the Browns, the team with the new system would struggle from the lost time, while the Ravens used their continuity as an advantage, blowing out the Browns 38-6 in the season opener.

The Browns opened the game on offense, driving the ball near midfield before a tipped pass from Baker Mayfield intended for KhaDarel Hodge was intercepted by Marlon Humphrey.

The Interception gave the Ravens very good starting field position, with the Ravens taking advantage, capping the drive off after eight plays with a five yard touchdown pass from Jackson to tight end Mark Andrews.

Following up the Ravens score, the Browns would fail to convert a first down in their first three attempts. Facing a fourth down needing four yards, Stefanski opted to gamble early with a fake punt, as punter Jamie Gillan would look to convert.

However, L.J Fort would knock the ball free, giving the Ravens the ball at the Cleveland 27 yard line.

The Ravens were once again given great field position, but the Browns defense stood strong forcing a three and out. The possession would still result in points as Justin Tucker knocked in a 41 yard field goal to give the Ravens a 10-0 lead.

Down ten early, the Browns turned in an impressive six play touchdown drive to follow up the Ravens field goal. The drive started quick as the Browns only took two plays to get to the Baltimore 30, thanks to a 16 yard pass from Mayfield to Jarvis Landry, and a 29 yard run from Nick Chubb.

Kareem Hunt continued the hot start to the possession with a 22 yard second down run, giving the Browns a first and goal at the two yard line. Two plays later Mayfield would find David Njoku in the endzone, catching the Ravens selling out to stop the run on a misdirection play. Despite the touchdown, an Austin Seibert missed extra point kept the Browns total at six.

After three plays in the ensuing drive, the Ravens were facing a third and one at the Cleveland seven yard line at the end of the first quarter. At the start of the second, Larry Ogunjobi finally came up big to give the Browns their first stop of the game, forcing Patrick Ricard to fumble, with Myles Garrett recovering the ball on the play.

The Browns put together a decent answer to the fumble, driving down to the Baltimore 34 yard line. Penalties would halt the drive as the Browns would be pushed back to their own 40, facing a third and 41.

Mayfield, needing 41 yards for a first down, threw an incomplete pass to bring up fourth down. Gillan came on to punt and blasted a gorgeous kick that resulted in the Ravens taking over backed up at their own one yard line.

The great punt would come to naught as Jackson and the Ravens drove 99 yards in less than six minutes, capping the drive with a touchdown, the first career rushing touchdown for rookie J.K Dobbins, that gave the Ravens a 17-6 lead with less than three minutes to go in the half.

Facing an 11 point deficit, the Browns went to work in the two minute offense, driving down to the Baltimore 23 in five plays before taking their first timeout with 50 seconds left to go.

Coming back from the timeout, the Browns offense faced a third and two, with the play resulting in an Odell Beckham Jr. drop that forced an Austin Seibert field goal attempt. Seibert would miss the attempt wide right to keep the deficit at 11.

Momentum swung to the advantage of the Ravens after the missed field goal, as the Ravens only took 35 seconds to drive 69 yards for a touchdown to take a 24-6 lead at the half.

The Browns would open up on defense to start the third quarter, forcing a three and out of the Ravens. In turn the Browns offense would benefit from a holding penalty on Tavon Young, however three straight Mayfield incompletions resulted in a punt on the drive.

After a facemask penalty on the Browns punt advanced the ball to midfield to start the drive for the Ravens, the defense plundered. Allowing a 50 yard touchdown drive in six plays capped off by a 19 yard touchdown pass from Jackson to Willie Snead, extending the Ravens lead to 25 just less than halfway through the third quarter.

Both defenses would begin to stand tall throughout the third quarter, holding both offenses at bay, with the Ravens leading 31-6 at the end of the third.

After a Chubb fumble gave the Ravens the ball on the last play of the third, the Ravens offense would open the fourth quarter offensively. The drive would result in the final score of the game for either side as Dobbins rushed for his second score of the game, a two-yard scamper to the inside of the left pylon.

The Dobbins touchdown gave the Ravens a 38-6 lead and it was desperation time for the Browns early in the fourth. However, the Browns hopes would end on the drive, as they would face a fourth down at the Baltimore 48, before an incomplete pass from Mayfield to Beckham Jr, ended the drive.

The Browns would get the ball once more in the game, putting together a seven play possession that only gained 17 yards, ending the drive with a Gillan punt.

The Ravens would take over with just over four minutes left in the game, sending former Browns quarterback Robert Griffin III out to start the drive in place of Jackson with the game in hand. Griffin would keep the Ravens offense on the field for the remainder of the game, as a nine yard pass to Snead gave the Ravens a first down with under two minutes to go, sealing the victory.

The Browns struggled in all three phases of the game, proving the abnormal off-season could be to blame. The Browns came into the day with a new head coach and offense facing their first in-game action together in a regular season game. On the other hand, the continuity of the Ravens could contribute to the dominance shown in the game.

The positives to take away from this game are that the offense looks like it will be able to put together drives so long as mistakes aren’t made. Another takeaway is the two-headed running back tandem of Chubb and Hunt will be as advertised and the Browns should be running the offense through them.

Nevertheless, the Browns were dominated in week one and we are left wondering just what this team could be. We need to find out quickly as there is no rest for the wicked, with a short week coming up before the Browns play another AFC North rival Thursday at FirstEnergy Stadium in the Cincinnati Bengals.