A Day of Ups and Downs for Norwayne Track and Field 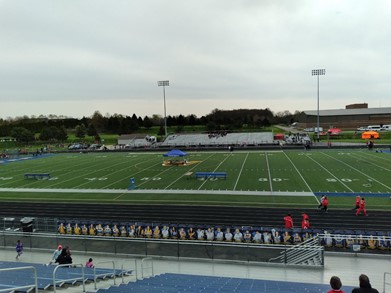 There were several highs and lows in both the sprints and distance events throughout the day. In the girls 100-meter hurdles Elise Uhler placed second with a time 16.54 seconds earning a personal best. In the boys 110-meter hurdles Connor Preattle would place 7th with a time of 17.55 seconds. Next would be the 100-meter dash where Sydney Elmer would place 5th with a time of 13.39, while both Brady Lendon (11.48) and Isiah Portis (11.66) would place 5th and 8th. In the 1600-meter run no girls or boys would place in the top 8 due to an extremely talented field and an unfortunate illness for former state qualifier Annabel Stanley. In the 400-meter dash the girls would place with Lacey Hess finishing first with a time of 1:00.36 seconds, while the boys would have to settle for 10th with no points as a result. Next arguably one of the toughest events was the 300-meter hurdles where both boys and girls would place. Derek Berger (43.64) and Jack Maibach (44.84) finished 4th and 5th. The girls would take a first-place finish from Elise Uhler with a time of 47.99 seconds. In the 800-meter run, Jaylee Wingate would dominate breaking the meet and school record once again with a time of 2:12.82 winning by a whole 15 seconds. Unfortunately, the boys would not place inside the top 8. The 200-meter dash was next with Lacey Hess placing second with a time of 26.91 seconds, while both Roman Portis (23.10) and Brady Lendon (23.78) would place 3rd and 5th.Next was the dreaded 3200 meter run with Jaylee Wingate once again placing first with a time of 11:34.11 seconds, while the boys would not place with a 9th place finish by Parker Metsker.