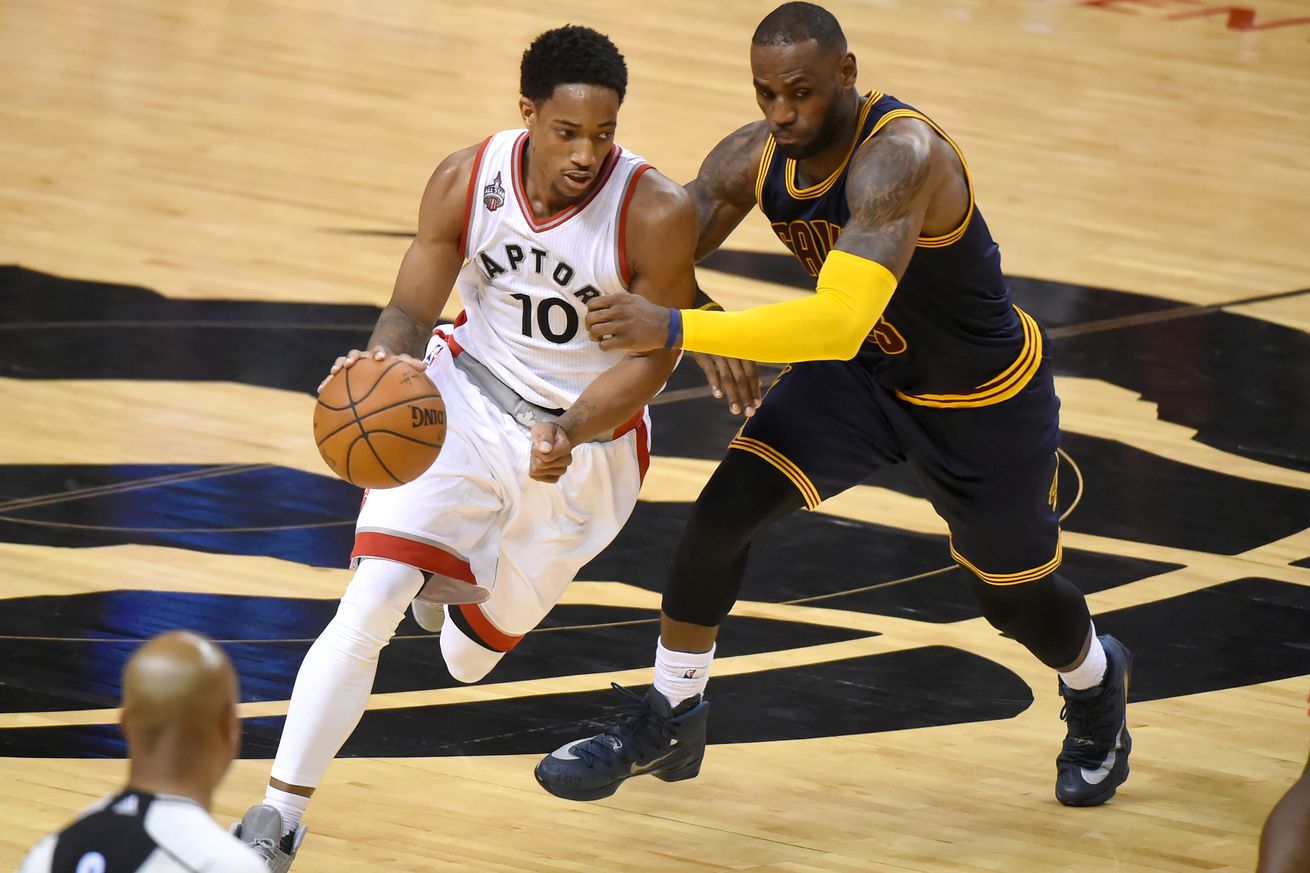 The Cavs enter game five tied with Toronto at 2-2. After winning their first ten playoff games, the team has suddenly lost back to back games in Toronto in turn causing fans to start worrying. Here are five adjustments the Cavs should look to make to finish this series in six games.

1.) More Channing Frye
Frye was the only Cavalier that was positive in the +/- from game four with a +6. Besides his -13 from game three, he has been one of the highest +/- players in the series going +17 and +12 in the first two games. His rating was the highest off the bench for half the series so far. Part of the reason for that has been his fantastic shooting. Through four games he has shot 60% (15/25) from the field and 58% from three. His impact goes beyond that as when he has played the five, it forces Bismack Biyombo away from the paint to guard him. Biyombo made himself some money with these last two games, grabbing 40 rebounds compared to just nine in the first two games. Keeping him from getting easy rebounds hanging out around the basket will take away extra opportunities for the Raptors. Frye is only getting 17 minutes a game but with Love struggling, Lue should ride the hot hand and let Frye continue to get more minutes.

2.) Less Delly
The fan favorite has not played well in the series. His shooting has been horrendous going 4 of 15 and was held scoreless in two of the four games. Outside of the shooting struggles he just isn’t athletic enough to consistently guard the talented PGs Toronto has. This was exposed really well in the Atlanta series when he was guarding Dennis Schroder. Schroder scored a career high against him as he was able to drive by him with his speed and Delly couldn’t penetrate the paint on offense to set up his lobs to the basket with Schroder’s speed. Kyrie hasn’t hit the 40 minute mark yet this series and with the window closing in he may need to play the extra minutes. Besides his uncharacteristic like game three, he has shot over 50% in all the games, something the Cavs struggled with heavily in Toronto.

3.) Keep LeBron on DeRozan
DeMar DeRozan has been a killer for the Cavs all series. He led the Raptors in scoring the first three games and despite finishing second on the team in game four, still put up 32 points. Percentage wise, he is at 52.4% on 43/82 shooting. The Cavs must shut him down if they want to win. The way that I would go about it would be trying to switch LeBron and JR Smith. LeBron has been guarding Carroll for most of the series. The difference is Carroll hasn’t put up more than 11 points in a game thus far. Size wise, there is not that much of a difference between JR, LeBron, DeRozan, and Carroll. The Cavs need their best defenders on the biggest scoring threat and that means putting LeBron and Shumpert all over DeRozan. I’d feel better about letting JR give up 20+ to Carroll and forcing Carroll to prove it offensively than DeRozan getting another 30+ game.

4.) Experiment with Mozgov
Before you roll your eyes at the headline, hear me out. Yes I agree Mozgov has been horrible this season for the Cavaliers. As of right now besides DeRozan, the Cavs biggest problem has been stopping Bismack Biyombo. Tristan Thompson who should have had a fantastic series has struggled big time against Biyombo. Frye and Love may keep him out of the paint when the Cavs are on offense but defensively Biyombo will still find ways to get offensive rebounds against them. Maybe Lue should try to experiment with Mozgov even if it’s just for four or five minutes in game five. With Biyombo getting 40 rebounds in two games and the Cavs playoff life in jeopardy, why not see if Mozgov can have an impact in say the second quarter. If he struggles then Lue pulls him out right away. If he keeps Toronto from getting rebounds then it was a genius move. For a question with no answer so far, the Cavs have to do something different to try and solve the equation and this is a possibility that we have not seen yet. Not to mention Valanciunas their star 7’0” center is active again from an ankle injury. Although he didn’t play in game four, if the Raptors struggle during game five, I would expect him to get onto the court. The Cavs will need some size to matchup against him so this is another reason to see if Mozgov has got anything in him like he did for parts of last season.

5.) Play Inside Out
LeBron said it best when he claimed the Cavs were not a jump shooting team but a balanced one instead. In the first two games of the series the Cavs attempted a combined 41 three pointers. In games three and four the Cavs took 41 threes each. It’s no surprise the Cavs won the first two while losing the later two. Simply put the Cavs need to find a way to get back into the paint where they can make a higher percentage of shots. The fourth quarter of game four was a great example as the Cavs cut into the lead with 11 straight baskets set up by a lot of backdoor passes to Richard Jefferson for easy baskets around the rim. For the four games in the series the Cavs three point % has been 35, 33.3, 34.1, and 31.7%. They’ve been consistent with how well they shot from outside so with doubling the amount of threes attempted why have they scored far less points? The answer is the Cavs shot much better with easier shots inside the arc with a FG% of at least 50% in the first two games while going under 50% in the next two. Toronto has made adjustments defensively to not let them get the easy buckets like they did in the beginning, but the Cavs still have two of the best attacking players in the NBA between LeBron and Kyrie. They need to be aggressive and get inside and either make the buckets or find the open teammates who can make the shot when the help comes to the paint. That would include giving more playing time to the shooters that have been hitting of late such as Channing Frye and Richard Jefferson. This team needs to look at what worked in the first two games and that starts with playing inside out.