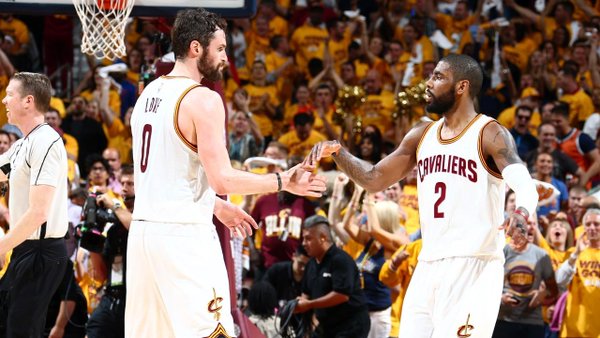 The Cavaliers silenced critics on Wednesday night against the Toronto Raptors, returning home for a Game 5 116-78 blow out to take a 3-2 lead in the series.

After about five minutes, the game was never in reach the rest of the way.

Kevin Love in particular removed all doubt after a rough two games up north, as the power forward came out rejuvenated on his home floor, hitting his first four field goal attempts.

Love would score 12 points in the first quarter, 19 in the first half, and finished with 25 points on 8-of-10 shooting.

LeBron James did his usual work, scoring 23 points to go with six rebounds, and eight assists.

Kyrie Irving scored 23 points, as well, proving that he has rebounded nicely after two less than stellar performances on the road.

One of the more encouraging aspects of Game 5 for Cleveland was that Tristan Thompson bounced back from a couple of bad games, hauling in ten rebounds, while containing Raptors center Bismack Biyombo to just four boards on the night.

The Raptors’ all-star duo of Kyle Lowry and DeMar DeRozan, who combined for 67 points in Game 4, were held to a combined 27 points on 7-of-20 shooting.

The Cavs Big 3 combined for 71 points.

Whether it was as simple as returning home, or the two losses gave the Cavs a kick in the rear end, it was clear from tip-off that this Cavalier team came out with energy and was determined to not be outworked and out-hustled like they were in Toronto.

The series returns to Toronto for Game 6 on Friday night, as the Cavaliers look to end the series and advance to the NBA Finals for the second-straight season, and third time in franchise history.

The Cavs are 5 wins away from a title.

5 Adjustments The Cavs Should Make To Win The Eastern Conference Finals
Amazingtickets.com is your one stop shop for everything North East Ohio and Beyond!