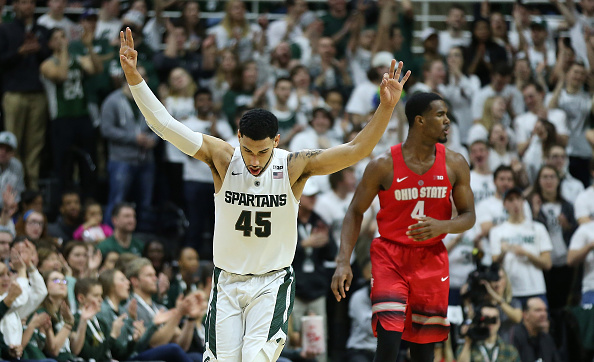 It was not a pretty day for the Buckeyes in Easy Lansing, as Michigan State beat up Ohio State 91-76, dropping the Buckeyes Men’s team to 19-12 overall on the season, 11-7 in the Big Ten.

The Spartans seem to be catching fire at the right time, they are 26-5 overall and 13-5 in Big Ten play, and have won 10 of their last 11 games, good enough for the number two seed in the upcoming conference tournament.

Ohio State had no answer for Denzel Valentine, who put in 27 points and also had a career high 13 assists in the win.

Junior forward Marc Loving led the Buckeyes with 21 points in the loss, eight points over his season average. Michigan State was lights out from the field, shooting 66 percent in the win (34-for-51).

JaQuan Lyle had 18 points and Kam Williams added 15 in the setback for Ohio State, who has played better, winning five of their last seven, with both losses against Michigan State.

When asked if the Buckeyes have to win four games in Indianapolis to get in the NCAA tournament, Buckeyes coach Thad Matta was simple in his reply.

“I haven’t thought that far ahead,” he said.