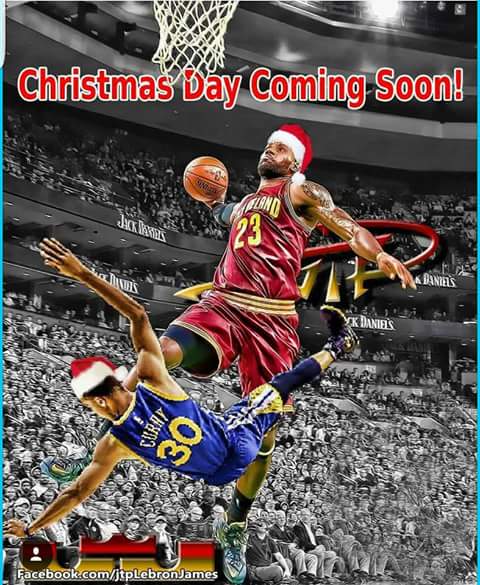 The Cavs finally have just about everybody on the roster healthy.

Kyrie Irving’s return on Sunday against the Sixers was the first time since April 26th, that Irving had been on the floor at the same time as LeBron James, Iman Shumpert, Tristan Thompson and Kevin Love.

The last seven months were a challenge for the Cavs, but maybe all of these obstacles will prove to make them battle-tested for the biggest test of all that is to come; winning an NBA Championship.

It seems fitting that the Cavs will take on the Golden State Warriors on Christmas Day with a healthy arsenal.

It’s the matchup we did not get to see in June. Basketball fans and analysts have debated ever since whether or not the Cavs would have won that NBA Finals if they were healthy, but there’s no debate that the Warriors are having the best season of any team in the league right now.

They lost Klay Thompson for a few games, but he’s back and barring any unforeseen circumstances, he’ll be on the floor Christmas Day.

Warriors’ small forward Harrison Barnes has been sidelined for a few weeks, is already ruled out for their game on Wednesday, and most likely will not play on Christmas Day. Barnes is a solid, valuable player on the team, but his absence hasn’t led to much different results for Golden State, who is rolling through basically everybody.

The game being in Oakland won’t make things any easier for the Cavs, who are 12-1 at home, but just 6-6 on the road, and even though Irving is finally playing, it’s not fair to expect him to have a huge night in just his third game of the season.

The return of Irving and Shumpert might be all that was missing the first two months of the season, and keeping the Cavs from being on the level of San Antonio and Golden State.

But even without those two significant pieces, LeBron and Love held down the fort and have the Cavs positioned with the one-seed in the East.

The question now becomes “will the team STAY healthy?”

The Christmas Day Finals’ rematch will be a great game to watch and undoubtedly the basketball universe will be tuning into see the theatrics, but in the grand scheme of things, it’s not going to have any bearing on who wins the NBA Finals.

Draymond Green will talk tough if they win and say “See, I told you we were better than them even if they were healthy.”

By the same token, if the Cavs pull off the upset and hand Golden State their first home-loss of the season, you can bank on it that the Michigan State alum will say something to the effect of “It’s only one game, we’re focused on the bigger picture.”

The Cavs’ fan in me wants so badly to see the Wine and Gold crush them on their home floor and ruin their Christmas, but the realist in me says Golden State is going to take care of home court and continue their regular-season dominance.

Regardless, the bigger picture is what we have to keep in mind.

After Christmas, the Cavs fly from Oakland to Portland to play the next night. They’re off on Sunday, travel to Phoenix, and take on the Suns and Nuggets in back-to-back road games on the West coast.

That stretch, including the Wednesday, December 23rd game at home against the Knicks, means the Cavs will play five games in seven days, and four games in five days.

You know what that means?

I know, it’s not a word that gets fans pumped up, but when keeping the ultimate goal in mind, it is essential.

Around this time last year, LeBron took some time off to re-cooperate. He came back and played at an MVP level the rest of the season.

This year is a bit different. The Cavs are in a better situation in the standings. LeBron has been relatively healthy compared to the rest of the team.

So will he use this next stretch of games for rest or continue to play through it?

If the Golden State game is as competitive and hard-fought of a contest as we envision it to be, it would make sense to see LeBron get some rest against Portland the next night. The Trail Blazers aren’t a great team, anyway, but they did give the Cavs a heck of a ball game two weeks ago in Cleveland.

Head Coach David Blatt may not want to throw Kyrie out there back-to-back nights, as he will only have played three games since returning from a six-month lay-off, and going up against Steph Curry and Damian Lillard on consecutive nights is not exactly what would be considered “easing your way” into NBA action.

The other two games after Portland are interesting because the Cavs travel to Phoenix and Denver, but then have three days off after the Denver game.

The Suns and Nuggets are similar record-wise, and looking at the schedule, if Blatt does not want to play LeBron both games, you could make an argument for resting him either night.

If I had to guess, they would rest LeBron against Phoenix on Monday, and play him Tuesday versus the Nuggets, knowing he will have the next three days to rest.

However, maybe after the Golden State game, LeBron sees the next three-game stretch as a bit of a “mini-vacation” like he took for a couple weeks last season.

The schedule does not get very tough after Christmas until January 14, when the Cavs travel to San Antonio. If there was any sort of “break in the action” in terms of strength of schedule difficulty, it would be from December 26th to that matchup with the Spurs.

So, if we are going to see any type of mid-season hiatus from the King, it would most likely be right after Christmas.

Maybe I’m looking too far ahead. This Christmas game is going to be awesome! But now that we’ve gotten over the thrill of having a great team in town and are just used to it, one of the priorities has to be what’s best in the long term.

The other day I heard a radio host say he was bored with the Cavs winning so much. In the same breath, he talked about how excited he was to watch Johnny Manziel on Sunday, and the next day the inevitable happened, the Browns got stomped.

If you’re a die-hard basketball fan, you’ll get excited over anything the Cavs do. But as much as I disagree with that radio host “not caring” about the regular season, it brings to mind the reality that between now and April, ALL that matters is staying healthy.

Coach Blatt and company got a clean bill of health under the Christmas tree. Let’s top it off with a win on Friday, but more importantly, keep that health the main priority as we enter the New Year.

Merry Christmas to all! Go Cavs!