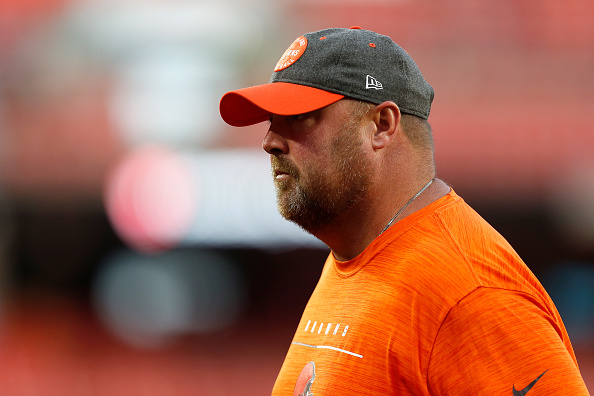 I’m one of the many who found Freddie Kitchens’ post-game routine from Sunday a little refreshing. Hearing a coach take accountability in defeat, especially after a loss where his Cleveland Browns struggled largely due to his handling of the offense, was a nice change of pace compared to what we’re used to with this team.

That said, it was suggested yesterday this accountability routine will have its flaws exposed if nothing changes for Cleveland on the field. If you ask me, though, we’re already starting to see cracks in Kitchens’ “I’m to blame” approach.

Look no further than his press conference from yesterday, when he was asked about the possibility of handing play-calling duties over to offensive coordinator Todd Monken. After all, it was Kitchens’ peculiar plays which seemed to keep Cleveland’s offense stuck in the mud Sunday night.

In answering this question, it seems Kitchens is still humble, but only to a point.

“That’s not even feasible,” he said Monday when asked about handing Monken the keys to the offense. “That’s not being considered.”

No subtly there. However, in further explaining his stance, he leaned further into the accountability we saw from Sunday night.

“It’s my fault. It’s me,” he said. “Todd does a great job during the course of the week of making sure we stay on task, we stay organized and all that kind of stuff. But when things mess up, it’s going to be me.”

Makes sense. Obviously Kitchens still wants everyone to know he’s not afraid to blame himself for his team’s mistakes.

That said, this seems to be an odd time to lean into that shtick. Essentially, Kitchens is saying that, while everything is 100% his fault and don’t blame anyone else, it’s certainly not bad enough to even consider the idea of letting someone take something off his plate.

To me, this makes you question the limits of Kitchens’ willingness to hold himself accountable.

For the bulk of this short season, the Browns’ offense has been wildly over-complicated. Gone are the quick, fast-paced plays which kept this unit humming through the back half of last season. Instead, it’s as if Cleveland’s offense has been trying to reinvent the wheel with almost every play, leaving quarterback Baker Mayfield running for his life while his wideouts take too long to get open running lengthy routes.

Kitchens would like you to know this is all his fault. However, he certainly can’t be blamed enough to even question the idea of him handing over play-calling duties while he’s looking in over his head.

It’s an admittedly odd approach. He bent over backwards Sunday night to ensure everyone knew he was responsible for Cleveland’s struggles. On the surface, it seems like the next step in this approach would be “you know what, you’re right. I am taking on a lot right now, and it might be worth getting something off my plate while I get used to my new role.”

Instead, even suggesting this is “not even feasible.”

The fact is his play-calling has varied from head-scratching to downright bizarre this season. Kitchens needs to realize he isn’t being asked about handing things over because people think Monken would run the offense better, but more because of how badly things look under his watch. Everyone is confused about how many perplexing play calls we’re seeing from the guy who was promoted thanks to how well he ran the offense last year.

On Sunday, Kitchens sounded like he realized this. Yesterday, it seemed he still did, but only to a point.

While it’s nice to hear a coach display this much accountability, it’s odd said accountability has limits. Obviously, should the offense improve under his watch, it ultimately won’t matter.

If it doesn’t, these flaws in the “blame me” routine are going to become even more apparent. We’ll just be watching a coach who has no issue saying losses are his fault, but who also soundly rejects even the slightest suggestion of making changes as a result.

Props to Freddie Kitchens for taking accountability, but it’s meaningless if nothing changes
Damarious Randall returns to practice Wednesday