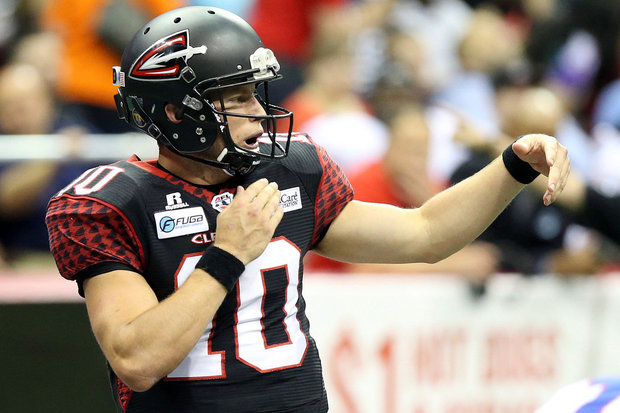 Monday night football is back in Cleveland as the Portland Steel invades the Q to take on the Cleveland Gladiators on May 16th and due to recent transactions by the Steel, “Stone Cold” Shane Austin is activated to possibly start against his former team.

Portland hasn’t won a game yet this season and are looking to notch their first win against the conference rival Gladiators. Cleveland is coming off of their second win of the season and looking to get a winning streak going against the last place Steel after defeating Arena Bowl participants Jacksonville Sharks last night in a come from behind win

Although cleared to play after a few weeks on injured reserve, Clevaland QB Chris Dieker will more than likely be on the bench this week as Ohio native Arvell Nelson will more than likely get the starting nod from coach Thonn. Nelson is fifth in the league in QB rating with a 92.1. Collin Taylor also has a fifth spot in the league in receiving touchdowns. Wide outs Domimick Goodman and Thyron Lewis should be good to go as well.

Portland wide outs Tom Gilson and Jared Perry have been solid combining for 12 touchdowns between the two. As mentioned before, former Gladiator QB Shane Austin, who was on the team for its historic 17-1 season, was activated for the first time since joining Portland because of a tryout for a CFL team. This could be an interesting development for the game to keep an eye on.

Stipe Miocic Brings Cleveland a Title at UFC 198
Lenny Barker reflects back on his perfect game 35 years later with an out by out breakdown!