Watch: Highlights Tell the Story of Cavs 106-100 Loss to Rockets 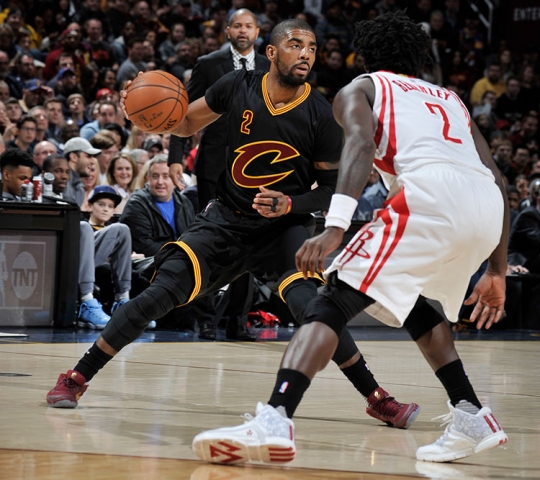 When the Cavs took the court against Houston on Tuesday night, they were without LeBron James, who got the night off to rest.

The rest of the Cavs would have to step up and the first player to do so was Kyrie Irving, who had a rough couple of days coming into the game, after a scandal caused his name to be dragged in the mud and the internet made jokes at his expense.

Kyrie set the tone with the first basket of the game, picking Patrick Beverley’s pocket and driving all the way down the court for a fastbreak layup.

Irving scored the first five points of the game for Cleveland.

Houston would answer back, getting out to a 13-10 lead, before Tristan Thompson, who broke the record for most consecutive games played in franchise history on Tuesday night, bullied his way for a basket with 7:03 left in the quarter to make it a one-point game. He drew the foul, but missed the free throw.

Houston would respond after that, going on a 13-4 run, which was highlighted by Jason Terry’s three-pointer, which made it an eight-point game with 2:09 left in the first quarter.

James Jones made a rare appearance, answering back with a three of his own, knocking down the triple from the corner and drawing a foul.

Jones made the free throw to convert the four-point play, and the Cavs would enter the second quarter trailing 26-24.

Mo Williams, AKA Mo Gotti, got back in on the action knocking down a three to give the Cavs a 27-26 lead on their first possession of the second quarter.

Jones and Williams, the two veterans who have hardly played in recent months, each hit another three to give the Cavs a 36-30 lead with nine minutes left in the half.

A couple minutes later, Timofey Mozgov decided to join in on the fun with a vicious slam dunk off of a lob from Iman Shumpert.

Irving followed that up with a three to make it a nine-point game, and then J.R. Smith got the Cavs up by 11 with a floater, giving Cleveland their biggest lead of the game up to that point.

After two minutes of back and forth scoring, Irving made a difficult layup to make it a 13-point game.

The Cavs would follow that up by extending it to a 12-1 run the rest of the half, and entered halftime with a 59-40 lead.

Irving scored 15 points in the first half.

The Cavs came out of the gate somewhat sluggish to start the third quarter, as the Rockets looked re-energized from the break and Trevor Ariza threw down a monster slam dunk to pump up his team.

Houston cut into the deficit, making it a 15-point game with 8:56 left in the third quarter, prompting Cavaliers Head Coach Tyronn Lue to take a timeout.

The Rockets kept momentum on their side throughout the quarter, getting it down to a 12-point game with 6:08 left in the quarter, but the Cavs received timely jumpers from Kevin Love and Shumpert.

Michael Beasley made one of the best plays of the night, sinking a beautiful reverse layup to make it 69-56.

The Rockets managed to make it an 11-point game before Thompson and Irving scored on back-to-back possessions to give the Cavs a 76-60 lead with 3:11 remaining in the third quarter, prompting Rockets Head Coach J.B. Bickerstaff to call timeout.

The timeout seemed to pay dividends, as Houston went on an 11-5 run to get it down to a ten-point game, but Irving’s great night continued, as he knocked down another beautiful three in rhythm with 28 seconds left in the quarter.

The Cavs would enter the fourth quarter leading 84-71.

Thankfully, Richard Jefferson was able to create some breathing room with a big three-pointer to make it a nine-point game with 8:41 left.

Houston would hang around, trimming the lead little by little, cutting it down to a four-point game with 5:59 to play, thanks to another clutch bucket from Harden.

The Rockets got it down to a three-point game after Dwight Howard split a pair of free throws, as Houston found themselves in the bonus thanks to the Cavaliers getting in early foul trouble.

Beasley hit a jumper with 4:38 left to make it a one-point game, and the Rockets made a big stop. Howard would get fouled on the other end and split the pair to tie the game at 91.

The Cavs offense stayed stagnant and Beverley gave the Rockets their first lead since the first quarter, canning a clutch three-pointer to make it 94-91.

This @PatBev21 3 gives the Rockets their first lead since the 1st quarter! #HOUatCLE https://t.co/SWUOLYe5mU

Cleveland would resort to the “Hack-A-Dwight” strategy, which worked like a charm, as the big man missed both free throws.

Kyrie would split a pair of free throws, and after a Cavs defensive stop, Irving made something out of nothing, tying the game at 94 with 2:31 to play.

Harden answered back with a huge three.

Kyrie decided to one-up Harden with an even deeper triple.

Ariza knocked down what felt like a dagger with 17 seconds left, making it 101-97 in favor of Houston.

The Cavs would fall 106-100 after Houston hit clutch free throws down the stretch.