Vikings Pull Out the Win for Senior Day in Regular Season Finale, 69-55 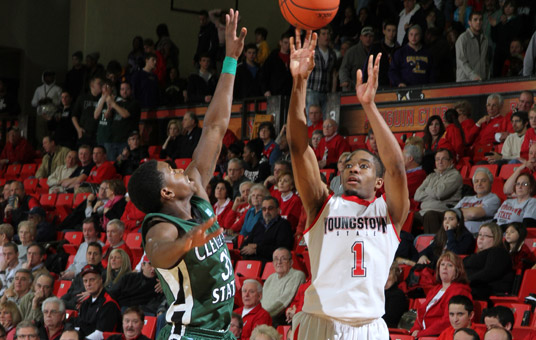 Cleveland State closed the regular season this Saturday (Feb. 25th) when the Vikings hosted Youngstown State for an afternoon bout in which the Vikings would win by a final score of 69-55. It was also senior day where Demonte Flannigan and Tim Hasbargen were honored in a pre-game ceremony.

The Vikings lead by 4 at the end of the first half, and would extend it by as much as 14 in the second half. The story of the game was the Vikings defense creating their offense. That meant that CSU had a very efficient day forcing turnovers and capitalizing on the offensive end in transition. The Vikings caused 17 turnovers for YSU and was able to make good on a majority of them with 22 points off of turnovers.

CSU’s Rob Edwards lead all scorers with 20 points along with 7 rebounds. Flannigan contributed 15 points and Terrell Hales added 11 rebounds. Jorden Kaufman had 16 points and 10 rebounds for the Penguins.

CSU finishes the regular season 9-21 overall and 5-13 in the Horizon League. This is the second consecutive losing season for Head Coach Gary Waters and the Men’s Basketball team.

The Vikings open play in the Horizon League Championship on Friday (March 3) at Joe Louis Arena in Detroit, Michigan.