WATCH: Uncut video released of Cavs huddle at the end of Game 1 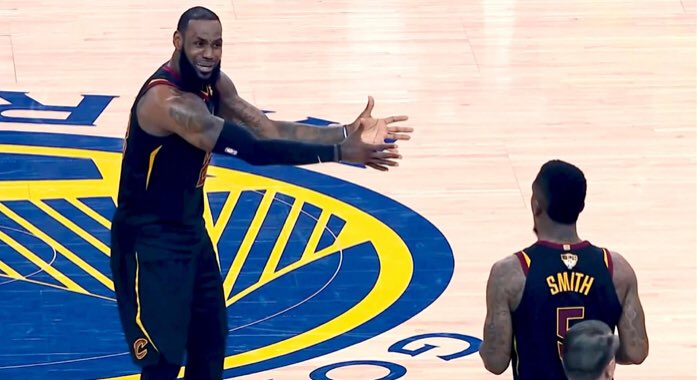 CLEVELAND– Four days later, and many Cavs fans still are wondering “What could have been?” concerning Game 1 of the 2018 NBA Finals.

With 4.7 seconds left, George Hill missed what would have been the go-ahead free throw. J.R. Smith miraculously came up with an offensive rebound, only to dribble out the clock as he appeared to tell LeBron James “I thought we were ahead.”

Still tied at 107-107, the Cavs and Warriors headed to overtime when the Warriors outscored the Cavs, 17-7. When watching the newly released footage below, it’s easy to understand the disparity that occurred in the final five minutes of game action.

The video was originally posted on ballislife.com. A despondent Smith, James and George Hill can all be seen on the bench. Arguably the most heartbreaking moment comes at the 2:19 mark when LeBron James asks Tyronn Lue if the team had any timeouts left. Lue tells James the Cavs did in fact have a timeout remaining, and James puts a towel over his head in disbelief.

Following the game, Smith was insistent that he did in fact know the score at the end of regulation. Prior to Sunday’s Game 2, however, he walked back his initial statements slightly.

“After thinking about it a lot the last 24 hours or however many since the game was over, I can’t say I was sure of anything at that point,” Smith said.

Game 3 is Wednesday at Quicken Loans Arena at 9 p.m.

Opinion: Rodney Hood Should Be Playing Important Minutes In The 2018 NBA Finals
VIDEO: Cleveland Ambassadors VS Seleccion Femenil From Mexico