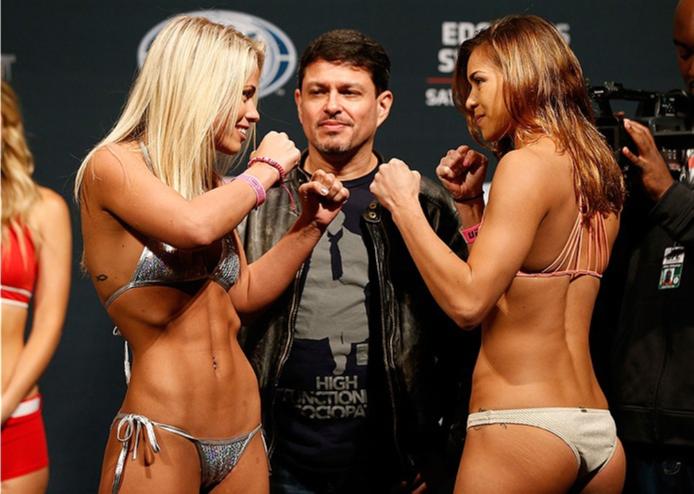 The UFC starts off their 2018 calendar year with a loaded card, on free tv!  The event will resonate from St. Louis and the crowd will be locked into every match on the main card.  All four present excellent matchups with names that will be looking to make a major impact in 2018.  Let’s get right too it!

This one was recently promoted to the main card after Uriah Hall found better things to do with his Saturday afternoon in St. Louis then show up for a weigh in.  Thus, his fight with Vitor Belfort was called off.

Michael Johnson has been streaky at best since losing to Jonathan Brookings in the finals of The UFC Ultimate Fighter back in 2010.  He has shown spots of brilliance in great wins over Tony Ferguson and Dustin Poirier.  He has also been totally outclassed and destroyed in losses to men such as Myles Jury, Nate Diaz, Khabib Nurmagomedov and Justin Gaethje.

One thing that could be said for Johnson is that he doesn’t back down from any big name.  He has several fights against top 10 challengers.  This is his first fight at featherweight however, and it will be interesting to see how he does with the cut.

Darren Elkins comes into this fight as the #10 ranked competitor in the official UFC Featherweight rankings.  He is comfortable at that weight and five straight wins at it as well.  Will he be the beneficiary of Johnson having to cut this weight for the first time?

I recently picked Usman as my breakout superstar of 2017, and he will remind everyone why tonight.  Usman is the best Nigerian Nightmare since Christian Okoye of the Kansas City Chiefs rumbled through backfields on the grid iron.  After a dominant performance tonight, the UFC really needs to start getting Usman fights on the main cards of PPV’s.

The UFC flyweight division is desperate for talent and names, and they will finally get one with Paige Vanzant.  She has met with struggles at times, but should see none in Jessica Rose Clark tonight.  Vanzant is finally at the proper weight, and still has the passion on her side, if she has the focus back, then watch out for Vanzant in 2018!

A strange choice for a main event, although this is a free card and not pay per view.  Stephens has been everything from a top contender to a journeyman throughout his UFC stay. At only 31 years old, he has competed in the UFC Octogan 27 times.  That is an incredible stat, with his first match in the promotion coming back in 2007 at UFC 71.

There is no questioning his power however as he has thunderous knockouts over the likes of Rafeal dos Anjos, Cole Miller and Nick Walker to name just a few.  At 26-14, his career has seen plenty of ups and downs and he appears comfortably settled into his role as UFC gatekeeper.

While his opponent Doo Ho Choi may not be as well-known as Stephens, he is still every bit as talented. Choi comes into this match at 14-2 (3-1 in the UFC).  His 3 UFC wins all came by first round knockout over the likes of Thiago Taveres, Sam Sicillia and Juan Pug.  This is clearly a huge step up in competition for Choi and it will be interesting to see how he will do.