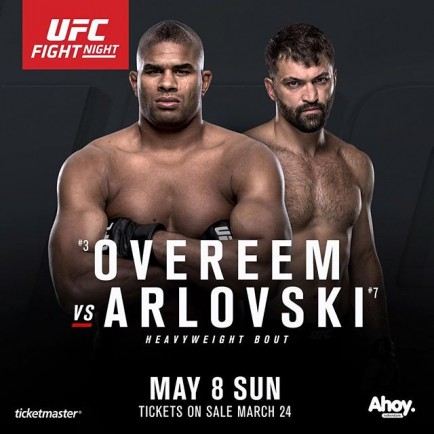 UFC Fight Night: Overeem vs. Arlovski (also known as UFC Fight Night 87) will take place later today from the Ahoy Rotterdam in Rotterdam, Netherlands and the event is the first that the organization has hosted in the Netherlands.

Both men have heavy hands and can end a fight quickly. At 25 – 11, Arlovski has proven how good he is with dominant wins over such MMA luminaries the likes of Tim Sylvia to win his first UFC Heavyweight title. He followed that up with wins against current UFC Heavyweight champion Fabricio Werdum along with top contenders Roy Nelson and Ben Rothwell.

After stints in various other promotions such as Strikeforce, WSOF, Elite XC and Affliction, he returned to the UFC in 2014 and has been on a tear ever since. He is 4-1 in his return with big time wins over former champ Frank Mir, along with Antonio Silva, Brendan Schaub and Travis Browne. He did lose his most recent fight to current number one contender Stipe Miocic in 54 seconds by knockout at UFC 195.

Alistair Overeem (40-14-1) lifetime, is a MMA veteran experiencing a career resurgence and very well may be just one more win away from a title shot. He made a name for himself in Pride Fighting, where he won several heavyweight championships, before going to Strikeforce and doing the same thing.

Expectations for him were lofty heading into his UFC debut against Brock Lesnar, especially after the quick win, but he then hit a major snag testing positive for PED’s followed by losing 3 of his next 4 fights. Since then, he has once again turned things around with dominant wins over Stefan Struve, Roy Nelson and most recently JDS. 2 of the 3, by knockout.

This matchup is a classic case of striker vs striker. I don’t see much action on the ground during this one as both men will be dishing out the heavy blows. I would be shocked to see an early knockout as well, as both men have solid chins. I do believe Overeem is starting to peak while Arlovski may be facing the down side of his career.

With that being the case, I’m taking Overeem by third round knockout.

Don’t sleep on the rest of the main card either as it has several other great matches as well.
Heavyweight Antônio Silva
vs. Stefan Struve