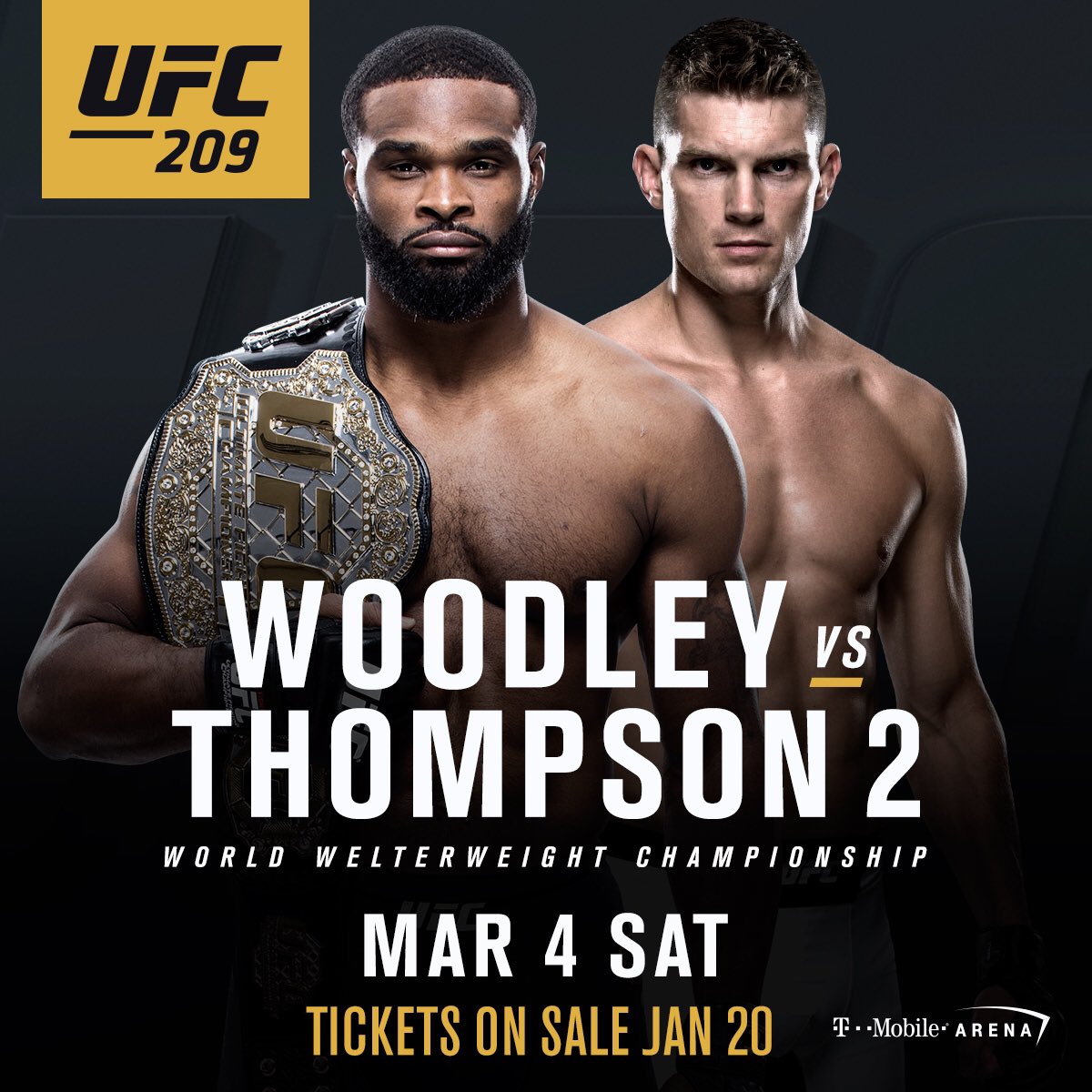 UFC 209 is Saturday Night Live from at the T-Mobile Arena in Paradise, Nevada.  The headliner features the much-anticipated rematch between Welterweight Champion Tyron Woodley vs Stephen Thompson.  This will be a rematch of their majority draw back in November at UFC 205.

As usual, for the pay per view shows, the card is stacked!  Let’s take a closer look at the full main card breakdown.

Breakdown – Both men are coming off of embarrassing losses.  Mark Hunt got absolutely pounded on and destroyed for three straight rounds in July at UFC 200, then tried suing the UFC because Brock tested positive for PED’s afterward.

Meanwhile, Overeem is coming off a brutal first round knockout at the hands of Stipe Miocic at UFC 203 in September in Cleveland.  A win for either man can be a shot at redemption, a loss, and they will more than likely never again see a UFC title shot. I see Overeem using his reach and overall length to keep Hunt at bay.

Breakdown – At 2-2 and not too far removed from the Female Ultimate Fighter, Cooper is still cutting her teeth in the world of MMA.  Her opponent Cynthia Calvillo is 3-0 with 2 KO’s but this is by far her first fight in the limelight.  I think she takes advantage of that.

Prediction – Calvillo by second round submission

Breakdown – After multiple attempts to debut at Middleweight, Evans finally gets his first match.  One must not forget, not only did Evans compete and win at Heavyweight on Season Two of the Ultimate Fighter, he also started his career 13-01 at Light Heavyweight, and won the World Championship in the process.  He has struggled as of late, however, losing 4 of his last 6 fights before making the move to Middleweight.

Australian-born Kelly has fought only 1 of his 13 career fights on American soil, the rest coming on his home turf.  That is not something to overlook as the continent change may throw him off.  He is 12-1 and on the cusp of reaching the next level in his UFC career.  Will rust because of the long layoff hamper Evans enough to allow Kelly to score the biggest win of his career?

Prediction – Kelly wins by Majority decision as Evans tires out and Kelly rallies to win rounds 2 and 3 after a lopsided first round for Evans.

Breakdown – If you don’t know who Lando Vannata is yet, you will after what will be a dominant first round finish on Saturday.  The kid is for real, and his run towards the big time is about to begin.

Prediction – Vannata by first round KO

Thompson is a five-time kickboxing world champion with lethal strikes and a warrior’s heart.  He can beat you in a number of ways.  He seemed tentative last time, and that is what led 2 of the 3 judges at UFC 205 to call it a draw, and the third to score it to Woodley.  He won’t be that tentative this time around, and come out guns a blazing.

Woodley has that one punch knockout power that makes him deadly as he can and will end a fight at any time.  I see this one being a barn burner once again, as both men are very good at their craft.

Prediction – Woodley by split decision.  It will be so razor thin, that the first judge’s card read will give it 48-47 to Thompson, with the other two being read in the favor of 48-47 Woodley.