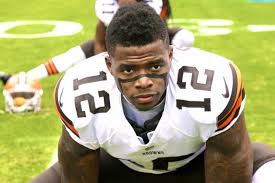 When news broke that Josh Gordon would be reinstated by the NFL, the internet responded appropriately.

Josh Gordon's reinstatement comes in a year in which The Browns drafted 5 WRs in 7 rounds.. most in the common draft era

Josh Gordon and Tom Brady will both be eligible to return in Week 5.

REPORT: Josh Gordon has been reinstated and promises to stay off weed for at least 24 hours, maybe even 48 if he really tries hard

Crazy movie pitch: Someone goes and gets Josh Gordon out of Johnny Manziel's house and to the airport so he can hang with Chad Johnson.

You smoke a bowl on break at McDonald's, they're locking you out. Josh Gordon is getting every chance possible to be a legend.

Josh Gordon is back! pic.twitter.com/MB3smziXxn