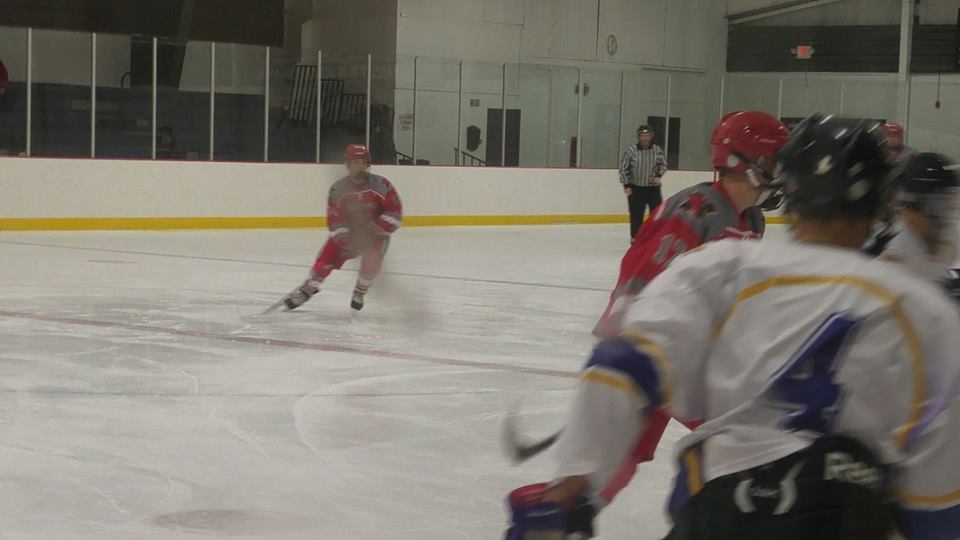 It was never close as Mentor dominated from start to finish in a 9-1 trouncing of the Avon Eagles.  The lone bright spot for Avon, despite the score, was the play of goal tender Danny Fielding who once again made 38 saves to keep the Eagles from being mercy ruled.  In this tournament, once you get down by 10 they stop the game.

To the credit of Avon, they appeared to have tired legs from also playing in the tournament at Normandy this weekend as well.  They hung in there the best they could, but Mentor is simply too fast, to strong and just plain too good!

In the first period alone, Danny Fielding saved 16 of 19 shots.  The barrage of the Mentor attack was just incredible and couldn’t be stopped.  The three Cardinal goals came from Jack Heller, Alec Weaver and Kyle Backston. Avon could only muster up 3 shots of their own, all saved by Mentor goal tender Cameron Adamic.

The second period was more of the same, however Avon did manage to score first and cut the lead down to 3-1.  Caleb Ferchen took the nice set up from Tyler Zajankala to get the Eagles on the board.  Mentor wasted no time answering with a frenzy of their own goals.  The most notable was the McBride brother combination as Evan put one in after a great pass from brother Andrew.  The Cardinals would lead 7-1 by the end of two periods.  Mentor would tack two more on the final period for the 9-1 victory.

The players of the game were Kyle Backston with The Hat Trick as well as Alec Weaver who chipped in with 2 assists and a goal.

Mentor Goal by Jack Heller. Unassisted at 10:50 of the First Period.

Mentor Goal by Alec Weaver. Assist by Evan McBride at 9:18 of the First Period.

Mentor Goal by Kyle Backston. Assist by Zach Burke at 2:15 of the First Period.

Avon Goal by Caleb Ferchen. Assist from Tyler Zajankala at 13:49 of the Second Period.

Mentor Goal by Evan McBride from Andrew McBride at 11:58 of the Second Period.

Mentor Goal by Kyle Backston from Alec Weaver at 9:31 of the Second Period.

Mentor Goal by Kyle Backston. Unassisted at 7:41of the Second period.

Mentor Goal by CJ Will.  Assist from Kyle Backston at 2:46 of the second period.

Mentor Goal by CJ Will.  Assist by Alec Weaver at 6:31 of the third period.

Mentor Goal by Andrew McBride. Unassisted at 0:23 of the third period.

Avon at 7:30 of the first period. Failed to convert.

Mentor at 10:03 of the second period. Converted.