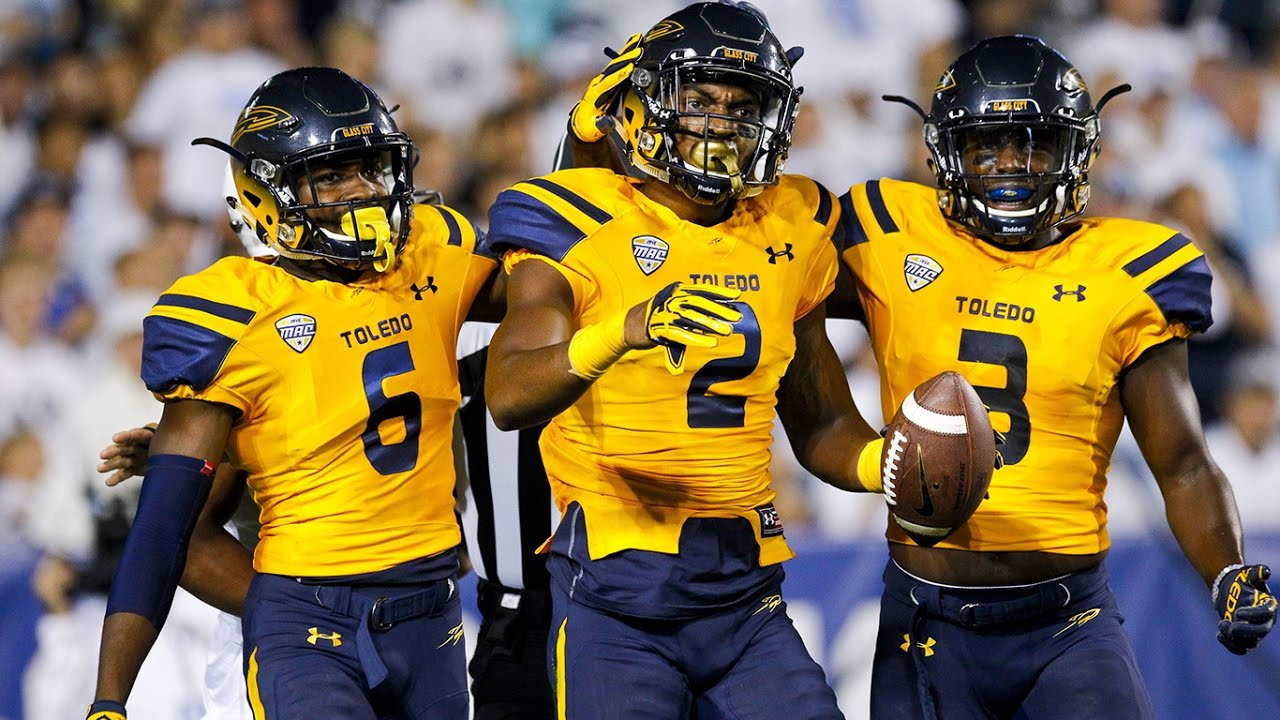 • Week 11 features the continuation of midweek MACtion with three midweek games and two Saturday contests. Week 11 begins with one game on Tuesday, Nov. 6 at 7:30 pm with Kent State at Buffalo (ESPNU), and two games on Wednesday, Nov. 7 with Ohio at Miami in the ‘Battle of the Bricks’ at 7:00 pm ET (ESPNU) and Toledo at Northern Illinois at 8:00 pm ET/7:00 pm CT (ESPN2). Saturday, Nov. 10 will witness Akron at Eastern Michigan at Noon ET (ESPN3) and Bowling Green at Central Michigan at 3:00 pm ET (ESPN+).

Midweek MACtion continues this week with games on Tuesday and Wednesday with three games during the week and two games on traditional Saturday afternoon. The week begins on Tuesday, Nov. 6 at 7:30 pm ET with Kent State at Buffalo (ESPN2), while Wednesday, Nov. 7 will feature Ohio at Miami at 7:00 pm ET (ESPNU) and Toledo at Northern Illinois at 8:00 pm ET/7:00 pm CT (ESPN2).The MAC began midweek football in 1999 and this season marks the 20th year of playing during the week. During the 2018 season, the MAC will have 16 games nationally televised on either ESPN2, ESPNU or CBS Sports Network on Tuesday, Wednesday or Thursday during the last five weeks of the regular season.

• Northern Illinois (6-3, 5-0) won its fifth consecutive game with a 36-26 win at Akron on Thursday, Nov. 1 as the Huskies remain in first place in the MAC West Division and became bowl eligible for the 10th time in the last 11 years. NIU quarterback Marcus Childers was 21-28 passing for 188 yards and running back Tre Harbison had a career-high 169 yards rushing and one touchdown. The Huskies defense totaled five sacks, eight tackles for loss, two interceptions and limited Akron to 35 yards rushing.

• Ohio (6-3, 4-1) posted a convincing 59-14 win at Western Michigan on Nov. 1 as the Bobcats scored 45 points in the first half alone and totaled six turnovers to become bowl eligible for the 10th consecutive year. The win marked Ohio’s first win over Western Michigan since Oct. 7, 2006. The Bobcats totaled 420 yards of total offense as quarterback Nathan Rourke accounted for five touchdowns, three passing and two rushing. Rourke has 64 total touchdowns in his career, which ranks third-most in school history, with 34 career passing touchdowns, 29 career rushing touchdowns and one receiving touchdown.

• Toledo (5-4, 3-2) posted a 45-13 win over Ball State on Oct. 31 as the Rockets scored a touchdown on their first three drives and posted 531 yards of offense and forced five turnovers. Toledo quarterback Eli Peters was 25-34 passing for 327 yards and two touchdowns.

• Eastern Michigan’s defense was dominant in a 17-7 win over Central Michigan as the Eagles totaled four sacks, eight tackles for loss, two forced fumbles and two interceptions in holding Central Michigan to only 138 yards of total offense. The Eagles were led by running back Shaq Vann with 13 carries for 114 yards.

• Kent State earned a 35-28 win at Bowling Green on Oct. 30 as running back Jo-El Shaw rushed for 128 yards and two rushing touchdowns, and added 28 yards receiving and one touchdown.

OHIO AT MIAMI AND THE’ BATTLE OF THE BRICKS’ ON NOV. 7

The Ohio Bobcats and Miami RedHawks rivalry dates back to 1908 and the Bobcats and RedHawks will meet for the 95th time on Wednesday, Nov. 7 in Oxford, Ohio at 7:00 pm ET on ESPNU. The Ohio-Miami rivalry is known as the ‘Battle of the Bricks’ as Miami leads the series 52-40-2. However, Ohio has won the last five straight meetings and 11 of the last 12 meetings, including a 45-28 win vs. Miami last season.

“What a great opportunity to play at South Carolina against the Gamecocks,” said Akron seventh-year head coach Terry Bowden. “Our young men were so disappointed when the Nebraska game was cancelled due to lightning. We felt it was important to give them a game in such a great venue.”

“This gives us the best opportunity to earn a bowl bid,” Akron Director of Athletics Larry Williams said. “It will be a first-class trip that gives us the chance to match up against a quality opponent that evaded us in the opening weekend. Our student-athletes look forward to the opportunity.”

OHSAA Announces 2018 Volleyball State Tournament Pairings
Cavaliers look to rebound from their worst loss of the season, Monday at Orlando