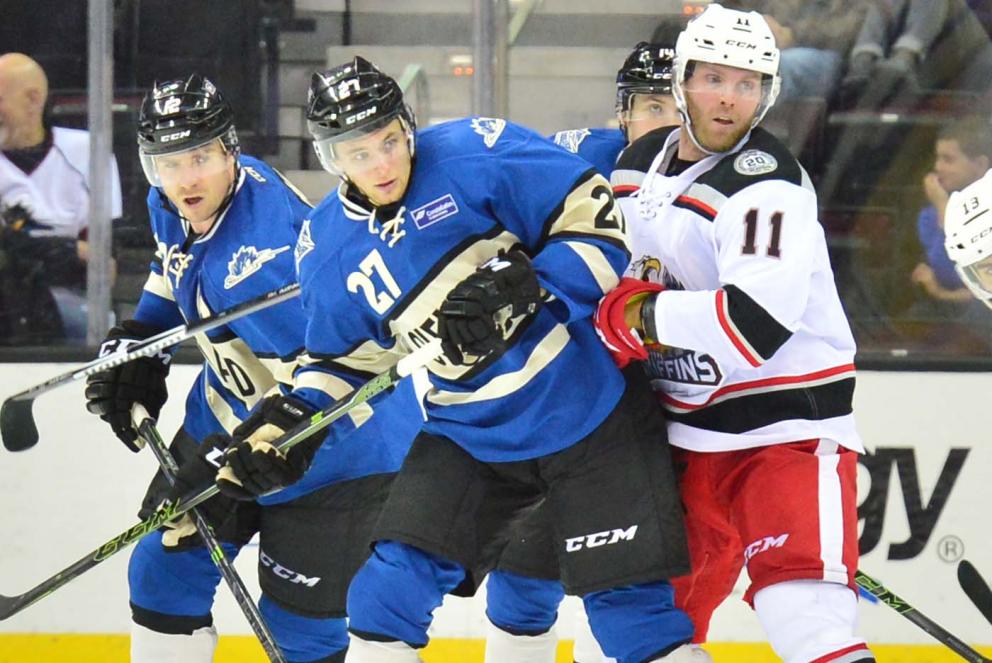 CLEVELAND – With their opponents on the verge of a franchise-record winning streak, Cleveland’s Lake Erie Monsters battled with purpose, but ultimately fell to the Grand Rapids Griffins on Wednesday at The Q by a final score of 3-2.

With the loss, the Monsters record dropped to 15-7-1-2 overall this season and with a .660 points percentage, Lake Erie currently occupies third place alone in the AHL’s Central Division standings.

The Griffins grabbed a 1-0 lead on Wednesday when Robbie Russo scalded home his second score of the season on the power-play on feeds from Martin Frk and Xavier Ouellet at 9:17 of the opening frame.

In the second, Anthony Mantha pushed the Griffins lead to 2-0 at 1:27 of the frame before the Monsters drew within a goal at 10:49 when Kerby Rychel found Josh Anderson in front of the net and the Lake Erie winger powered home his sixth of the year to make it 2-1.

The Griffins turned to Mantha again at even-strength at 15:42 of the middle period to nudge Grand Rapids’ advantage back to a pair of goals at 3-1.

In the final stanza, Monsters right wing Oliver Bjorkstrand tallied his second goal in as many games at 2:45, thanks to an alert setup by T.J. Tynan and Dillon Heatherington, but despite a late Lake Erie flurry, the Griffins held on down the stretch for their 12th consecutive win, the longest such streak in the AHL this season and the longest winning streak in Griffins history.

Monsters goaltender Anton Forsberg fell to 10-3-1 in net this season despite a 25-save performance while Griffins backstop Jared Coreau improved to 10-2-1 thanks to 47 Wednesday stops.

Next up for the Monsters, it’s a Saturday road tilt vs. the Charlotte Checkers with full coverage from Bojangles Coliseum in Charlotte, NC underway at 7:00 pm.