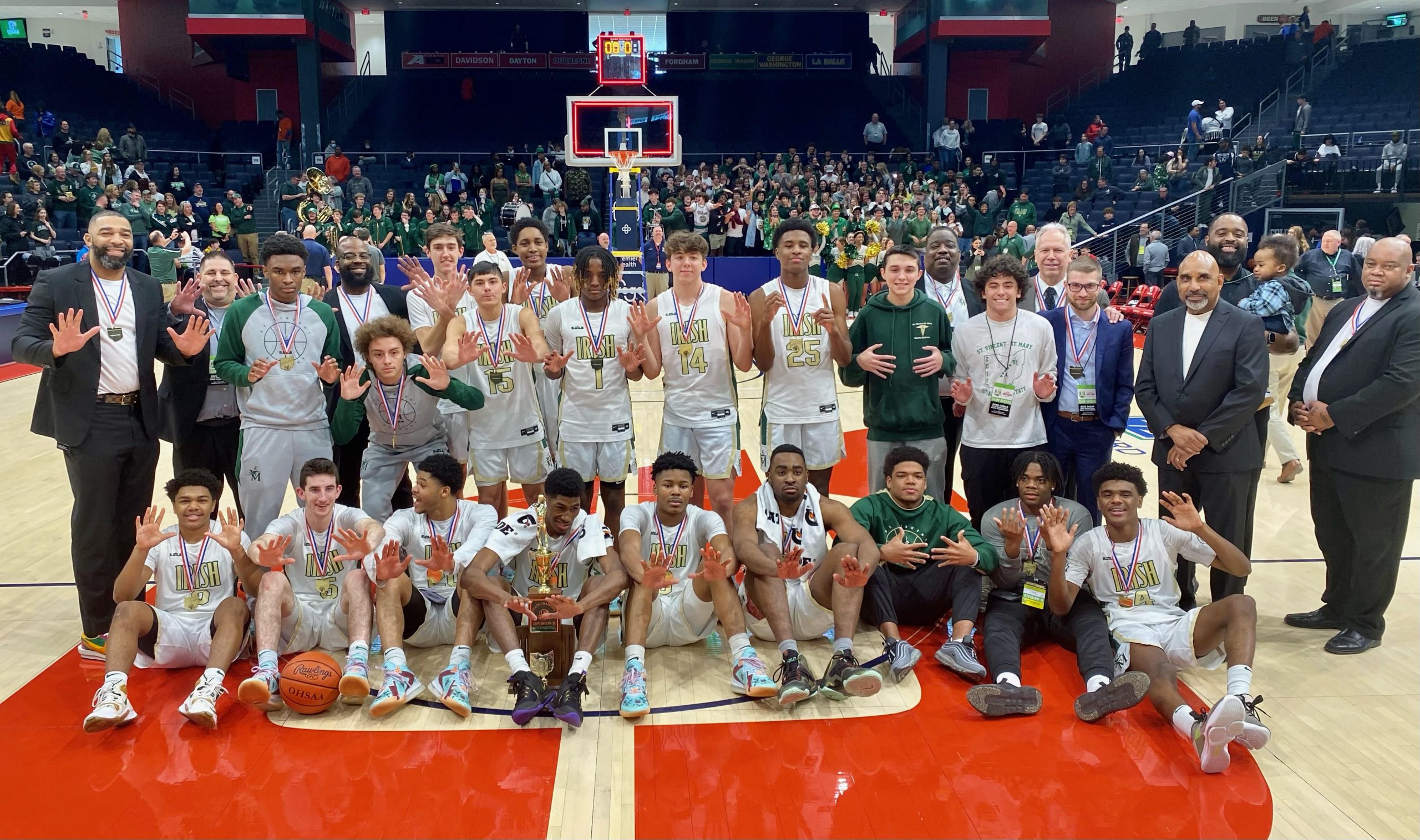 Well, you can finish the rest.

STVM pieced together another dominant outing, defeating Gilmour Academy 63-35 for their tenth state title in school history, and the seventh of the remarkable Dru Joyce era.

This game started similarly to the Irish’s previous win against Alter. They trailed early on, with a couple of finesse scores from Adisa Molton and Dorjan Flowers giving Gilmour a 7-6 lead late in the first.

But once Sencire Harris and company got rolling, there was no stopping the red-hot Irish.

A quick 6-0 run gave them a 12-7 lead to end the first quarter with momentum in their favor.

This is a championship-caliber sequence by STVM!

Sencire Harris gets the block on one end, then a couple of clean passes set up a Darius Stratford and-1.#OHSAAChampionships 🏀 pic.twitter.com/KAUqo2wO3v

STVM would then extend that run to 16-5 before Sencire Harris was removed due to foul trouble, allowing Gilmour to put a small dent in their deficit heading into the break.

Sencire Harris was taken out towards the end of the second with foul trouble, allowing Gilmour to go on a little 5-0 spurt.

Here is the mid-range jumper from Nathan Nootbaar, assisted by Dorjan Flowers.

Despite having taken 11 fewer shot attempts and being outrebounded 17-9, Gilmour was hanging a little too close for comfort, only trailing 24-17.

That’s when STVM’s talent and experience would take control, as they went on to explode for 18 points in the third quarter while holding Gilmour to just five.

STVM wins the quarter 18-5 to take a commanding lead heading into the fourth!

With momentum on their side and the game becoming out of reach, Gilmour sputtered down the stretch, giving STVM a convincing 63-35 championship victory.

The 2022 postseason run for St. Vincent-St. Mary was as dominant as the state has ever seen, as they went on to beat their opponents by an average of 35.5 points per game.

A big part of their success is their balanced offensive attack, as well as their size and smothering defense.

Harris led the way with 17 points and seven assists, while Lance Hayes and Ramar Pryor finished with 11 and 10 points, respectively.

Hayes also contributed four of the eight team steals on the day.

Gilmour Academy finishes their season just short of their first state title in school history, but there’s still plenty to look forward to for the 2022-2023 campaign.

Underclassmen Adisa Molton and Dorjan Flowers were among the biggest difference makers during this deep Gilmour run. However, it was senior Ryan Mueller who led the Lancers with nine points.

For STVM head coach Dru Joyce, March 20th, 2022 will go down as his seventh state title since he took over the program in 2001. He has seen plenty of talent come-and-go, but one thing is for certain; This year’s team was one of the most special he has had the opportunity to coach in his storied career

Dru Joyce wins his seventh state title at the helm of the St. Vincent-St. Mary program.