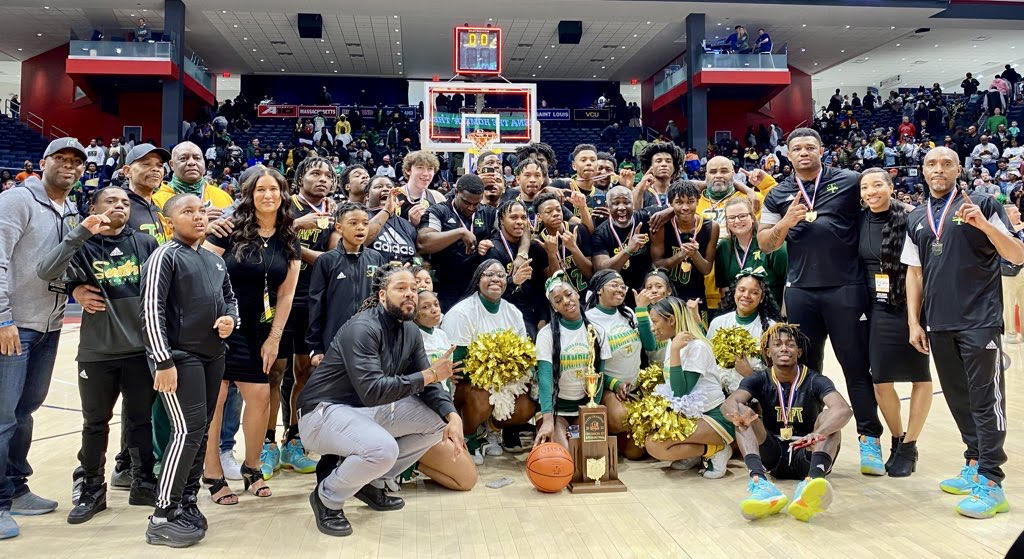 DAYTON, Ohio – Some didn’t know what to make of Taft after a shaky end to their regular season.

Everybody knows what to make of them after Sunday.

The Senators, who entered the postseason with a record of 11-8, finished an incredible playoff run as state champions, defeating Ottawa-Glandorf 48-45 in a thrilling season finale.

After a back-and-forth opening quarter saw Taft work their way to a 10-8 advantage, Ottawa-Glandorf came alive to start the second.

The Titans went on a quick 9-0 scoring run to take a 17-10 advantage, a run that included an and-1 by Eli Schmenk and a slam dunk in traffic by Colin White.

Ottawa-Glandorf opens the second quarter on a 9-0 run to take a 17-10 lead over Taft.

Here’s an and-1 take by senior Eli Schmenk, his first bucket of the game.#OHSAAChampionships 🏀 pic.twitter.com/3Apkwb9pZy

This would be the largest lead of the game for Ottawa-Glandorf, as Taft capped off a quarter-ending 17-6 run with a last-second three by Mekhi Elmore to head into the break with a 27-23 lead.

Mekhi Elmore knocks down a filthy jumper to beat the buzzer, capping off a 17-6 Taft run to end the half!

Colin White Ottawa-Glandorf would fight back from their deficit, going on to tie the game at 38-38 with one quarter to play.

White was the driving force in this game for the Titans, finishing with 18 points on the day.

Colin White is up to a team high 10 points for Ottawa-Glandorf, propelling them to a 32-31 edge in the third.#OHSAAChampionships 🏀 pic.twitter.com/GyzuM3vyk8

With eight minutes left to decide a champion, Taft looked poised to win a low scoring fourth quarter and the title, going on an 8-2 run to take a 46-40 advantage with just 2:45 to play.

Eian Elmer blows the roof off of UD Arena with a breakaway slam!

Taft extends their lead to 46-40 with 2:45 to play in regulation.#OHSAAChampionships 🏀 pic.twitter.com/dLfoxQx5at

However Colin White wasn’t going to let his sophomore season go without a fight.

White made an improbable driving shot with 51.4 to play, making the Ottawa-Glandorf deficit 48-45 with under a minute to play.

Colin White cuts the Taft lead to 48-45, prompting a Senators timeout with 51.4 to play in regulation.#OHSAAChampionships 🏀 pic.twitter.com/2udZgTZI5V

That deficit remained until the final few seconds, when a missed free throw in a one-and-one situation gave the Titans one more chance to score and send the game into overtime.

It was fairly obvious who would get the last look to save the season, as White had two looks for three that didn’t drop.

This is the third title in school history for Taft, and their first since 2011.#OHSAAChampionships 🏀 pic.twitter.com/U3LxBwF8wP

With the final miss, Taft players and coaches stormed the court to celebrate a 48-45 Division III Championship victory, marking their third title in school history and their first since 2011.

While Ohio State target Rayvon Griffith takes a lot of the spotlight, it was senior Mekhi Elmore who stole the show on the biggest stage.

In his final high school game, Elmore led Taft with 18 points to go with four assists and three steals. Griffith was the only other Senator to finish with double-digit points, going for 12 on 5-for-9 shooting.

Colin White and Ottawa-Glandorf have a very bright future ahead, but it is Taft’s night to celebrate, as they bring a state title back down I-75 to Cincinnati.