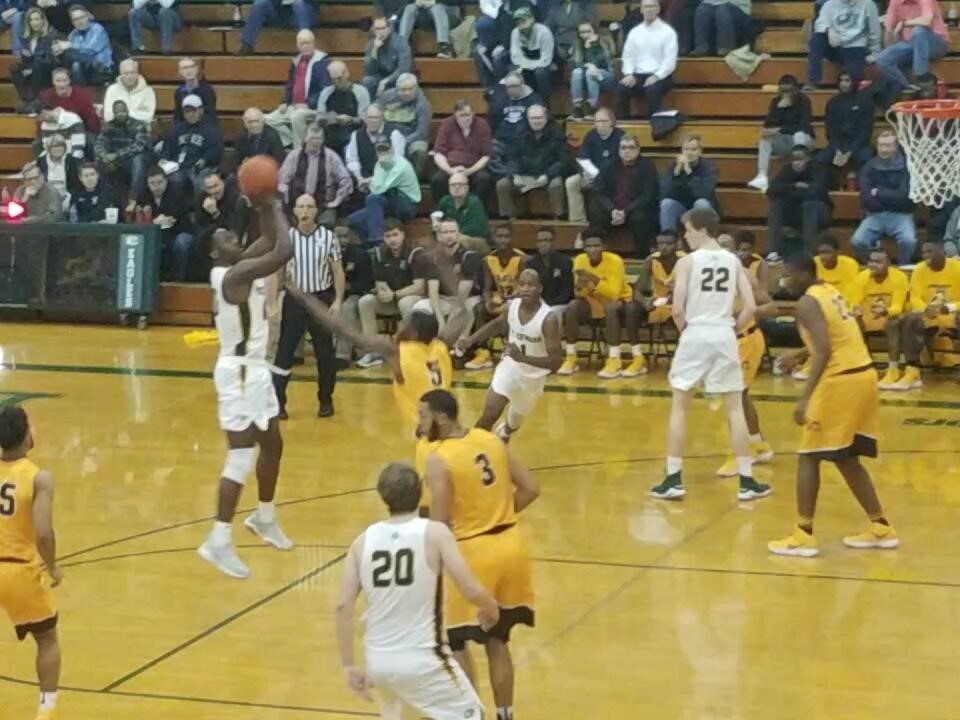 LAKEWOOD, OHIO – Basketball is a funny game sometimes. You can look at a box score the next day and see all the stats and think a game was pretty one sided. Now while this is usually the case in most games, Tuesday nights contest between the St. Edward Eagles and Brush Arcs was not one of those games.

The Eagles won 93-77 but this game was truly much closer than the final would indicate. Both teams came into the game being ranked in the Cleveland.com Top 25, the Eagles being ranked #2 while the Arcs were #12, so the anticipation was high even before the ball was tipped.

St. Eds has been down to Columbus three of the last four seasons, and seems primed to compete for another trip to the final four. While there are a number of teams in NE Ohio trying to prevent another dominant run by the Eagles, Brush is trying to prove they belong in that conversation.

Tuesday night served as a good measuring stick as to where they are and where they hope be, when the calendar flips to February. Unfortunately the Arcs still have a long way to go. The Arcs have all sorts of talent starting with their three division 1 prospects (Dj Dial, Andre Harris, and John Hugley,) to pair with the rest of the Arcs talent filled roster.

In a matchup where the other teams talent is equal or even slightly greater, teams have to find other ways to win. When you look at the point differential each quarter, it shows that Eds was able to extended on their lead even if it was slightly. This is the biggest difference between a good and a great team, the ability to pull away from your opponent without them even realize what hit them.

The Eagles only held a two point lead after the first quarter, but quickly took control of the game when they scored seven quick points to start the quarter, ultimately forcing the Arcs to burn a timeout.

At this point in the game, the difference in the two programs was apparent. The difference wasn’t talent, it was simply experience. Sure the Arcs are an older team, with a lot of different guys who have played in coach Chet Mason’s system before, but the experience of playing in a big game seemed to be missing. While the Eagles have the experience of these types of games before, the Arcs struggled to whether the storm.

Basketball is often a game of runs, that just the beauty of the game. The difficult part is 1) having your run be longer than your opponents or 2) getting timely defensive stops. Brush wasn’t able to successfully accomplish either of these. There was a point midway through the third quarter where Brush cut the St. Eds lead down to 11, only to have Eagle senior P.J Flannery hit a huge three pointer.

Now with the lead being 14. The Arcs were still in striking distance, until the lead became 16, then I blinked and it was extended to 18 points.

Everytime the Arcs had the opportunity to close in on the Eagles, the Eagles would make a big play.All the credit in the world goes to the St. Eds Eagles on their ability to whether the storm, but one has to wonder if these runs would’ve happened had the game been played elsewhere.

At one point in the 3rd quarter the Eagles had a 6-1 foul differential, and in a game where a few stops changes the complexion of the game those questionable calls aided the Eagles runs.

Now did the Eagles deserve to win Tuesday night? Absolutely. Just have to wonder what the Arcs do with a few more possessions, because at points during the game it looked two different games were being played.

Brush Senior guard Tajh Benton led the way with 20 points, including 6 three pointers. Benton was a huge part of the Arcs second half success as he nine of their first 11 points. After every Benton three, the Eagles would make a big play. Usually the man behind those big plays was Sophomore Devontae Blanton, who finished with 20 points of his own to lead the Eagles.

Blanton was always a force on the defensive end as the combination of himself and senior Emmett Chamber held Hugley to just 8 points. While those two did most of the heavy lifting with Hugley, the Eagle guards should give themselves a pat on the back as they seemed to come down just at the right time for the double team.

There are a number of big men in college who struggle when the double team comes, so it is no surprise the Eagles had success doubling down low. When you have the combination of size, quickness and discipline success usually isn’t too far behind, which is one of the many reasons the Eagles are now 6-0.

Video: Tim Alcorn of WEOL and Shaun Bennett of the Chronicle-Telegram On the Latest in High School Wrestling
GBB: Berea-Midpark dominates Amherst thanks to sharp-shooting