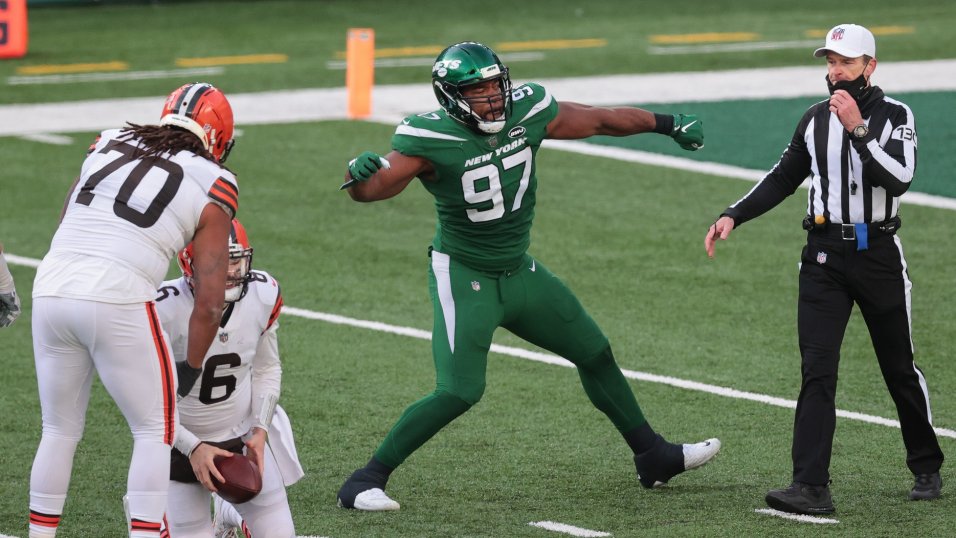 The Cleveland Browns came back to MetLife Stadium Sunday, this time to take on the New York Jets. Before leaving for the game, the Browns got news of linebacker B.J. Goodson tested positive for Covid-19, and after conducting contact tracing receivers Jarvis Landry, Rashard Higgins, and Donovan Peoples-Jones would also have to remain home for the game.

While being short at the receiver position, the Browns would also be down two starting offensive lineman in Jedrick Wills Jr. and Wyatt Teller. The multiple missing pieces were evident for most of the game, as the Browns offense struggled to consistently manufacture production as they fell short to the Jets 23-16.

The Browns opened the game on offense after an impressive 31 yard return by D’Ernest Johnson on the opening kickoff. Baker Mayfield found Austin Hooper short up the middle on first down for five yards, but failed to produce much further with two straight incompletions to bring out the punting unit.

On the other side, Jets quarterback Sam Darnold opened his first drive with two incompletions on first and second down to bring up a quick down and distance. On the third down play, Darnold would scramble left out of the pocket to find six yards before Sione TakiTaki pushed him out of bounds at the 32 yard line to force a three and out.

On the ensuing drive, the Browns were able to move the ball into Jets territory, with Mayfield finding Hooper on the second play of the drive for 28 yards down to the Jets 33. Moving the chains three plays later on another connection to Hooper down to the 21. However, the Browns offense would only go backwards after being stuffed for no gain on first down by Nick Chubb, and two straight incompletions bookended a false start penalty on Mayfield. Nevertheless, the Browns would get on the board with a 44 yard Cody Parkey field goal to go up 3-0.

The Jets found themselves immediately facing a long third down on their next possession, however Darnold would find Daniel Browns for 13 yards and a first to keep things alive before finding Braxton Berrios for 17 near midfield. A six yard run on second down by Frank Gore brought up third and four two plays later, as Myles Garrett chased down Darnold on the play for a nine yard sack to force a punt.

The Browns offense once again were stifled by the stingy Jets defense after the punt, only manufacturing a total of seven yards before punting after a three and out.

The Browns defense, who had done well the first couple possessions against Darnold, fell apart in five plays to give up the lead. Two nine yard receptions by Jamison Crowder set up a second and one at the Cleveland 45. After La’Mical Perine moved the chains on a two yard run, Darnold would find Berrios for a 43-yard touchdown to take the lead on a blown coverage by the Browns defense.

The Browns took over with 34 second to go in the first quarter, ending the quarter on a 13 yard first down pass to Harrison Bryant. On the first play of the second quarter, Mayfield would be sacked by Tarell Basham, fumbling the ball back to the Jets offense after a recovery by Jets’ Folorunso Fatukasi.

Darnol found Christopher Herndon on third and five from the 11 yard line for the score, however Sheldon Richardson would block the extra point to keep the deficit at 13-3.

The Browns offense would put together a healthy dose of both run and pass to find themselves facing a first down from the Jets 46 yard line after five plays on the next drive. Getting some more help from a roughing the passer penalty on first down, the Browns offense found themselves deep in Jets territory. Unfortunately, the offense only went backwards from there, a two yard loss by Kareem Hunt on the first down run, followed by a nine yard sack of Mayfield and the Browns were forced into a punt after a third down incompletion.

Both teams combined for three first downs with the next three possessions, with the Browns offense only actually producing two yards of offense before their final possession of the first half.

With less than a minute to go in the half, the Browns offense turned to an effective no huddle offense to set up a long field goal at the end of the half. Mayfield found three different receivers in Hunt, Bryant, and Hooper to set up a 61 yard field goal. Kevin Stefanski opted for punter Jamie Gillan to take the kick, who left it way short as the Browns went into the half down 13-3.

The Jets opened the second half with the ball looking to extend their lead. Mixing up the run and pass to move the chains twice, before Darnold found Crowder for 25 yards down to the Cleveland 34. The Darnold to Crowder connection opened the half on fire, outdoing the 25 yard play, a few plays later with a 30 yard touchdown to take a 20-3 lead.

After the score, the Browns offense would take over needing something desperately. Unfortunately rookie guard Nick Harris would get called for clipping on the first play of the possession to push the Browns back deep in their own territory. Being backed up, Mayfield would move the ball 16 yards on two passes to bring up third and 5, but would miss Hooper on the play to force a punt.

The Jets took over with great field position, and found themselves in Cleveland territory immediately after a 14 yard first down pass to Perine. The Browns looked to have gotten out of trouble by forcing a punt three plays later, before a roughing the kicker penalty gave the Jets offense new life and a first down. The Jets would be forced to settle for a field goal attempt after only gaining three yards with its new set of down. Sheldon Richardson would block another kick on the attempt to keep the deficit at 17 points.

The Browns offense took advantage of the good field position after the block to find the endzone on the drive. On second down, Mayfield would find Chubb down to the Jets 38, before finding Jamarcus Bradley two plays later for 22 yards into the redzone. After a nine yard connection to Hunt brought up third and one, Mayfield would find four yards himself for a first and goal. A too many men on the field penalty on the Jets moved the ball to the one yard line on second down, before Chubb found the endzone to bring the score to 20-10 in the favor of the Jets.

After the score, the Browns defense stiffened up once again to force another three and out to give the ball back to their offense who found something with their last possession.

The Browns would take over with just over a minute to go in the third quarter, and kept their momentum going into the fourth quarter. After the quarter break, Chubb would find 16 on the ground down to the Jets 26. Three plays later a defensive pass interference penalty kept the halted Browns drive alive after two straight incompletions. Grinding out another first down on the ground to bring up first and goal from the four, before Hunt found a seam left for a 4 yard touchdown. Parkey would hit the upright on the extra point attempt as the score stayed at 20-16.

Looking to preserve their diminishing lead, the Jets offense put together two first downs near midfield, before being forced into a punt by the Browns defense.

The Browns offense got some help to open their next possession on a second down roughing the passer called on Fatukasi. To no avail, as an illegal block in the back from Bradley two plays later would completely halt the drive, as the Browns punted two plays later.

The Jets coaching staff seemingly turned to Darnold to finish the game, aside from opting to bleed the clock out with the run. Darnold would deliver a big first down on a third and nine play with an 11 yard connection to Herndon at their own 47. Two straight incompletions a couple plays later however would force a punt.

After the punt, the Browns took over and backed up at their own 11 yard line. After a four yard pass to David Njoku brought up a third and six , Mayfield would need to find something on third down to keep hope alive. On the third down play, Basham would sack Mayfield, once again forcing a fumble to give the ball back to the offense deep in Cleveland territory.

The Jets had a chance to close the game with a touchdown after taking over at the Cleveland 11 yard line following the fumble. However, the Browns defense would step up to force a field goal as the Jets took a 23-16 lead with just under three minutes to go in the game.

Desperate for a touchdown to tie the game, Mayfield opened the drive with a 24 yard connection to Hunt to their own 40 yard line. Following that up with an eight yard pass to Hooper, before an incompletion brought up third and two and the two minute warning. After the break, Hunt would follow the left tackle for a three yard first down run. Momentum seemingly stalled after that with two straight incompletions before Mayfield found Hooper for nine to bring up a fourth and one.

With the game in the balance on fourth down, Stefanski opted for a quarterback sneak to put the ball in the hands of his franchise quarterback. Mayfields fumbling issues in the game continued on the play however, as he fumbled before the line to gain. With the game having under two minutes left only the fumbling ball carrier can advance the recovered fumble for a first down.

After the fumble and two minute advancement rule forced a turnover on downs, three straight kneel downs from Darnold ended the game, as the Browns fell to the Jets 23-16 and to 10-5 on the season.

Browns May Be Minus WR’s and TE’s Sunday Against Jets
Where Do the Browns Stand Playoff Percentage Wise After Sunday’s Upset Loss?