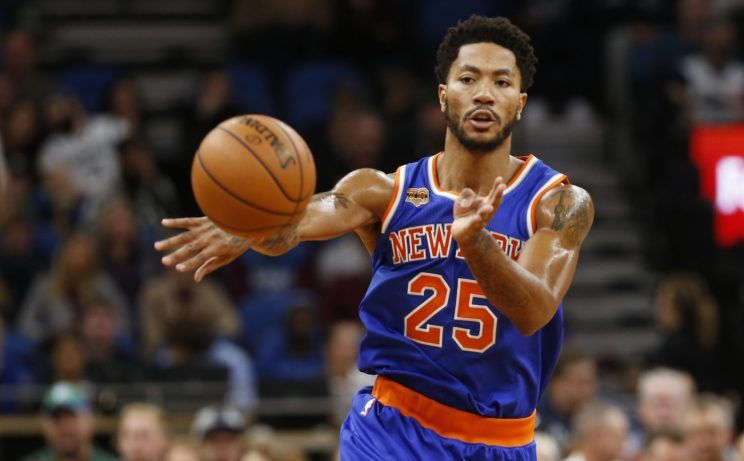 Derrick Rose is in “serious talks” to sign a one-year deal with the Cavaliers, per a new report from ESPN’s Brian Windhorst and Adrian Wojnarowski.

Derrick Rose is in serious talks with the Cavs on a 1-year deal, sources tell @wojespn and me.

Per the report, Rose has also met with the Los Angeles Clippers and Milwaukee Bucks.

The former league MVP spent the 2016-17 season with the New York Knicks, where he averaged 18 points, 4.4 assists and 3.8 rebounds in 64 games. For his career, Rose is averaging 19.5 points and six assists per game.

The deal would make Rose the back-up point guard behind Kyrie Irving. Per ESPN’s report, the Cavs would offer Rose a minimum contract of $2.1 million.

Cleveland has $2.5M of the tax ML remaining and the minimum exception available. The minimum for Rose is $2.1M ($1.5M cap hit). https://t.co/QY9v0nnhzE

So would the acquisition of Rose improve the Cavs’ chances to return to their fourth straight NBA Finals?

“The Cavs are going to be favored to do that whether they close this deal with Derrick Rose or not,” Windhorst said this morning on WKNR’s “The Really Big Show.”

Perhaps more importantly, the question on everyone’s minds will be whether the acquisition of Rose would be enough to keep LeBron James in Cleveland beyond the 2017-18 season.

“LeBron really wants to be successful in Cleveland, that’s why he came back, that’s why he raised the banner,” Windhorst said. “Whether the Cavs are doing enough, we’ll see.”