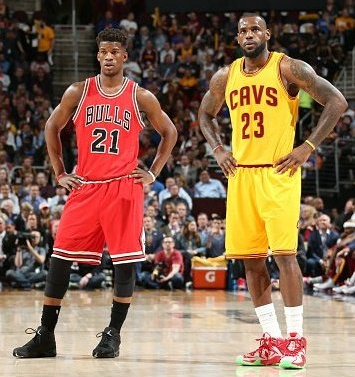 According to a report from ESPN’s Marc Stein, the Cavaliers are exploring “multiple-team trade scenarios” that would send Jimmy Butler from Chicago to Cleveland.

The Cavaliers, per league sources, have been working today on assembling multi-team trade scenarios to try to acquire Chicago's Jimmy Butler

Butler averaged 23.9 points, 6.2 rebounds, and 5.5 assists per game in the best season of his career.

Stein noted in his report that these talks with the Chicago Bulls have been in addition to the Cavs’ talks with the Pacers about the possibility of acquiring Paul George.

The Cavs would most likely offer up Kevin Love in order for a third team to get involved in the trade, in the hopes of getting Chicago to bite with draft picks or younger players.

There have also been numerous reports that the Boston Celtics are trying to acquire Butler to challenge the Cavs in the East, and could feasibly do so with their No. 3 overall pick in this year’s draft.

Stein also reported that amid all of this trade talk, no real progress has been made in re-signing general manager David Griffin. Stein said Griffin has been active in working up scenarios for both Griffin and Butler.