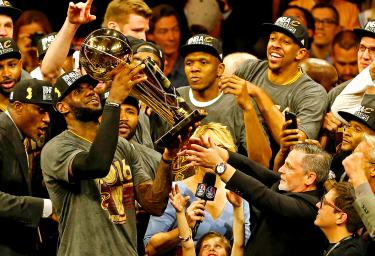 A year ago today, the Cleveland Cavaliers ended the 52-year championship drought. In honor of that historic moment, we asked fans on Twitter where they were when the final buzzer sounded.

Check out some of the responses below:

At home pinching myself to make sure I wasn't dreaming, then making phone calls to family and friends to celebrate! https://t.co/Z5rxua4dV8

Thanking the good Lord that Jose Mesa was NOT in the game!!!

MWR tent at Ali AL Saleem Air Base in Kuwait. With @Steve_Mazan, @SamFedele & half a dozen soldiers. Cried unashamedly. https://t.co/BwSAqsITNy

In the streets of Rocky River hugging and high 5ing all of my neighbors. Can't wait to do it again!

in a parking garage across from the Q watching the game on a flat screen from this guys truck with my best friend @Madison_Miluk https://t.co/gSelnBcdiH

In Quicken Loans Arena with my family https://t.co/ZPeNsiZ69K

In Italy with 12 guys in a hotel room watching it on one iPhone 6 at 4 A.M in the morning while eating Italian McDonalds

There in the middle with my fam, hugging strangers and occasionally getting splashed with beer ? https://t.co/UHLzxnXRQU

crying on the floor of my bedroom with my cat https://t.co/0hFY4Ql0fi

Lost them in this mess of people. Such a great night. Can't​ wait to do it again soon. pic.twitter.com/ULElVLpuDu

Screaming, jumping and crying in an Irish Pub in Manhattan with my family and friends from Ohio. Amazing experience! pic.twitter.com/rACOYcBtTc

By myself in Missouri. Crying and skyping my family, but also packing for Vietnam and to move out of my apartment. https://t.co/pRKj80vEHr

Nothing better than celebrating with the Fam! pic.twitter.com/gXr1YviTuV

There was just a lot of crying and screaming because we were so happy for my dad! pic.twitter.com/E23TMYHKLL

These are just some of the moments we were told on Twitter.

Where were you when the Cavaliers brought home the title?