Report: The Browns Have Eyes on QB DeShaun Watson at 12; Will He Last That Long? 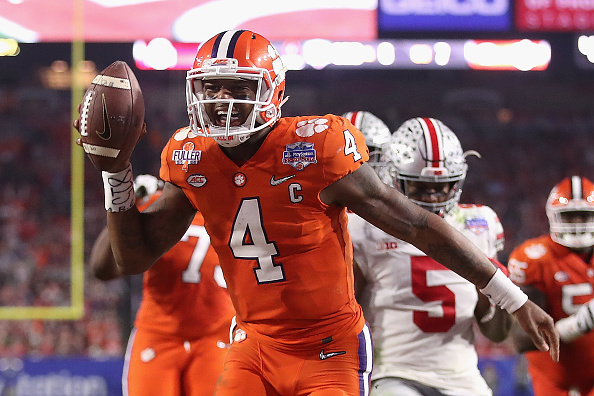 If you check out most mock drafts, the Browns with their first two picks are taking a quarterback, with most having them taking either local wonderkid Mitch Trubisky or possibly Clemson quarterback DeShaun Watson.

Today on the Dan Patrick Show, the thought was thrown out by Patrick that the Browns are very much in the corner of taking Watson, but there could be a team in the way of Cleveland landing the quarterback – the New York Jets.

Dan Patrick @dpshow just said #Browns want Deshaun Watson with No. 12 pick, but are worried Jets will take him at 6

With the Jets having the pick six ahead of the Browns, and needing a quarterback as well, it looks like they might have the pick of the litter of whoever they want, leaving the Browns with the QB left at 12 should they go that route.

New York has tried, like the Browns, to land a quarterback the last few seasons, taking Geno Smith in the 2nd round of the 2013 Draft, and the last two seasons resorting to veteran Ryan Fitzpatrick.

It wasn’t that long ago the Jets went hard after and landed Mark Sanchez with the 5th overall pick of the 2009 NFL Draft. Sanchez, who just inked with the Bears not that long ago, led New York to two AFC Title games in the 2009 and 2010 season.