Report: Already Takers Out There if Browns Want to Move or Dump Manziel 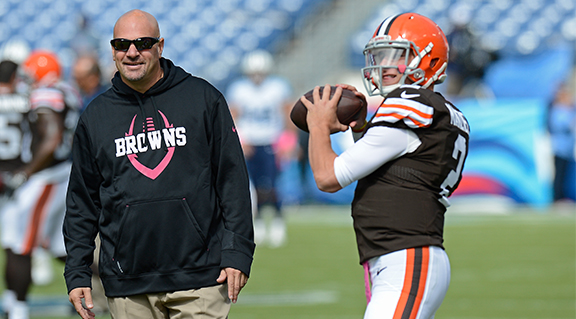 It seems apparent that quarterback Johnny Manziel is not in the Browns future, and it’s getting harder and harder to think that Manziel is going to be part of the team come 2016.

With that, there’s a couple of teams that would reportedly have interest in Manziel, as today ESPN NFL Insider Adam Schefter said in a radio interview with ‘The Dan Patrick Show’ that he thinks no less than four NFC teams would have their eye on Johnny.

All those teams have issues at the quarterback spot, and all seem to be teams that would take risks when it comes to making moves and picking up a player like Manziel.

.@AdamSchefter says Rams, 'Boys, 49ers have looked hard at Manziel at some point. And Chip Kelly. "Somebody's gonna roll the dice on him."

The question would be – what would the Browns get in return, or would those teams only be willing to deal with Manziel if he was on the market after the Browns released him?

Many Browns fans are still not happy about he decision to not start Manziel over Austin Davis, and the future seems set in stone that the Browns have already given up on one of last seasons first-round picks.