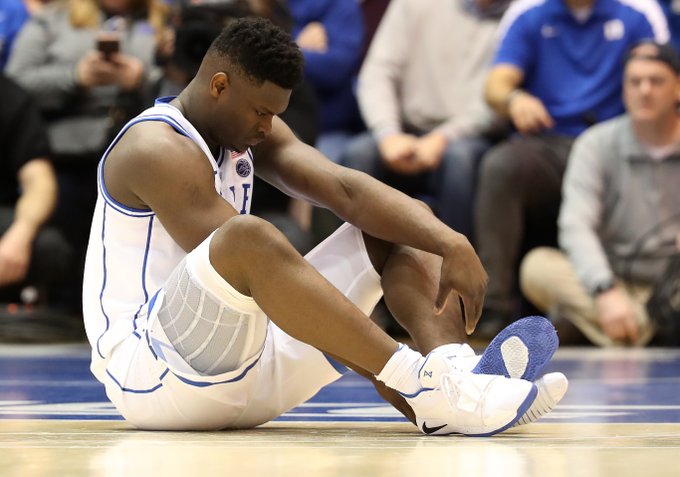 The Cavs and their fans have been keeping an eye on Duke standout freshman Zion Williamson all season long, but last night just 33 seconds into their huge game against North Carolina, Williamson went down with a knee injury.

It was a horrible scene, as Williamson’s went down after his left shoe ripped as he planted with the ball.

He immediately grabbed the back of his knee as he fell to the floor, and left the game and the team stated that he had a mild knee sprain.

Here’s a video of the incident in case you have yet to see it:

The Cavs are ahead of the Knicks and Suns for the worst record in the NBA, so it might not matter as likely if Williamson is healthy he’s going to go to New York or Phoenix anyway.

There’s another interesting tidbit about Wiliamson, and that’s (according to Darren Rovell), he’s already taken out an eight million dollar insurance policy that would only kick in if he slips past No. 16 in the draft due to injury.

Again even with this setback that’s not likely to happen, but obviously the young freshman is getting good advice when it comes to taking out a policy….now the next question is will he continue to wear Nike shoes after Wednesday night’s injury?