Post-Game Reaction To Final Play From Cavs And Pacers 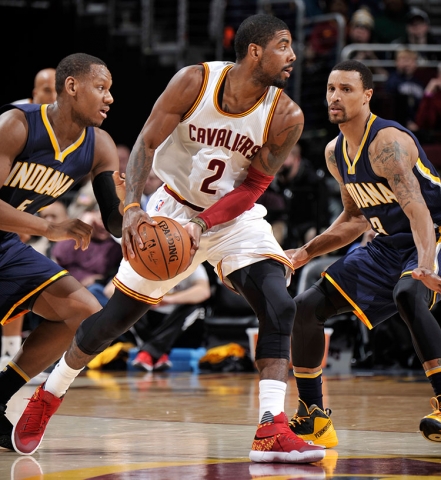 In the final seconds of the Cavaliers first playoff game against the Indiana Pacers, Cleveland found themselves only up by one, 109-108, with Indiana having possession of the basketball.

Paul George, who ended the night with 29 points, had the ball inbounded to him. But after the Cavs laid a trap on him almost immediately, he passed the ball off to C.J. Miles on the left baseline. Miles went on to miss the potential buzzer beating jumper.

After the game, Cavs head coach Tyronn Lue was pleased with the fact that his team ultimately won due to two defensive stops at the end of the game, especially in the wake of criticisms about the Cavs’ defense.

“Kyrie [Irving] came up with two big stops. He did a great job of guarding [Jeff] Teague one-on-one, and then he got the final strip at the end off of Myles Turner,” Lue said.

“To win that game, we needed defense and it was a good thing to see us get stops down the stretch.”

Lue said it was good for the team to win with defensive stops. pic.twitter.com/KACrKwkUKO

As LeBron James walked through the last play in his post-game press conference, he emphasized that it was incredibly important during the final sequence for the Cavs to stay alert once George gave the ball up.

“In our league, the guy who gives up the ball is sometimes the most dangerous because you tend to relax and he can come back and get it,” James said.

LeBron walks through the last play, and the importance of the Cavs staying alert when George gave up the ball pic.twitter.com/A52g2th1GT

Clearly, the Cavs were right to keep their guard up. George getting the ball back was the plan for the Pacers. After the game, George was visibly frustrated that he wasn’t the one who got the final look in the waning moments.

“Lance [Stephenson] was open, but that would have been a play that they were on. They were almost baiting me to throw that pass,” George said.

“I gave the ball up to try to soften them up to get the ball back. I talked to C.J. about it, in situations like that, I have to have the last shot.”

Paul George describing last play says "situations like that, I've got to get the last shot." pic.twitter.com/Q8QSio2VOd

When pressed further on George’s decision-making in the final moments, however, James did say he feels like George made the right decision.

“If you get doubled, I think we all know math in here. Then it’s four on three and you have your numbers. So he’s the best player on the floor, it doesn’t mean he has to take the shot,” James said.

“I think he made the right play, and he’ll live with the results.”

LeBron says he can only speak for himself but that he thinks Paul George made the right play in passing pic.twitter.com/xK7Iqkh9Il

George and James clearly had the exact opposite reactions to how the play turned out. And yes, on the surface level it’s easy to say that James simply thinks it was the right play because it benefited Cleveland.

But you have to remember, James has been in that same situation more times than he can count. He has been criticized (particularly when he was in Miami) for not taking the final shot in clutch moments.

Having the court vision that James does, he knows when he is double teamed or trapped that he is better off making the pass more often than not. At the very least, it will alleviate defensive pressure for himself so that he can potentially get the ball back a little later in the possession.

Realistically, that is what George was doing. There just wasn’t enough time left on the clock for him to get the ball back, and ultimately it cost Indiana the game.