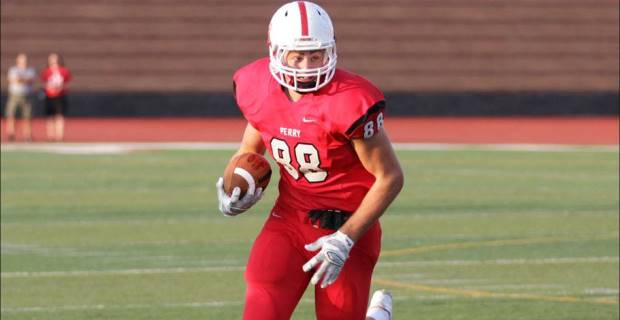 PERRY, Ohio – The first Wednesday in the month of February is one of most exciting days in the life of a high school senior and student athlete. It’s ‘National Signing Day’, the day when all of their hard work both in the class room and on the playing field culminates in the biggest decision of their lives to date, the next step in their academic and athletic futures.

Student athletes, not just in football, but in all athletic sports sign their official letters of intent to the college of their choice to continue both their academic and athletic careers at the next level.

Major college football receives the majority of the coverage on this day. The topic of conversation always surrounds which program will have the best recruiting class in the nation. The traditional power house programs will always top the list year in and year old.

Urban Meyer and the Ohio State Buckeyes will once again have one of the best recruiting classes in the country in 2016. Meyer will be bring in players from Maryland, Florida, New York, Illinois, Indiana, Kentucky, Michigan, New Jersey, North Carolina and Virginia.

Of course, Meyer didn’t forget to recruit here in the Buckeye state. Ohio State landed ten in state recruits in the class of 25. Meyer brought in kids from top high school programs in Cleveland, Cincinnati, Columbus and one from a smaller town along the shores of Lake Erie.

Perry Pirates tight end Luke Farrell becomes the first Perry player to play for the scarlet and gray. The division four program in eastern Lake County, Ohio (about 35 miles north east of Cleveland) usually has players move on to play at smaller sized colleges, not one the size of Ohio State.

Farrell made his committment to Meyer and the Buckeyes last summer and never changed his mind despite drawing interest from Michigan State and Notre Dame. Farrell made his decision early so he could focus on his senior season with the Pirates. Farrell did take a year to weigh all of his option before finally deciding to become a Buckeye.

The six foot six tight end helped lead the Pirates to a 9-1 regular season record and a birth in the division four region 13 playoffs. The biggest win of his senior season came in week three against their neighborhood rivals, the Madison Blue Streaks to reclaim the ‘Little Brown Jug” for the first time in four years.

This fall, Farrell will continue his football career for a man who is also familiar with the northeast corner of the Buckeye state. Perry is located just 20 miles south west of Meyer’s hometown of Ashtabula, Ohio, but that didn’t have much impact on Farrell’s decision to sign with the scarlet and gray.

“It’s a bonus,” Farrell said at his signing day ceremony at Perry High School. “It’s really an honor to actually put it on paper and just closing up this process for me. I never thought I would be in this position today, it’s just really an honor for me.”

It’s an honor for the entire Perry community to see one of their own become a member of Buckeye nation. His family and his high school coach Matt Rosati were just a few of many Perry residents who attended the ceremony Wednesday morning at the school’s Goodwin Theater.

A good amount of the student body were also in attendance to witness something that may never happen again in Perry Pirate athletics history. The ceremony began with a wonderful tribute of Luke’s entire football career beginning with youth leagues through his senior season and wrapped up with the official signing of his letter of intent.

Rosati will miss his start tight end but is also proud at everything he has accomplished in four years with the Pirates football program.
“Luke Farrell was a tremendous role model and a tremendous student besides football Luke is the ideal kind of guy that we all want to be,” Rosati said.

“After 27 years this is my first Ohio State guy so it’s a real thrill, a once in a lifetime thing and I’m just so excited for Luke and the community is thrilled to death.”

Farrell is joining the Buckeyes at a very good time. Ohio State is a little thin depth wise at tight end with Nick Vannett’s career with the scarlet and gray now over. Meyer and his staff also recruited Jake Hausmann a four star tight end from long time state powerhouse Moeller High School in Cincinnati. Both guys will compete to serve as the backup to Marcus Baugh beginning this fall.

“It’s a great opportunity for me and Jake because we’re going to be able to battle for the backup spot,” Farrell said. “They just told me and him that we should be ready for next year.”

And all of Buckeye Nation will be ready to see a small town boy perform on the big stage in front of over a hundred thousand fans in ‘The Horseshoe’ beginning in September.