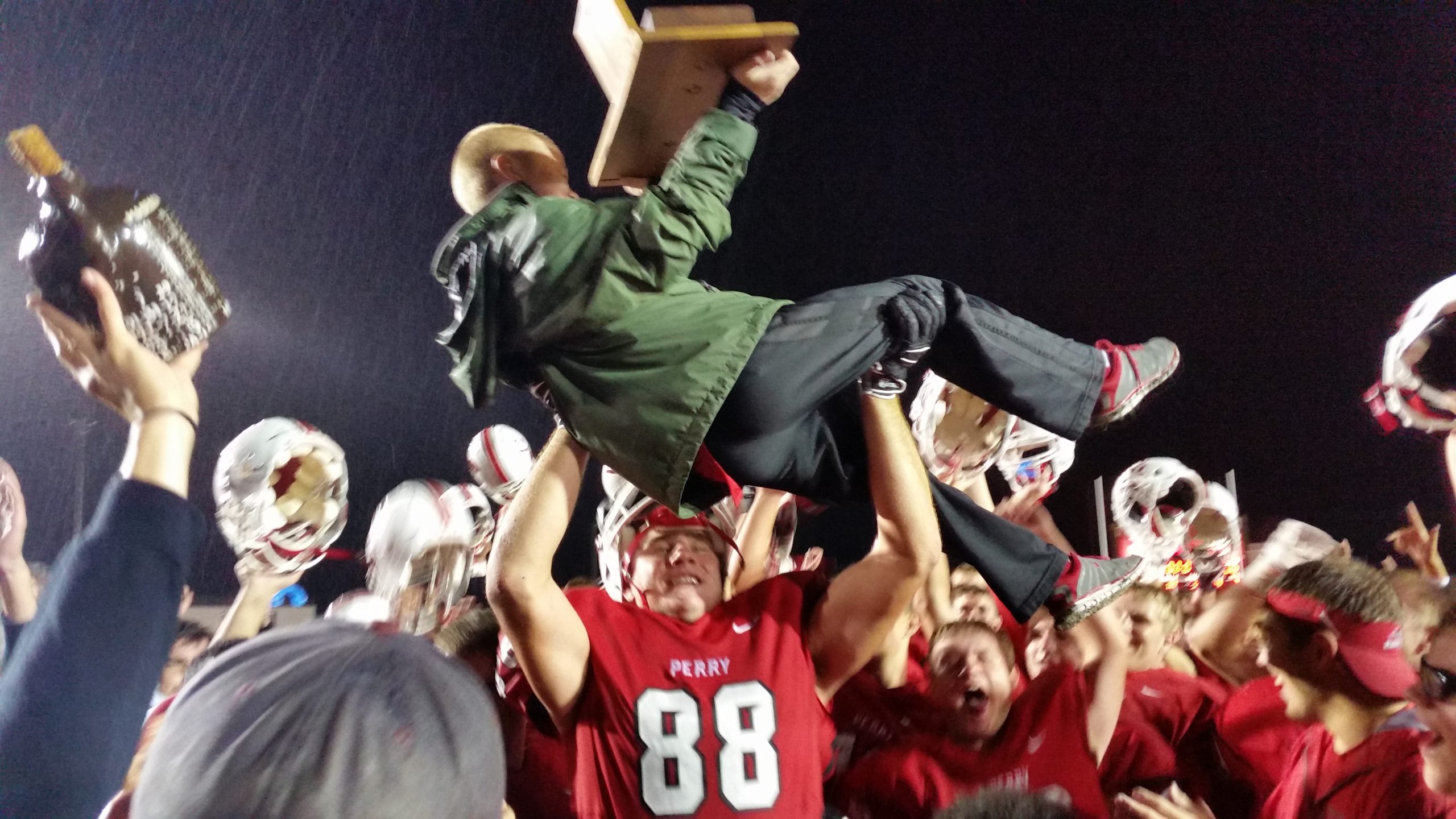 PERRY, Ohio – There have been plenty of classic battles throughout the years between the Perry Pirates and the Madison Blue Streaks with the “Little Brown Jug” at stake.

Friday night at Perry Alumni Stadium will certainly go down as an instant classic.

There were so many storylines going into the game. Perry looked to end a four game losing streak to Madison.

The matchup was the game of the week on both WJW Fox-8’s ‘Friday Night Touchdown’ and SportsTIme Ohio. One player takes the field for the opposite team of the team he played for in the previous meeting.

What else do you need, well how about a little rain throughout the game as well.

The Blue Streaks and Pirates battled not only each other in a very chippy game, but mother nature as well as rain fell all game long.

It didn’t bother the Blue Streaks on the first possession of the game.

Madison took a 7-0 lead when senior running back Nick Brooks broke through the Pirates defense and went 44 yards for the touchdown.

In just a minute and 17 second the visiting Blue Streaks took control of the game.

Perry would tie the game late in the first quarter. The Pirates feature one of the best tight ends in the country in Luke Farrell.

The senior who has already commiteed to play for the Ohio State Buckeyes was a big factor.

Farrell caught the first of his two touchdown receptions with 1:20 remaining in the opening quarter on a 29-yard pass from Jackson Burdyshaw.

The game wss even at seven after the first quarter.

The second quarter belonged to the Blue Streaks as they outscored the Pirates 12-0 thanks to a pair of big plays.

Neither score was produced by the Blue Streaks offense though.

With 7:09 remaining Isaiah McClure would field a Perry punt deep in his own territory.

With the help of a couple missed tackles and some terrific special teams blocks, McClure took the punt back 93-yards for the touchdown.

Madison would miss the extra point, but take the lead back at 13-6.

Just three minutes later Blue Streaks linebacker Lane Lucas picked up a Burdyshaw fumble and take it back 77 yards for the touchdown.

The Blue Streaks would attempt a two point conversion that was no good.

The Pirates would control the second half thanks in part to junior running back Josh Pertruccelli, who played for the Blue Streaks last year in this game.

The back would get Perry deep into Madison territory on the first possession of the second on a 53-yard run.

Pirates would capotalize on that big run and find the endzone on a three yard touchdown run by senior running back Christian Cooper to get Perry back within five at 19-14.

Madison would put together its best offensive drive of the night early in the fourth quarter.

The Blue Streaks got their 12-point lead back when senior quarterback Connor Smith hooked up with a wide open Nick Law and the senior tailback who lined up as a receiver on the play took the pass into the endzone for a 24-yard touchdown.

Burdyshaw would connect with Farrell again this time from 26-yards out to get back within five at 26-21.

“We ran a similar play a lot in the game,” Farrell said. “With the open area I surprised myself with the catch in the rain and everything to reel that one in it’s just an amzing feeling.”

Amazing would describe how the Pirates took their first lead of the night.

After Madison drove the ball down to Pirates 20-yard line on a 33-yard run by McClure and a one yard by Smith, Petruccelli made the biggest play in his high school career and one that fans on both sides of the rivalry won’t soon forget

Smith threw a pass to the far side of the field, Petruccelli read the route as the ball floated in the air.

Pettruccell would intercept the pass and take it all the way back 79-yards for the touchdown and a huge momentum swing as the Pirates took a 27-26 lead when it looked like Madison was going for a game clinching score.

“Yeah I saw it coming all the way,” Petruccelli said. “I had no idea I just started running I had no idea where I was going. This is definetly one of the biggest games I’ll ever play in high school.”

“We like to say big time players make big time plays and Josh stepped up and he did what he needed to do tonight,” Pirates head coach Matt Rosati said.”I’m so happy for him and i’m so proud of their effort tonight.”

Madison had one last drive to take the lead back. The Blue Streaks got to midfield.

Madison inserted junior quarterback Josh Gibson to throw the hail mary pass to the endzone with six seconds left. The pass would fall incomplete and the losing streak is over for the Pirates as reclaim the “Little Brown Jug” in a thriller 27-26.

“It means everything,” Farrell said. “Senior year to lose three straight years and to bring it back to go out especially with that kind of game right there, it was a game to the end and I couldn’t ask for anything more from my guys.”

“It’s tremendous, it’s a great feeling,” Rosati said. “Our guys played so hard for the community and for our coaches and former coaches. I’m so proud of their effort, we’re glad to bring the jug back home.”

Perry improves to 3-0 while Madison falls to 2-1. Both teams begin conference play next week.

The Pirates host the Beachwood Bisons. The Blue Streaks travel to Brush to take on the Arcs.

Check out Some Pics of the Action from Friday Night!