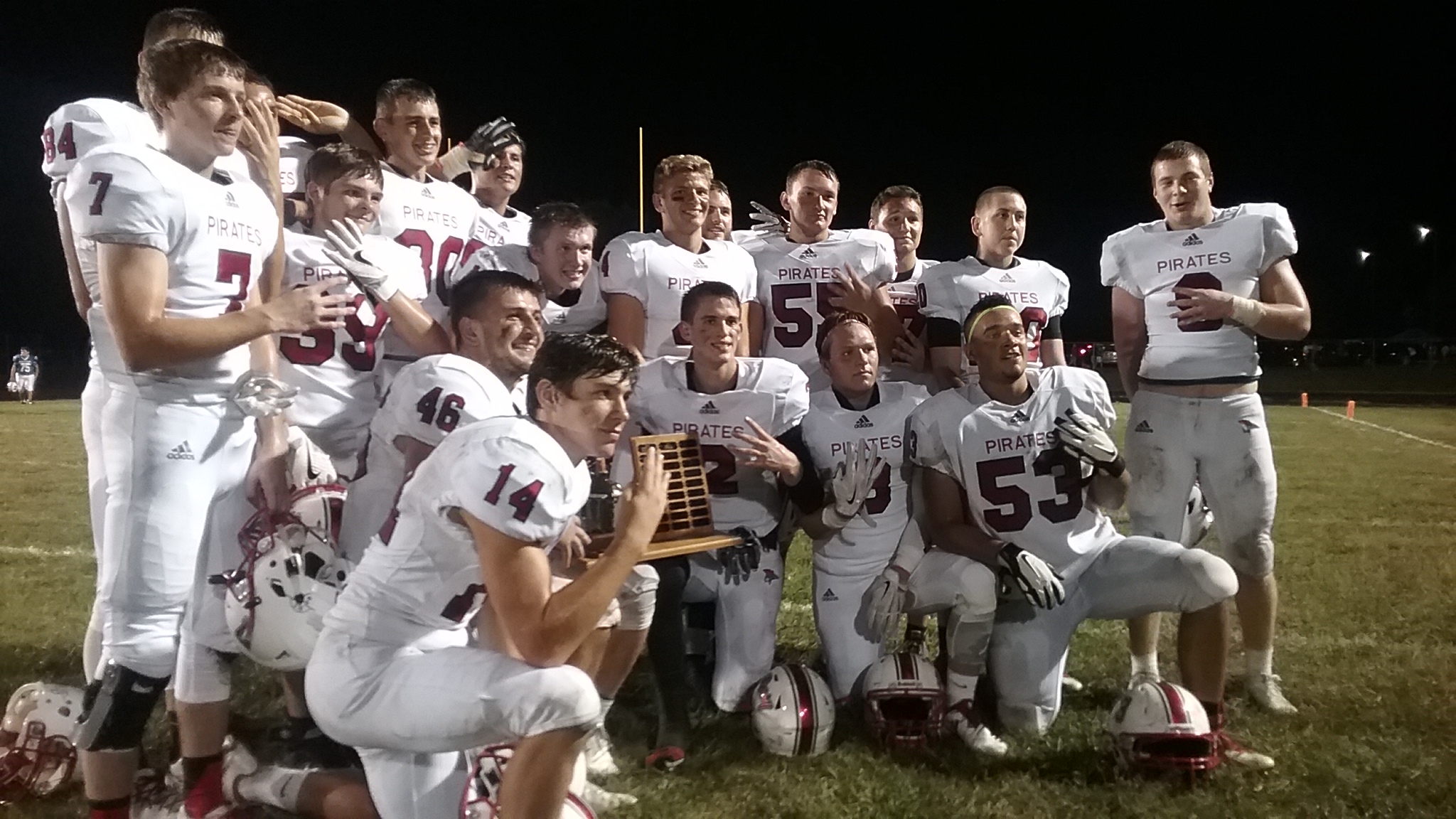 MADISON, OHIO– The last seven days have been very difficult for the Perry Pirates football program and the Perry community as a whole.

The Pirates were preparing to face their neighborhood rivals the Madison Blue Streaks in the battle for the ‘Little Brown Jug’ coming off an overtime loss to the Chardon Hilltoppers. It was the first time head coach Matt Rosati’s Pirates have lost a regular season football game since 2015.

The Pirates were also without their two-way sophomore performer Jaylen Anderson. He is recovering from a meniscus injury in his knee suffered in the season opener at Painesville Riverside.

To make matters worse, the Pirates and the Perry community are dealing with the loss of a popular teacher in the school district, 36-year old social studies and English teacher Brandy Siegel. Siegel was also a volleyball coach for Perry.

With all of that in the back of their minds, the visiting Pirates came out a played a nearly flawless game in the 38-6 victory over the host Blue Streaks.

The Pirates scored the first 17 points of the contest in a span of just over 10 minutes. Perry takes a 7-0 lead on a Jacon Allen touchdown run. The touchdown came off a Blue Streaks fake punt attempt. Perry’s Cameron Rogers intercepted the fake punt attempt in Madison territory.

Allen would score his second touchdown of the quarter on its next possession. Allen would haul in a touchdown pass from junior quarterback Drew Schiano to extend the Pirates lead to 14-0.

Perry would make it three offensive possession resulting in three scores. Senior kicker Sampson Agostine would connect on a 27-yard field goal to give Perry a 17-0 lead.

Madison’s only points of the game would come late in the first quarter. Junior quarterback Alex Dragas would call his own number and go 55-yards for the touchdown. The Blue Streaks would miss the extra point and trail 17-6 at the end of the first quarter.

The rest of the game belonged to the visiting Pirates. Perry would take a 24-6 lead into halftime. Junior running back Deandre Malone would score on a 1-yard touchdown run halfway through the quarter.

The Pirates would extend the lead to 31-6 on the opening drive of the third quarter. Perry would march 80 yards capped of with a 4-yard touchdown pass from Schiano to senior wide receiver Jake Reid.

Reid would finish the scoring on defense. Reid would intercept Dragas deep in Madison territory and return the interception for the touchdown and a 38-6 lead.

Perry improves to 2-1 on the season. The Pirates keep the ‘Little Brown Jug’ for a fourth consecutive year. It marks the first time in Perry football history that the Pirates have won the rivalry game four times in a row. Rosati made sure to dedicate the retaining of the jug to Siegel and legendary coach, the late Bob Ritley.

“I’m very proud of our guys and how they played,” Rosati said. “Our number one goal was to come out here and play hard for our community on a day where we mourn the loss of Brandy Siegel. For the Siegel family and the Ritley family it’s all about them tonight and we celebrate for them.”

The Pirates improve to 2-1 on the season. Perry begins Chagrin Valley Conference play Sept. 14 against the Chagrin Falls Tigers. It will be Perry’s home opener in 2018.

The Blue Streaks fall to 2-1 on the season. Madison begins Western Reserve Conference play Sept. 14 against the Rebels of Willoughby South in Willoughby.