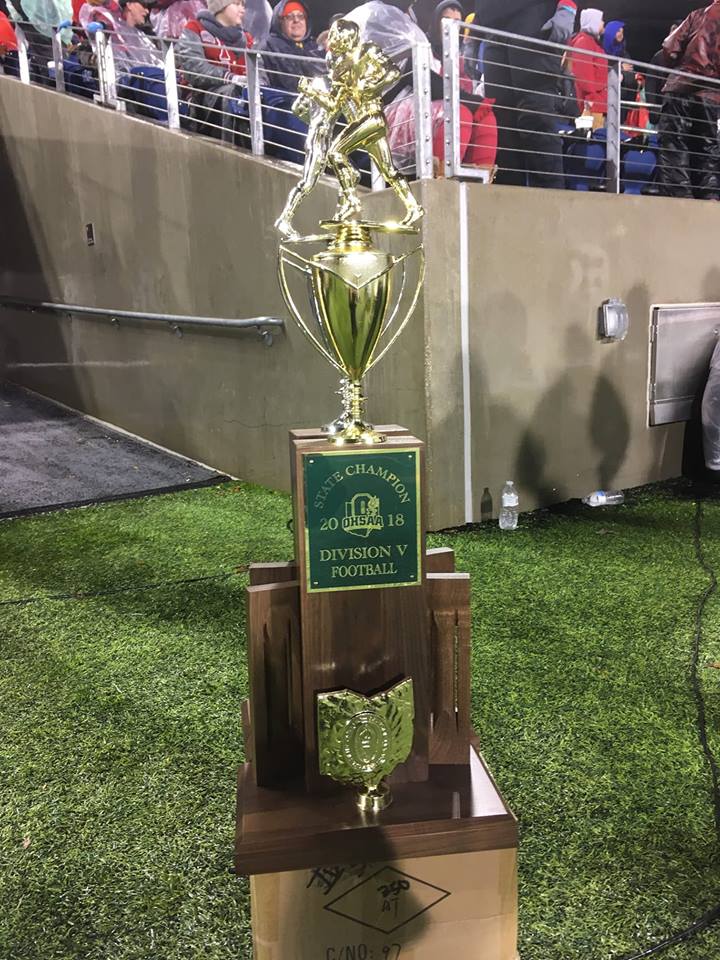 CANTON, OHIO – After a scoreless first quarter, the Orrville Red Riders poured on the offense to the tune of 49 points in 36 minutes to walk away with the OHSAA Division V Championship. The Red Riders defeated the Johnston Monroe Jonnies 49-34.

The Red Rider’s stuck to a tried and true recipe for Division V success, run the ball and play great defense. They did both to perfection on Saturday afternoon. Quarterback Logan Domer had the game of his life with 207 yards rushing on only 10 carries. He scored four times on the ground, including a 61 yarder. His great game on the ground was much needed as they didn’t pass much. Domer only threw the ball 10 times, completing 5 for 42 yards.

As impressive as his night was, his star tailback Marquael Parks had a game just as big. Parks went off for 198 yards and 3 scores on 22 carries. Between Parks and Domer, the Red Riders ran wild.

The Red Riders went for 425 rushing yards total, despite losing the time of possession battle to the Jonnies by six plus minutes. They piled on the yards and didn’t look back. They could have done more then they did, but a whopping 9 penalties for 85 yards halted what could have been a 70-point performance.

For the Jonnies they also did what you need to win on offense, but couldn’t get the needed stops on defense. They racked up 440 yards of total offense and their top running back was also their quarterback. Caden Calhoun went for 128 yards on 25 carries with a touchdown.

His top two tailbacks also had big nights. Bryce Barasch had 83 yards on 22 rushes with a touchdown. Luke Myers rushed for 74 yards on 20 carries, scoring twice for the Johnnies.

The Jonnies jumped out to a 7-0 lead after one quarter before the Red Riders would explode to take over the game. The Red Riders scored twice in the second quarter on two long Domer runs to take a 14-7 lead into the break.

They kept it up with more scoring in the third quarter. The Red Riders scored both times they had the ball in the quarter. This time with runs from Parks of 31 yards and another one by Domer, this time a 61-yard jaunt. The two Red Rider touchdowns nullified the two Jonnie touchdown runs by Myers to keep it a 7-point game at 28-21 heading into the fourth.

A wild fourth quarter saw five more touchdowns get put on the board, including three by the Red Riders to seal the 49-35 victory. Logan Domers touchdown runs of 36, 60, 61 and 13 yards proved to be the difference!