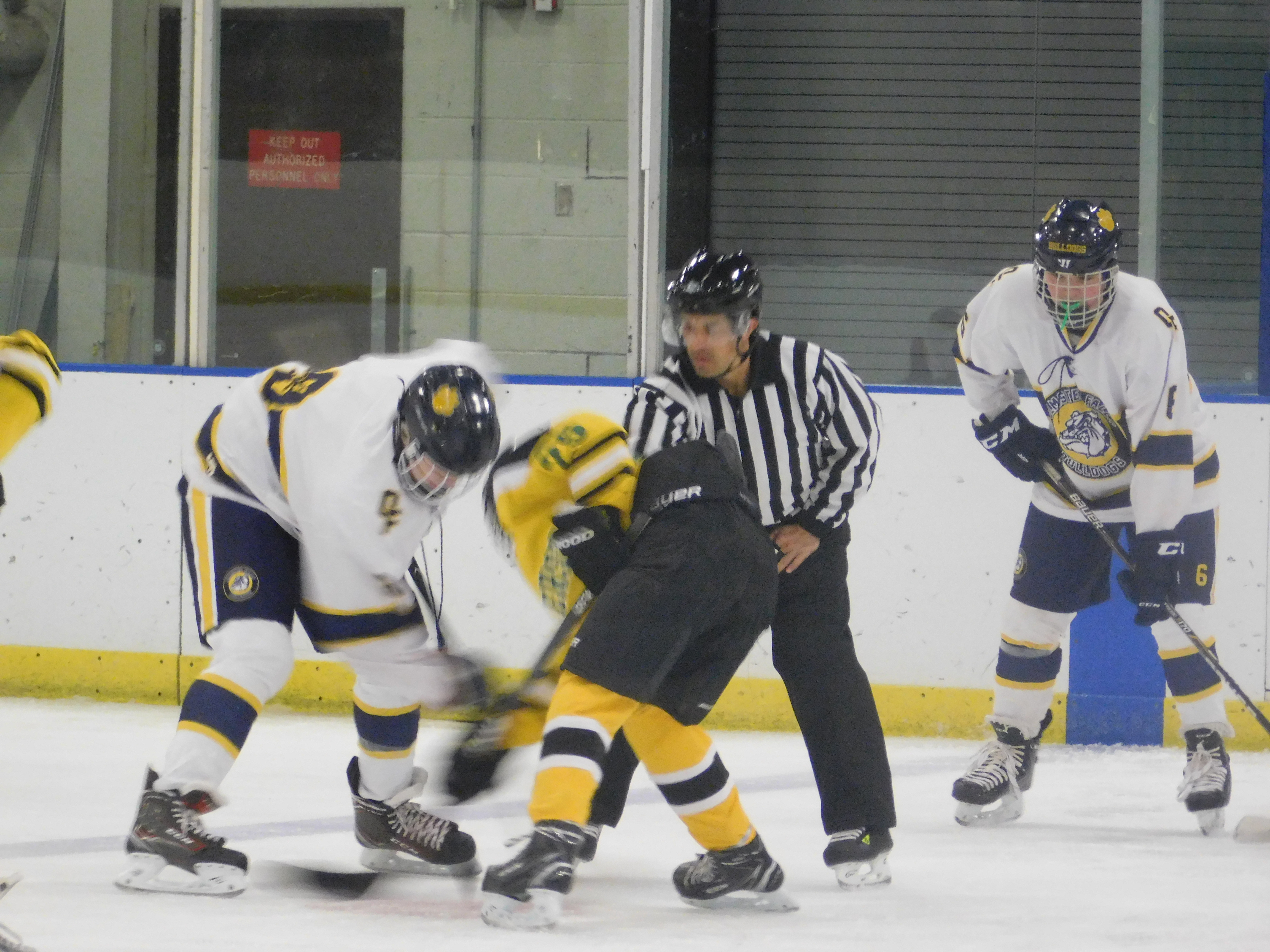 BROOKLYN, OHIO – The Olmsted Falls Bulldogs did something no one else has been able to do Sunday afternoon in Brooklyn against the Amherst Comets.

They made it a long day for the Comets defense, scoring seven times and skating away with a solid 7-4 victory to move to 2-0-1 on the young season.

It was the first time this season the Comets had been roughed up, as they had shown great promise already this season, winning a recent tourney at Miami University.

Saturday they defeated Gilmour 6-1, but Sunday were no match for a much more faster, physical Bulldogs team who took it to the Comets early, building a 5-1 lead after two periods and making it a tough day for Comets goalie Brady Grove.

To their credit Amherst rallied back, and made it a game with three goals in less than six minutes in the third period, to draw it to a one-goal game at 5-4.

The Bulldogs though put the game away, scoring the final two goals of the contest to finish out the scoring at 7-4 to seal the victory.

Olmsted Falls goalie Angelo Hanson collected the win in net for the Bulldogs, turning back 19 shots in the victory.

Center Don Conte was the driving force on offense for the Bulldogs, putting up a hat trick and sealing the win with an empty net goal in the final minute. He also had two assists in the win.

The Bulldogs didn’t take long to get on the board, as just 32 seconds into the game the lit the lamp to take a quick 1-0 lead.

The goal off the rebound went to Max Kirth-Gruszczynski, with the assist going to Conte who had the original shot on net.

Controlling play for most of the period the Bulldogs were hit with a hooking penalty, but killed it off allowing just a single shot on net to the Comets.

Olmsted Falls also got a fantastic save from Hanson in net, keeping the Bulldogs ahead 1-0.

They went up 2-0 after the Comets were hit with two penalties late in the first period, one for hooking and another for high sticking.

The power play goal was credited to defensemen Jacob Kerkay, with Conte collecting his second assist of the day with 4:29 to play in the first period.

The Comets finally got on the board, scoring just after they were able to kill off their second penalty.

The goal came on a beautiful breakaway after a steal of the puck at center ice. Center Jacob Kramer made a nice move on Hanson and scored the goal to make it 2-1.

The first 15 minutes would end that way, as the Bulldogs led on the scoreboard 2-1 and also led in shots on goal 7-5.

The second period was all Olmsted Falls, as they dominated the period scoring three goals to build a huge 5-1 lead. The first goal came 50 seconds in, and to make it even worse for Amherst it was a short-handed goal.

Conte scored the goal with the assist going to Hanson, who from the goalie position made a great pass and the center did the rest for the goal to make it 3-1.

Amherst had issues being able to do much against the much more aggressive Bulldog defense, and 3:12 into the period Olmsted Falls pushed their lead out to 4-1.

It was Conte again scoring the goal, with Kerkay and defensemen Austin Hemman getting the assists for the Bulldogs.

Keeping the pressure on the Bulldogs scored yet again to make it a four-goal advantage, as Brady Fitzpatrick found the back of the net with Kerkay getting the assist with 4:19 to play in the second period.

Despite trailing by four, the Comets outshot the Bulldogs in the second period 8-7.

The Comets didn’t go quietly, as they made it an interesting affair in the third period, scoring three times in rapid fashion to close the four-goal Bulldog lead down to one in a hurry.

They got a goal from Jacob Fetke, another from Michael Giannuzzi, and a third by Kramer, all in the span of six minutes to make it a 5-4 game.

The Bulldogs were able to hold off the rally, and they put the game away with a huge goal with six minutes left from forward Zach Henly to make it a 6-4 game.

Conte completed his big day with his third goal, sealing the hat trick with an empty net goal to finish out the scoring and a Bulldogs 7-4 victory.

The Comets drop to 2-1-0 on the season, and will be back in action Tuesday evening at 8:30pm in a home matchup with the Avon Eagles.

The Bulldogs will host the Parma Redmen on Sunday, December 10th at 4:15pm in Brooklyn.

Click the Pages Below to See More Pictures From the Game between Olmsted Falls and Amherst!