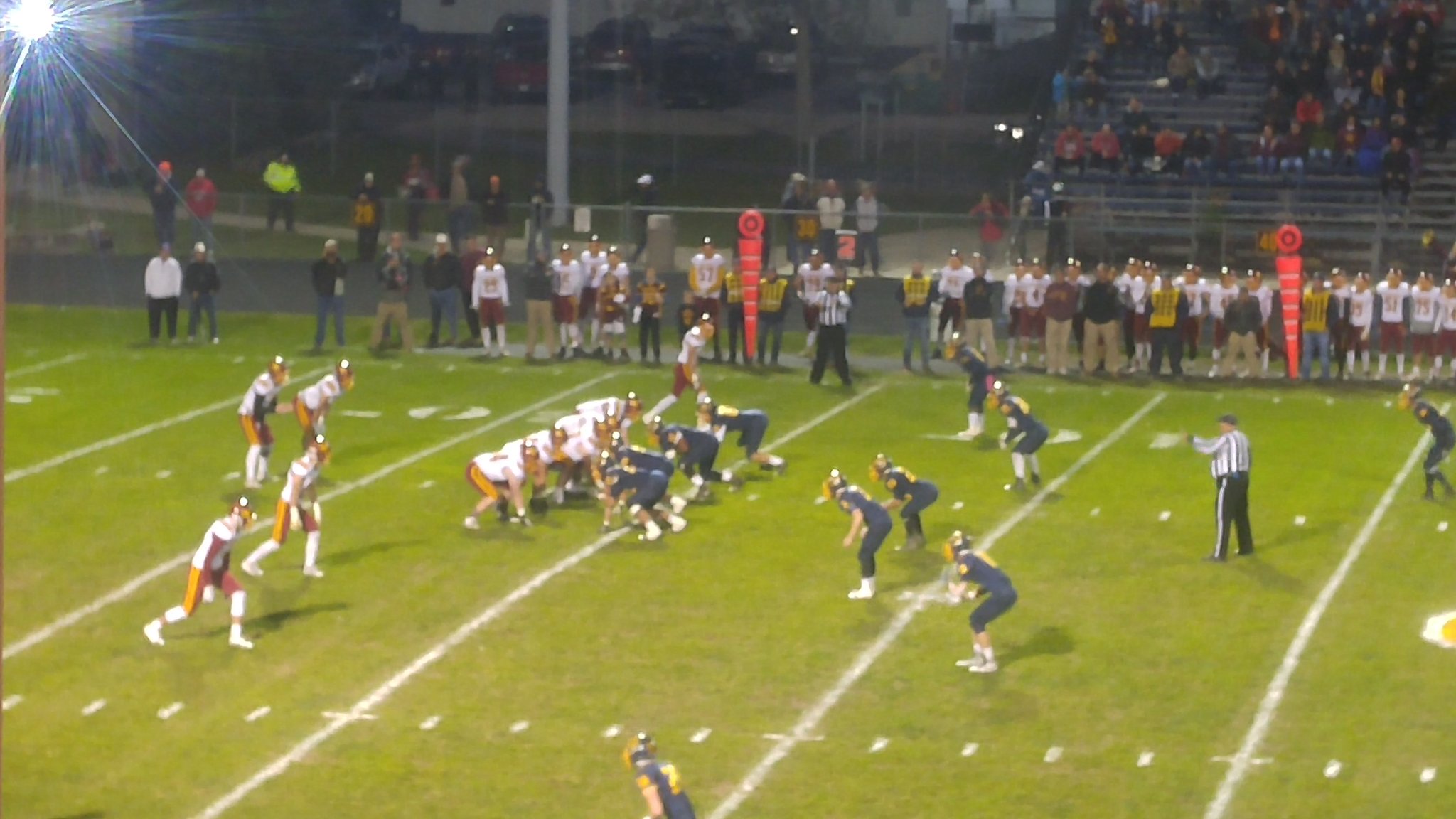 This game recap is brought to you by Westlake Interior Painting

Avon Lake traveled to Olmsted Falls tonight in a battle of the SWC’s two best rushing attacks. In the end, the Shoremen saw their bid for an unbeaten season come to an end at the hands of Jack Spellacy and the Olmsted Falls Bulldog 34-31.

The Shoremen had the lead 31-27 late in the game, after overcoming a 27-17 deficit only minutes earlier. That is when Olmsted Falls head coach Tom DeLuca took a huge gamble on fourth and one at his teams own 39-yard line with 4:22 left in the game. DeLuca called for a sweep to Spellacy who proceeded to take it 61 yards for the game winning touchdown.

It was part of a huge night for Spellacy who had a whopping 324 yards on 33 caries with 4 touchdowns. Spellacy spoke after the game about what exactly happened on the game winning play,

“That was a risky call but it worked. We knew that they would load the box so we went outside and it worked! Full credit to the line as they are the reason as to why I’m at where I’m at. I was trying to turn on the motors and go because all game they had me from behind, and the one kid almost had me on that play as well.”

It was a very gutsy call with still four minutes left in the game, against the top team in the division, but coach DeLuca explained why he did it,

“We couldn’t afford to give them another opportunity to have the ball playing from behind, so there was really no decision. We went to empty because they were stacking the box on us and got to the perimeter. Jack broke a tackle and made a great play.”

The Shoremen struck first on the opening drive of the game. It was a potent attack that saw them methodically pace down the field, running 13 plays and taking nearly six minutes off the clock. On the drive, Konnor Riggs had 25 yards including the final 13 yards to open the scoring. Riggs finished with 132 yards on 25 carries, scoring 3 times.

The Shoremen would get the ball back after forcing a turn over on downs and appeared to be driving for another score. It was then that a Jack Mikolich pass was picked off at the four-yard line by the Bulldogs. They would use that momentum swing to drive 96 yards to tie the game. The final play coming on a Spellacy 1-yard dive as the clock ran out on the first quarter.

After a Harry Hebert 32-yard field goal put the Shoremen back up 10-7, the Bulldogs wasted no time answering with a score of their own. They would take a 13-10 lead into the half as once again it was Spellacy punching it in. This time from 9 yards out. They would miss the extra point however but held the 3-point lead into the break.

That score was set up on a beautiful pass from Mikolich to Creed Bolognia of 24 yards. Mikolich put the pass where only his receiver could catch it. An absolutely beautiful pass that some professional quarterbacks struggle to make.

Down 27-24, the Shoremen took the lead on a Mikolich quarterback keeper from the goal line. Mikolich had a huge drive which saw him make several clutch plays. Twice on the drive Mikolich converted fourth down and 1 situation’s with quarterback sneaks up the middle.

Mikolich had a fine night with 68 yards on the ground and a touchdown. He connected on 15 of 26 passing for 213 yards with two interceptions and a sack.

It was then that the Bulldogs engineered what would become the game winning drive with a great combination of runs from Grendzynski, Michael Howard and Spellacy, that would see the climatic touchdown. Grendzynski finished with 49 yards on the ground as well as 79 yards in the air on 2 of 2 passing with the touchdown to Galaska.

It was Braden Galaska who would have the defensive play of the night as well. He picked off Mikolich with a little over two minutes left in regulation to put the game away.

Next week the Shoremen close the regular season at Midview while the Bulldogs travels to North Olmsted. That game will have major playoff implications.

Tonight’s player of the game is Olmsted Falls running back Jack Spellacy with 324 yards and 4 touchdowns.