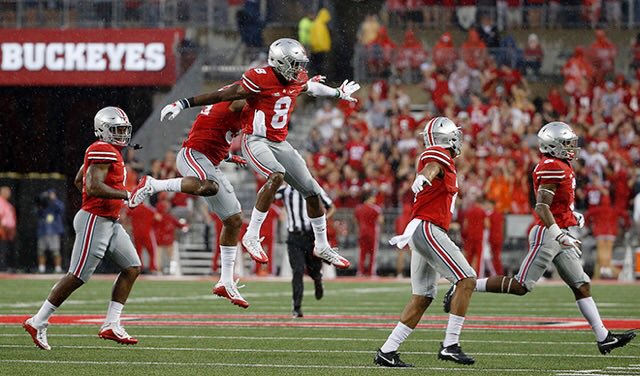 Oklahoma backup quarterback Austin Kendall appeared on a local tv show to talk about the upcoming game against Ohio State.

First off, it must be a highly-rated show to land the backup qb for an exclusive interview.

During that interview, when asked about the upcoming game, Kendall said Ohio State had “a really basic defense.”

He also said that starting quarterback Baker Mayfield would “light ’em up.”

Kendall even had the audacity to say that if he plays, he would “do the same.”

So the Oklahoma Sooners, who came into the season ranked third, got beat by a non-major conference school (no disrespect to Houston) and enter play with a record of 1-1, are giving Urban Meyer and the No. 3 ranked Buckeyes bulletin board material?

Good luck with that.

Kendall can say his Sooners will light it up on Saturday, but we’ll see who gets smoked when it’s all said and done.

Watch the backup quarterback’s poor choice of words below.

Here is the video. Have fun with the Buckeyes "Basic D" pic.twitter.com/Ci1WhFFxFP

Cornerback Marshon Lattimore seemed to think it was pretty funny.