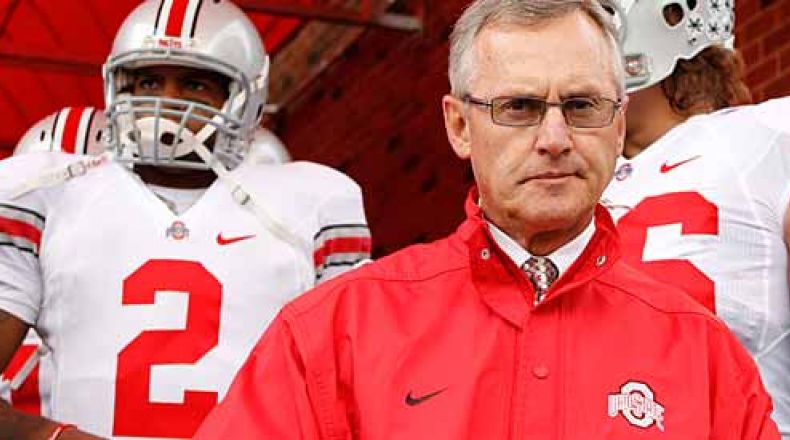 Before Urban Meyer lead the Ohio State Buckeyes to the inaugural College Football Playoff National Championship, the last coach to lead the scarlet and gray to a national title was Jim Tressel, Saturday, the university will honor their former coach for his accomplishments during his tenure in Columbus.

Ohio State will honor Tressel before their game at Ohio Stadium against the Huskies of Northern Illinois University at 3:30 p.m.

The Buckeyes are honoring Tressel for his induction into both the College Football Hall of Fame and the Ohio State University Athletic Hall of Fame.

Tressel coach the Buckeyes from 2001 through 2010. While walking the sidelines of ‘The Horseshoe,’ Tressel lead the scarlet and gray to seven Big Ten championships, the 2002 National Championship and an impressive 9-1 record over rival Michigan.

Tressel resigned on Memorial Day of 2011 because of not informing the university of NCAA violations involving the football program. The scandal was referred to as ‘Tattoogate.’

Players would trade championship rings, jerseys and other football related awards for tattoos which is an NCAA violation.

After his resignation, Tressel spent one season as a consultant for the Indianapolis Colts, before taking a job outside of football and athletics at the University of Akron. Tressel is currently the president of Youngstown State University.

Before taking the head coaching job at Ohio State, Tressel spent 15-years as the head coach of the Penguins and lead the program to four Division 1-AA National Championships.

Ohio State will hold the ceremony before Saturday’s game so Tressel can return to Youngstown State to attend their game against St. Francis University of Pennsylvania at 4:00 p.m.