Ohio State Opens Up as Rare Underdogs Against Rival Michigan 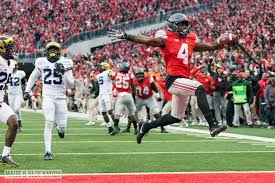 CLEVELAND Ohio State has been home favorites for the past 51 games. It’s the longest in college football and dates back to the 2015 College Football Playoff Championship.

Their most bitter rivals, the Michigan Wolverines, roll into town on Saturday, the most anticipated game of the season. Ohio State has only one loss against Michigan dating back to 2000. The last time Michigan beat the Buckeyes was in 2011 when 8-point favorite Michigan beat Ohio State 40-34 at “The Big House.”

Caesars Palace in Las Vegas, Nevada has favored the Wolverines 3.5 points against the Buckeyes on the road.

Michigan has proven to be one of the top teams in country both offensively and defensively. Ohio State has continue to struggle on the defensive side of the ball, easily their biggest weakness as a team.

In their most recent game against Maryland, Ohio State surrendered 298 yards and two touchdowns on 21 carries against freshman Anthony McFarland.

It couldn’t be more clear how much the Buckeyes miss Nick Bosa, who has declared for the NFL Draft and will be a top draft choice. In total, Ohio State gave up 339 yards on the ground against Maryland. They went to overtime verse the Terrapins and won a defensive stand by a score of 52-51 after a failed two-point conversion.

For Ohio State, the playoffs is unlikely at this point. A bad loss on the road at Purdue and near upset against Maryland has put a one-loss Buckeye team in deep waters.

The playoff committee will release their rankings Tuesday evening. It will be interesting to see where Ohio State will land with a bad performance. Michigan will stay at number four. Making this the most important game for their program to date.

Jim Harbaugh hasn’t won a game against Ohio State since being hired by Michigan. Harbaugh was hired back in late 2014 after Michigan went 5-7 with Brady Hoke.

Since then, Harbaugh has gone 38-12 as head coach of Michigan. He is looking for that elusive win over the Buckeyes. He is 0-3 against Urban Meyer and company.

Speaking of Meyer, he has yet to lose a game to Michigan. Meyer has always put a major focus on Michigan before the season even begins. This year is no different, as “Beat Michigan” has been mindset for the Buckeyes all year. Meyer is 6-0 against Michigan.

For both teams, a potential playoff birth is at stake. Two one-loss teams, bitter rivals, two top-tier programs. Welcome to “The Game.” Get ready for wild thanksgiving weekend match-up.

Kickoff is at Noon on FOX. Michigan is currently 3.5 favorites on the road. Both teams are 10-1 on the season are fighting to be the Big Ten East Champions.