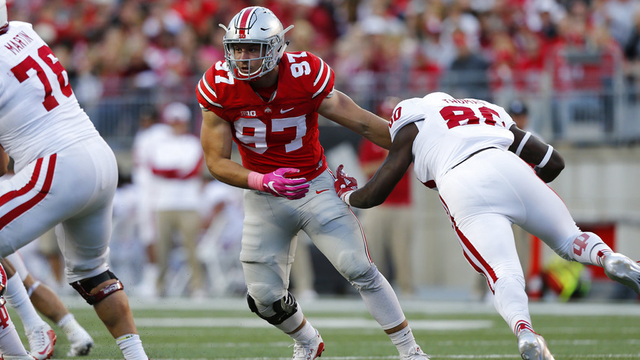 This Buckeyes update is brought to you by our official Buckeyes Sponsor, Gameday Tavern.  Make sure to check them out this week as the Buckeyes travel to Purdue Saturday Night at 7:30.

Buckeyes defensive end Nick Bosa will not be back with Ohio State this season, and has withdrawn from school to focus on his rehab of an injured core muscle.

The All-American will put his focus on the NFL Draft next year, where he’s expected to be a top pick at the DE spot.

“I was hopeful that Nick would be able to return to play again for us,” Ohio State coach Urban Meyer said in a statement released by the Buckeyes.

“I know this was an extremely difficult and emotional decision for Nick and his family, and I wish him well as he moves on to get himself 100 percent healthy and ready for his next chapter. I want to thank Nick for the remarkable efforts he gave for this program. He is a first-class young man who we have been honored to coach.”

The junior defensive end has been out since injuring his core muscle September 15th in a 40-28 win over TCU.

He had surgery on September 20th and has since been recovering since then. He was already ruled out for this weekend’s game against Purdue.

His brother Joey is a member of the Los Angeles Chargers, he was picked third overall in the 2016 NFL Draft after a stellar career with the Buckeyes.