Odell Shows Out in Dallas, Browns Go To 3-1 After Beating Cowboys 49-38 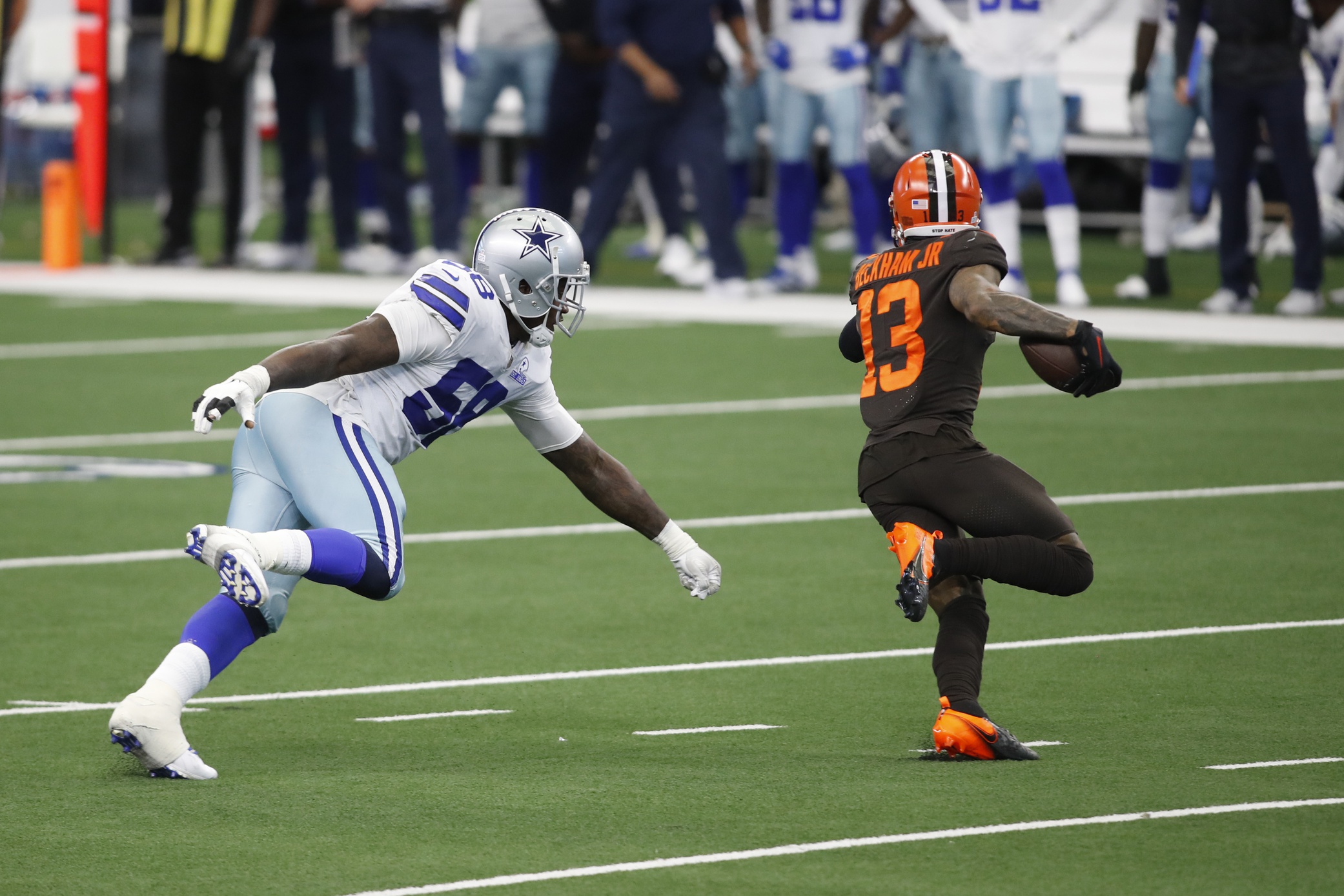 The Cleveland Browns went on the road to Dallas on Sunday for an early season litmus test against the Dallas Cowboys.

Both offenses traded blows early, until the Browns pulled away in the second and third quarters. The fourth saw the Cowboys make a valiant effort to put themselves within three points, but a late 50 yard touchdown run from Odell Beckham Jr. put the icing on a 49-38 victory for the Browns.

The Browns started the game on defense against the hot Cowboys offense. However, an eleven yard loss on a sack from Myles Garrett halted the Cowboy momentum, forcing a three and out.

Following the defensive stand, the Browns put together an impressive touchdown drive. The drive took only 4 plays, with Jarvis Landry finding Beckham in the end zone on a 37 yard trick play pass to take an early 7-0 lead.

After the score, the Browns defense struggled to stop the Cowboys offense, blowing a coverage to allow a 43 yard touchdown pass from Dak Prescott to Ceedee Lamb that evened things up at seven.

To follow up the score, the Browns offense drove all the way to the Dallas 49 yard line. However, a third down incompletion from Mayfield forced the Browns to punt.

In the ensuing drive, the Browns defense struggled once again to stop the Cowboy offense. Nine plays later, Prescott found Cooper in a tight window for a 20 yard touchdown catch on fourth and two to put the Browns down 14-7.

Facing their first deficit of the game, the Browns were desperate to respond. Doing just that, capping off an impressive nine play drive that took things into the second quarter, with Mayfield finding Beckham in the end zone on a slant route to tie the game.

With the game tied, the Browns defense finally put together a stop of the Cowboys offense with a first down strip sack from Myles Garrett on the first play of the drive, the first stop for the defense since the opening drive.

Taking over at the Dallas 34 yard line after the fumble, the Browns offense took advantage, scoring four plays later on a one yard touchdown catch by Austin Hooper to take a 21-14 lead.

After taking the lead, the defense allowed a big run on the first play of the drive. However before getting Elliott down, Andrew Sendejo was able to strip the ball to once again turn the ball back to the offense with good field position.

The offense took advantage again, with a six play drive with Kareem Hunt finding the end zone on a two yard run to extend the lead.

The Cowboys offense was able to put together a drive to midfield in the ensuing drive, before momentum halted and the Browns defense forced a punt.

The Browns defense got the ball with just under four minutes to go in the half, driving down the field , adding in a 37 yarder from Cody Parkey to end the half with a 31-14 lead.

The Browns opened the second half on offense, driving right down the field before a Kareem Hunt 14 yard touchdown run gave the Browns a 24 point lead.

Following up the Browns score, both defenses were able to force three and outs to slow the scoring down.

Coming back out on the field the Browns defense allowed the Cowboys to drive down to their own 33, before a failed fourth down conversion forced a turnover on downs.

The Browns took over at the 33 yard line, driving the ball down to the Dallas 26, before a Cody Parkey field goal gave the Browns a 41-14 lead with under a minute to go in the third.

The Cowboys offense began their march back into the game with an 11 play touchdown drive that extended into the fourth quarter to cut the Browns lead to 19.

Looking to run out the clock, the Browns offense began to be stopped by the Cowboys defense, as they only put together five plays before punting in the ensuing drive.

After the Browns punt, the Cowboys offense once again marched right down the field on the Browns, with the drive ending on a 26 yard touchdown pass from Prescott to Dalton Schultz.

The Browns were now only up 11 points with just over six minutes to go. However the offense went three and out, and once more had to punt the ball back to the surging Cowboys offense.

The Cowboys took just over two minutes and eleven plays to score for the third time in the quarter, adding in their third consecutive two point try to cut the Browns lead to three.

Needing to ice the game with a little over three minutes to go, head coach Kevin Stefanski opted to run a reverse to Beckham on the first play of the drive. Beckham delivered, weaving in and out of traffic to run all the way to the end zone with a 50 yard touchdown down run to put the lead at 11.

The Cowboys offense looked to get back in the game with a score to set up an onside kick try, driving all the way down to the Cleveland eight to set up first and goal.

However, Prescott was looking for Amari Cooper on a quick slant route that was intercepted by Denzel Ward to seal the Browns 49-38 win. The Browns go win a big game on the road and move to 3-1 on the season.