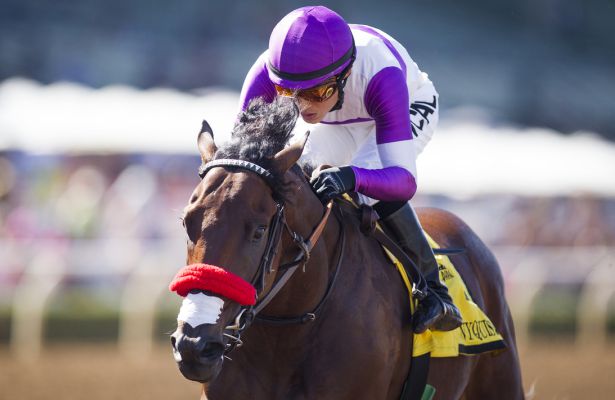 Preakness – Nyquist entered the race at 3-to-5 odds but couldn’t hold off Exaggerator as his pursuit of the Triple Crown ended after just one race.

The 1 3/16 mile track was pure mud and it became anyone’s race early on in the slop. Nyquist took the lead in the back stretch and looked to make it two in a row before Exaggerator, ridden by jockey Kent Desormeaux, overcame a 13 stride lead to win.

It was the first loss for Nyquist, as his record turns to 5-1.

In other news, few realize that Exaggerator was the runner-up in the Derby. 29 of the 50 Derby winners who entered the Preakness have lost, making the Belmont in a few weeks, pretty much un watchable as there is no Triple Crown on the line.

There was some sad news to report today however at as two horses died in the day’s first four races, and one jockey was hospitalized with a broken collarbone.

The first of the tragedies occurred when Homeboykris died after winning the first race of the day. The horse suffered a heart attack after leaving the winner’s circle. Sadly it would not be the last death of the day.

Later on in the afternoon during the the fourth race, Pramedya broke her leg and was euthanized on the track in front of everyone to witness. Making matters even worse was the fact that Pramedya’s jockey, Daniel Centeno, was thrown to the muddy track and also injured.

This is not the first time the Preakness has been witness to tragedy as it was ten years ago when Kentucky Derby winner Barbaro suffered mortal injuries at the Preakness in his pursuit for the Triple Crown.

Truly a sad day in Horseracing…..

The final race of this year’s Triple Crown will be the Belmont Stakes, set for June 11 at Belmont Park in New York.

Anderson Set to Start for Indians Against White Sox During Doubleheader on Monday?
DeRozan, Biyombo Dominate Cavs in 99-84 Game 3 Victory