No Fourth Quarter Magic In Tennessee; Browns fall to Titans 28- 26 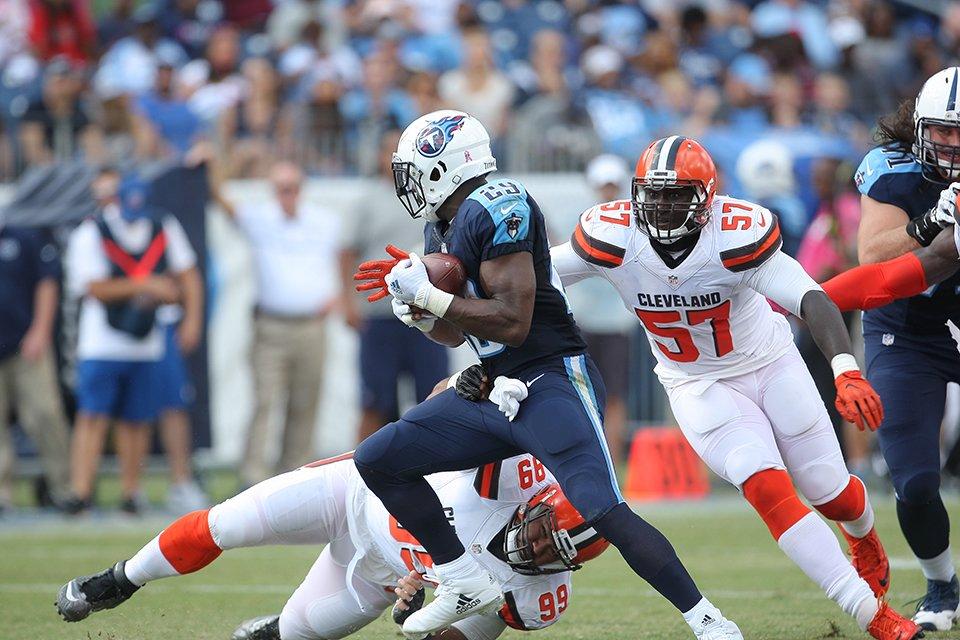 A fourth quarter comeback was not happening today as the late efforts of the Cleveland Browns weren’t enough to notch their first win of the season over the Tennessee Titans.

It was rough right from the first start for the Browns as Tennessee QB Marcus Mariota turned on the jets and ran for 41-yards on the very first snap of the game down to the Browns 34-yard line. RB DeMarco Murray has been a consistent threat all season out of the backfield but the Browns held him to negative rushing yards in the first drive. Although they held the Titans in check for most of the drive, Mariota found Rishard Matthews for an 11-yard touchdown on 3rd and 15 to go up 7-0. Cody Kessler was back after exiting last weeks game with a chest/rib injury and was looking to get the momentum back but even after a 43-yard reception to TE Gary Barnidge but ended up with only 3-points on their opening drive.

The Browns had another drive that was promising after a 39-yard pass interference call against the Titans but RB Isaiah Crowell was held to -5-yards and a missed block by C Cam Erving held the offense to another field goal attempt which was good and only trailed by one. Mariota finally showing his arm strength in the second quarter as he hit a wide open Kendall Wright for the 48 -yard score to add on to their lead and go up 14-7. The second quarter was not a good one for the Browns. They couldn’t convert on third down, punting from inside their own 10-yard line and can’t get anything going on the ground with Crowell. Right before the two minute warning, Kessler was forced out of the pocket and threw a 42-yard bomb to WR Ricardo Lewis which led to a 7-yard score from Kessler to WR Terrelle Pryor to cut the lead to one to end the first half.

In the second half, the Browns started with the ball but couldn’t covert on their first possession and were forced to punt. After scoring on their first possession of the first half, Mariota found Matthews again for a 43-yards which set up the 3-yard rushing touchdown from Murray to increase their lead to 21-13. Once again, the Titans defense shut the Browns down in a critical situation. The next Browns possession ended after a sack, a batted ball and a completion but not a conversion on 3rd and 20 and were forced to punt yet again. Mariota started off with the ball in the fourth and has been playing well thus far but as he scrambled out of the pocket, he throws a ball that would be picked off by Tramon Williams for his first pick of the game. For the first time in a long time, the Browns would start with decent field position but it wouldn’t matter as they can’t convert on third down yet again.

Later in the quarter, after three straight third and long conversions, Mariota found TE Anthony Fasano for a 15-yard touchdown to make it 28-13. Kessler ended up taking a huge hit on 4th and 1 but made a completion to Pryor to move the chains. After a drive where Kessler was running more than he was passing, the Browns did make it to the Titans 5-yard line to potentially score with 2:10 remaining in the game. A slant route by Pryor would give the Browns a touchdown but fail the 2-point conversion. The Browns would try the onside kick and recover the ball with 2:05 left in the game and look to somehow get 10-point in that time. Another rough possession for Kessler but somehow he ends up in the redzone for the 2-yard Duke Johnson Jr. touchdown with another onside kick ensuing but couldn’t recover and the Titans win a close one 28-26.

The Browns, still looking for their first win, take on the Cincinnati Bengals