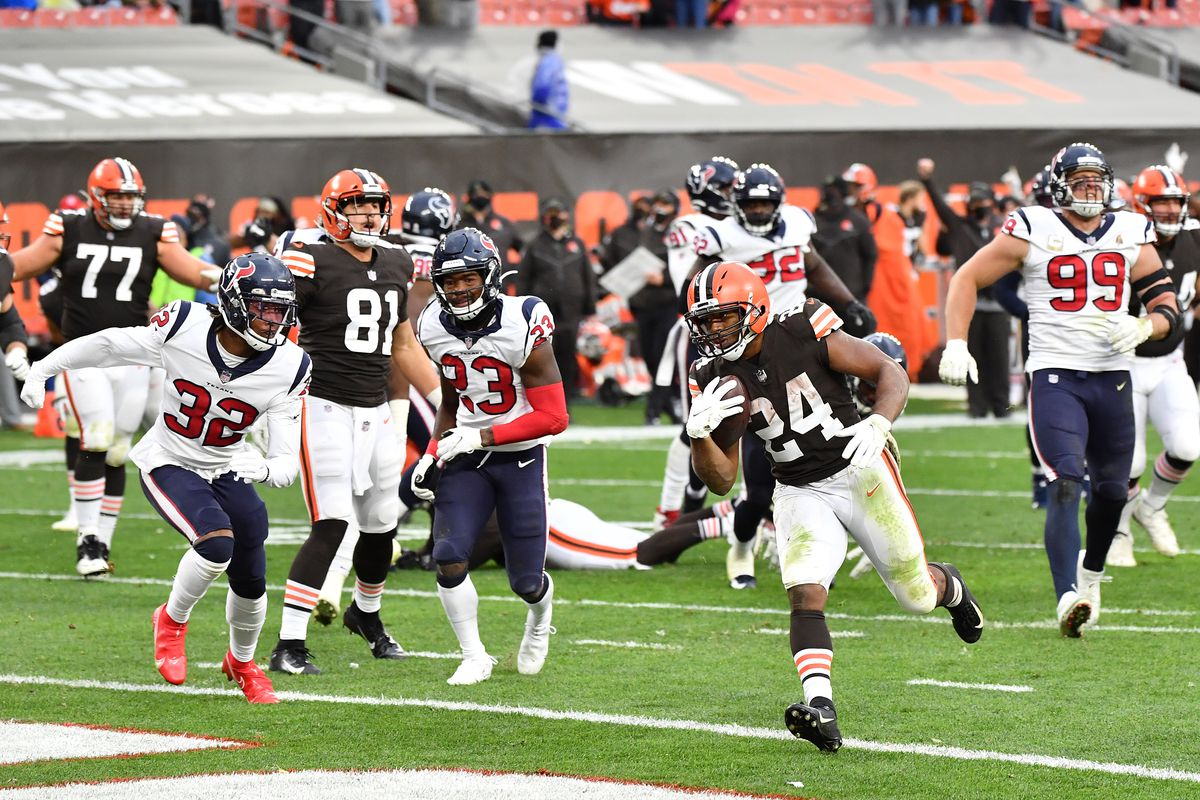 The Cleveland Browns return to the field following the bye week ended up being pushed back roughly 30 minutes due to inclement weather.

However, once things got going the Browns fought hard, riding their dynamic duo of running backs to a 10-7 victory over the Houston Texans. Opening the game with the ball, the returning Nick Chubb helped carry the Browns offense down the field deep into Houston territory.

After facing a third and one at the seven, a fumbled snap from center J.C. Tretter to Baker Mayfield halted the drive after Mayfield would be forced into an intentional grounding penalty to force a Cody Parkey field goal. After taking the lead, the Browns defense would force a three and out.

Thanks to a sack from Myles Garrett of Deshaun Watson on third down. Despite momentum being in their favor, the Browns offense failed to get a first down themselves on the ensuing possession, clinging to a three point lead in the first.

The Texans offense took over with five minutes to go in the first, putting together an impressive drive into the second setting themselves up with a goal to go situation.

To no avail, as the Browns defense would stand tall on fourth down from the two yard line, stuffing Watson from reaching the end zone. With the weather hindering much of the offense, both teams would trade punts before the Browns offense took over with just over four minutes to go in the half.

After taking over, the offense finally got going for the Browns behind a big 18-yard third down catch from Rashard Higgins to keep the drive alive.

The Browns drove all the way to the Houston 37, before two straight incompletions on third and fourth down respectively gave the ball back to the Texans to end the half. The Texans got the ball after the half facing a three point deficit.

Former Brown Duke Johnson Jr. got the half going with a long 23 yard run. The defense for the Browns would clampdown, forcing three straight Watson incompletions and a punt. After two straight six yard runs from Chubb, the Browns offense looked to add on. The Texans defense had other plans, sacking Mayfield on second down to halt the drive and force a Jaime Gillan punt.

After the punt, the Texans offense finally got going, putting together an impressive 13 play drive,before being forced to settle for a field goal. The weather undoubtedly played a factor as Fairbairn missed wide left to preserve the Browns shutout deep into the third.

After the momentum swing of the missed field goal, Nick Chubb ran the Browns offense all the way down the field. Chubb punched in a nine yard touchdown to cap off his work to give the Browns a 10-0 lead into the fourth quarter.

After the score, a quick three and out from the defense had the Browns offense looking to put the game away. Despite some movement however, the offense would be forced to punt after a third down Mayfield incompletion at midfield.

Down two scores with eight minutes to go, it was desperation time for the Texans. The offense capitalized on relaxed defense from the Browns, taking only 9 plays before Watson found Pharaoh Brown in the end zone for a 16 yard touchdown to cut the Browns lead to three. The Browns offense took over with less than five minutes to go with the goal of running out the clock.

They did just that behind the two-headed rushing attack of Kareem Hunt and Chubb. The two backs combined for two first downs that took three minutes off the clock, before a 59 yard third down run from Chubb would seal the deal. Chubb ran away from the defense and had the opportunity to score. Opting to step out of bounds at the 3-yard line to allow for two Mayfield kneel downs to end the game.

It may not have been the most aesthetically pleasing game, but the Browns offense proved they can use their rushing attack to grind it out bad weather to win tight games. Beating the Texans 10-7 and moving to 6-3 on the season in prime position for an AFC Wild Card Playoff spot.