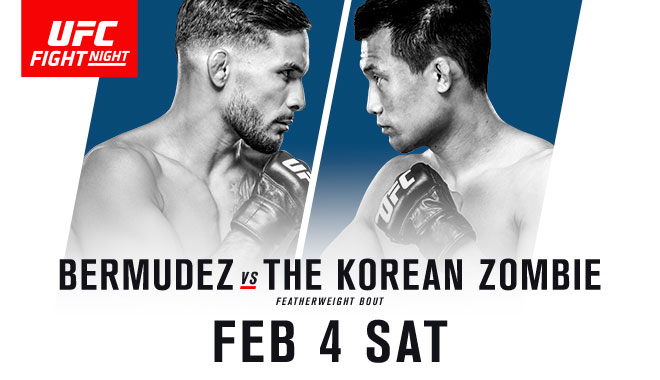 The UFC takes over Houston on Saturday night, just one day before Super Bowl 51. The card is headlined by Dennis Bermudez and “The Korean Zombie” Chan Sung Jung, who returns from his military service.

The other fights feature a top prospect in Alexa Grasso, two impressive Strawweight fighters in Jessica Andrade and Angela Hill and Ovince St. Preux trying to get back on track. Without further ado, here are my picks for UFC Fight Night Houston.

Jessica Andrade vs. Angela Hill– Andrade is on a warpath right to UFC Strawweight Champion Joanna Jedrezjczyk. She continues to bulk up her resume with a submission victory over Hill.

Anthony Hamilton vs. Marcel Fortuna– Hamilton is looking to bounce back from his loss against Francis Ngannou. I think he does against a crafty Fortuna.

Ovince St. Preux vs. Volkan Oezdemir– The fall for OSP continues here, as he is matched up against Oezdemir. Oezdemir is a fighter not many people have heard of. I think Oezdemir controls the ground game and wins impressively against St. Preux, lowering OSP’s stock even more.

Abel Trujillo vs. James Vick– Trujillo is a monster who possesses a great deal of knockout power. Though Vick holds the height and reach advantage, I see Trujillo closing the distance and making this a short night for Vick.

Alexa Grasso vs. Felice Herrig– Though Herrig says she will not be a stepping stone for Grasso, I just can’t see the fight going in her favor. Grasso is such a precise fighter and can turn up the pressure in the blink of an eye. Grasso will win here, but I think Herrig has enough heart to go all three rounds.

Dennis Bermudez vs. Chan Sung Jung– “The Korean Zombie” is back. In a Featherweight Division that is currently in a weird spot with Jose Aldo and Max Holloway, Jung can jump into the top contender spot in a hurry. Bermudez is a solid first test for his return, but Jung will not disappoint. Jung gets the finish after a few rounds of getting reacquainted with the Octagon.