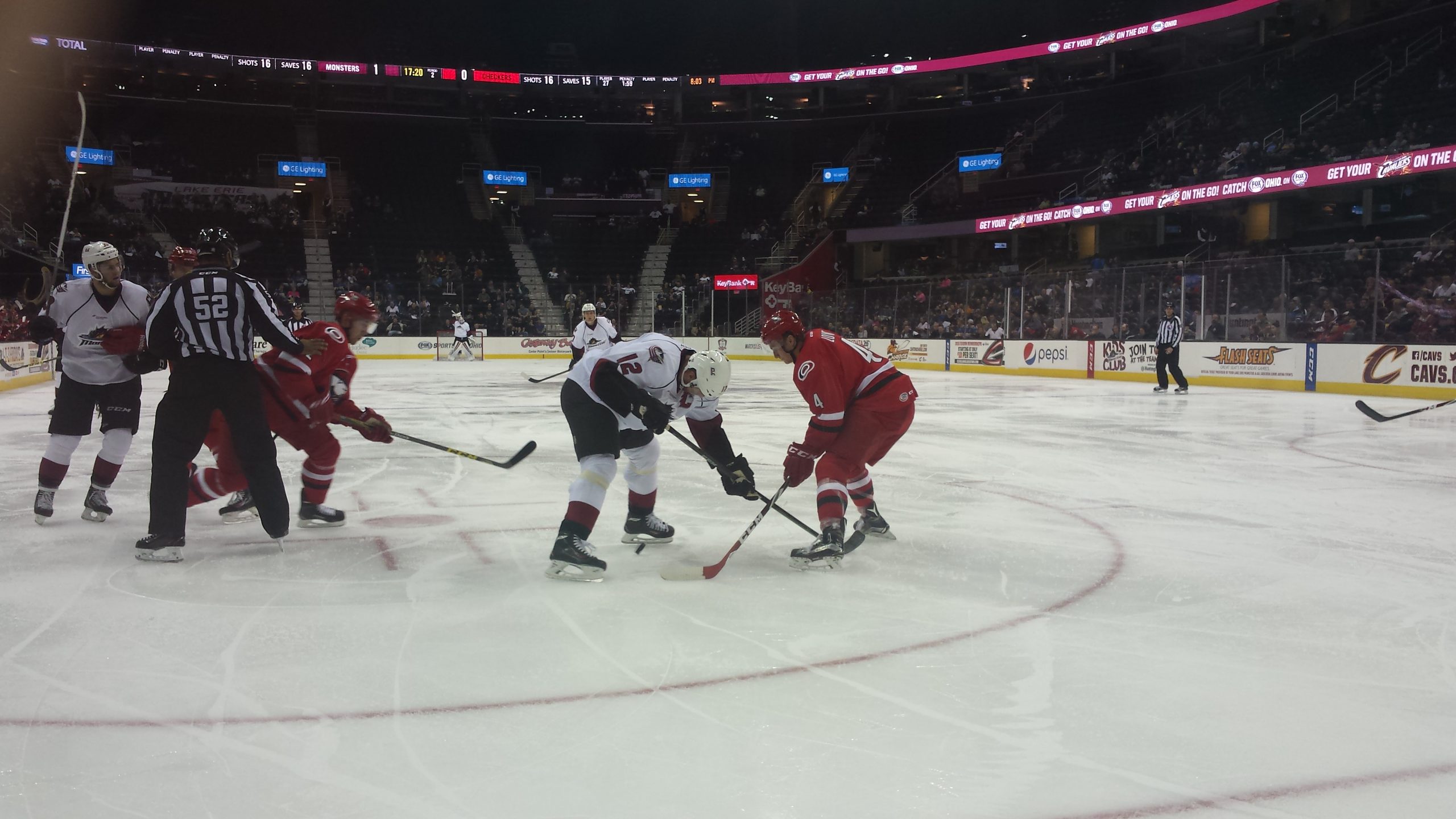 CLEVELAND– The Lake Erie Monsters took on the Charlotte Checkers in a hard-hitting game in which the Monsters prevailed, winning 3-2.

They improved their record to 4-1-0-1, are solely in first place in the AHL Central Division, and have won three in a row.

The Monsters scored their first goal on a power play in just 5:39 into the first period.

The goal came from Markus Hannikainen, on the assist by Kerby Rychel and Sonny Milano.

It was Hannikainen’s second goal of the season. At the conclusion of the first, the Monsters had 13 shots, and 13 saves to the Checkers 13 shots, 12 saves.

Checkers Brody Sutter, assisted by Brendan Woods and Patrick Brown, put the puck passed Monsters goalie Anton Fosberg with just 6:48 remaining in the second period to tie the game at one.

Just a minute and a half later, Monsters Oleg Yevenko answered and scored his first professional goal to put them ahead 2-1.

Rychel, assisted by Hannikainen and T.J. Tynan, scored the Monsters third goal with 1:25 remaining in the second to extend the lead to 3-1. It was Rychel’s third goal of the season.

The Checkers cut the lead to 3-2 at the 7:36 mark in the third when Trevor Carrick, assisted by Phil Di Giuseppe, scored his fourth goal of the season.

With just over 14 seconds left in the game, the Checkers iced the puck, and had to put their goalie Drew MacIntyre back in the net during the defensive face-off.

The Checkers did win it and get the puck back, but it wasn’t enough as time expired. There was a bit of the scrum as the final horn sounded between the two teams.

“I don’t know that I would call it convincing to be honest with you. I didn’t think we were great tonight, and that’s the truth. We found a way to win, and that’s the sign of a good team.”

Coach Bednar did talk about the excellent play from Monsters goalie Forsberg and Rychel to just name a few.

“We didn’t play up to our full potential, but we found a way to win”

Forsberg withstood 33 shots, and had 31 saves.

The Monsters next game is right here at the Q on Saturday, where they face the Checkers once more with a 7pm faceoff.

I expect the game could get a little chippy after the way Thursday’s game ended.

Photo Gallery: Monsters Back on the Ice at the Q; Top Charlotte 3-2
Rychel and Forsberg Take Home the ‘Golden Skate Awards’ in Monsters Win Over Checkers