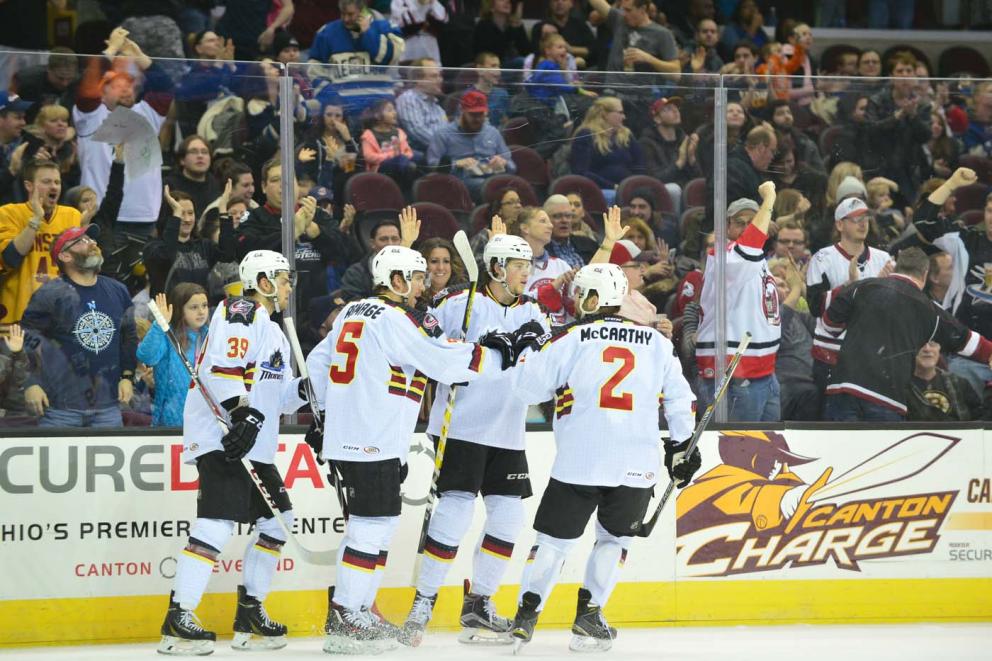 The Lake Erie Monsters (29-17-5-4) looked to complete a three game sweep in three days as they hosted the Rockford Icehogs (30-14-5-4) for their second game in a row. The Monsters won the contest Friday night in a 5-4 thriller. Saturday night was a thriller, as well, as the Monsters extended their win-streak to three games with a 3-2 OT victory, thanks to a game-winning goal from Daniel Zaar.

Lake Erie didn’t seem to show any signs of fatigue early as they were aggressive in getting a lot of shots off in the first period. While they only had 12 shots on goal, they easily fired close to 20 shots as most of the hard-hitting slapshots sailed wide or high of the goal.

A break for the Monsters came with 8:09 left in the 1st, when a sloppy powerplay pass for Rockford was intercepted by the Monsters Josh Anderson leading to a breakaway shorthanded goal, giving the Monsters the early 1-0 lead.

Defenseman Oleg Yevenko added on to his AHL leading 140 penalty minutes late in the first after defending starting goalie Anton Forsberg with a slashing penalty.

The penalty was essentially wiped clean after John Ramage was clotheslined 30 seconds later and the period ended with the Monsters leading 1-0.

Rockford struck first in the second period. After a faceoff in the Icehogs zone traveled all the way down into Monsters territory, Forsberg’s pass off the boards went directly to Ryan Haggerty , who passed it to Mark McNeill who shot it in the back of the net to even things at one.

The game took another turn a little bit under halfway through the second. Lake Erie found themselves on the powerplay and despite some good shots on goal, could not score. Late in the powerplay, another hooking penalty by Rockford would give the Monsters a five on three.

Seventeen seconds later, Rockford committed yet another penalty leaving three guys in the penalty box and a lengthy five on three for the Monsters.

Oliver Bjorkstrand took advantage and found the net for his thirteenth goal of the season and giving the Monsters the 2-1 lead. Despite having a regular powerplay for another minute, the Monsters were not able to capitalize. Rockford had some decent shots on goal late in the period, but it ended with Lake Erie still leading 2-1.

The third period did not have the big exciting moments like there were in the first two periods. Instead, this period consisted of a lot of physical plays and less shots on goal. There were numerous checks into the boards and on players to break up passes and possessions.

Rockford controlled most of the third in terms of play and they also added the only goal of the period. Center Vinnie Hinostroza skated down into Monsters territory before sending a beautiful behind the back pass that ended up finding Ryan Hartman in front of a wide open part of the net. There was nothing on the play for Forsberg to do as Hartman netted his fourteenth goal of the year to even the score at two.

Overtime would decide the outcome of this one. Rockford had opportunities early in the overtime. An early shot missed just wide of the net. On a subsequent play, they had a shot at a wide open net before the Monsters defense fled to the puck to knock it out of their territory before an Icehogs stick could have tapped it in.

The second half of overtime was controlled by the Monsters. They finished with five shots in overtime but with just under 30 seconds to go, Zaar took the one that counted. His fifteenth goal of the season gave the Monsters their third win in three days with a 3-2 victory.

With Saturday night’s win and the Milwaukee Admirals’ loss, Lake Erie is now tied with the Admirals with 69 points, just one point behind division leading Rockford. The Monsters are third place in the Central Division with a .616 points percentage. The Monsters continue their tough stretch, hosting Milwaukee on Tuesday and Thursday before heading to Rockford for two next weekend